Last month, I tagged along when Andrew had a conference to attend in Washington, D.C.  While I grew up in both Northern and Southern Virginia, as well as Philadelphia, I realized it has been AT LEAST two decades since I’d played the tourist in our nation’s capital. It was high-time I went back.

Because we drove, I also worked in my annual ‘college girlfriends’ visit.  We stopped in Pottstown, PA, on the way down and spent the night with Leslie and her family.  Andrew had a blast entertaining their three kiddos and the adults got a kick out of a CNN 2000’s music special on TV that night.  Can it really almost be TWENTY YEARS since we graduated from high school?!

We arrived in DC the next afternoon and after some exploring and dinner, we visited POV, a rooftop bar with a view of the White House (illuminated below).

The view was spectacular and the vibe was very ‘big city.’  It was a Monday night, everyone was still in their work clothes (or nicer!) and I suppose they were going to go home, wake up early and do it all over again the next day.

The next morning, after a rainy run around the National Mall, mom and dad met me downtown for a day of sight-seeing!  My parents live in Manassas, which is about an hour outside the city, and you’d think they’d come in every once in awhile to visit a museum or get dinner.  Nope.  It’s probably been TWENTY YEARS since they’ve been tourists, too!  (Although I totally get it; jobs, house projects, travel…there is just never enough time!)  I was touched they made the trip in to see me.

Andrew met us during his lunch break and we had Thai in Chinatown.

We toured the International Spy Museum, which had been a hit with my mom and brothers years ago.  Leslie mentioned how much she liked it as well, and it happened to be just a couple blocks from our hotel, so it was a convenient destination.  I especially liked their ’50 Years of Bond’ exhibit, going on right now.

The following day, I was all on my own.  I started my morning with some devotions and HGTV before heading out the door.

I’d asked Bets, my other college bestie, for restaurant recommendations during our stay.  She and her husband, Josh, are stationed at the Pentagon and live in Old Town Alexandria.  She gave us a long list, and highly recommend A Baked Joint, which happened to be just a few blocks from our hotel. It’s a super-hipster bakery/café and I fell in love immediately.

Andrew met me for lunch and I enjoyed a thai iced-tea and a bacon-and-pimento cheese sammy.  (Photo not included, as there were already WAY too many photos in this post.)

MY afternoon was spent museum-hopping, with lots of walking in-between.  During a walk to dinner (a swanky steakhouse at which I got truffle mac n’ cheese WITH lobster–‘amazing’ doesn’t even begin to describe the deliciousness) the night before, this advertisement caught our eye:

I mean, how could it not?

The National Geographic Museum was featuring an exhibit on the Titanic, and I thought it sounded like a great opportunity to check out something I was interested in that Andrew wouldn’t be bummed to miss.  I thought the most interesting part was HOW the Titanic was actually found–as part of a classified U.S. Navy expedition to find the remains of two nuclear submarines, lost in the 1960’s.  Read more here. 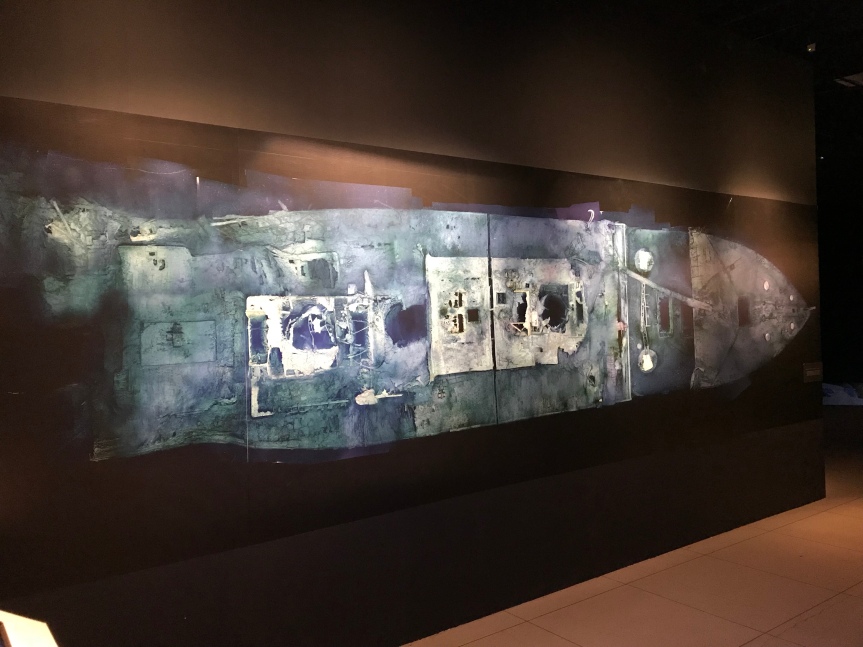 While there, I also saw an exhibit on The Church of the Holy Sepulchre, which is believed to be built atop the site of Jesus’s tomb.  It was a neat 3-D experience, made possible after a recent cleaning and documenting project.  It kinda made me want to visit Israel. 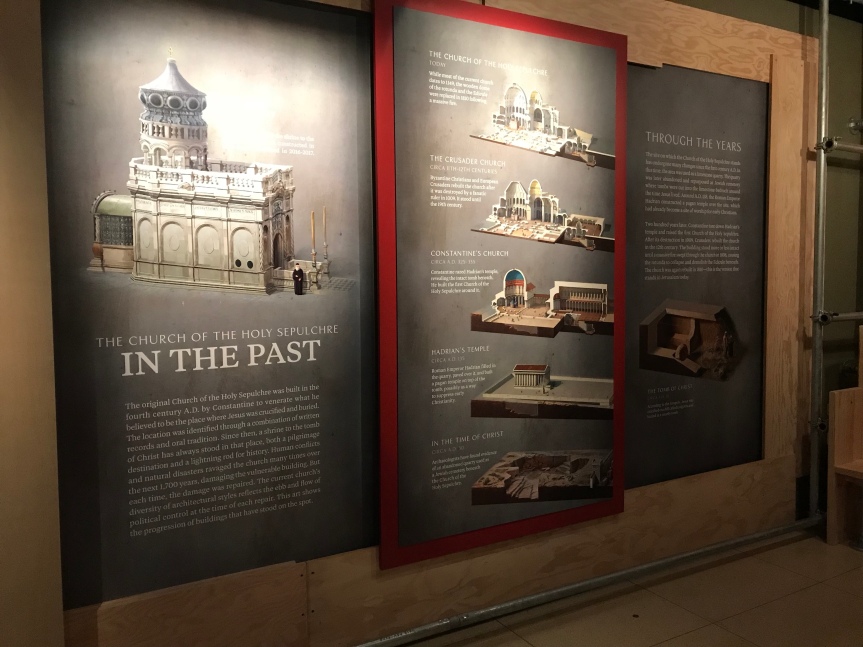 From there, I walked back to the National Mall, passing Trump International along the way. 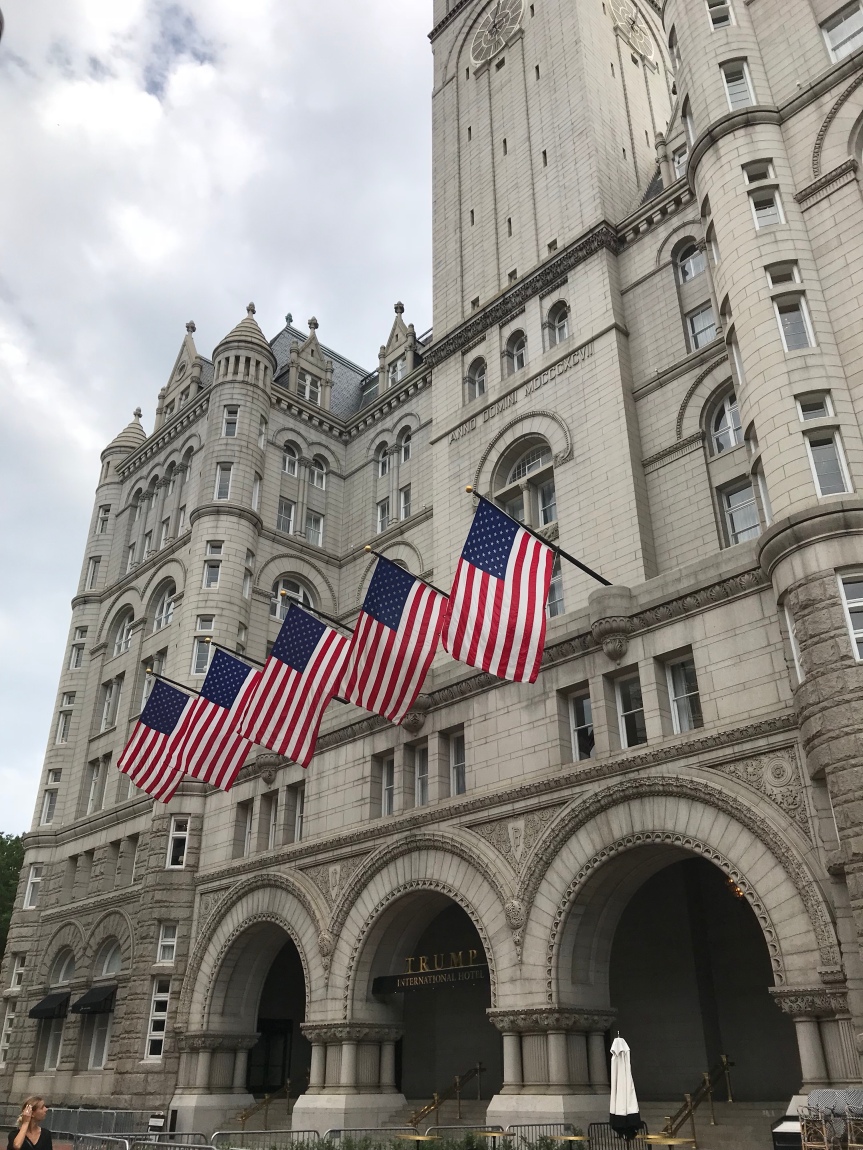 My destination was the Hirschhorn National Museum of Modern Art, located just off the National Mall.  I have a thing for contemporary art, although I’ve gotten myself into trouble before with exhibits that are a bit TOO modern for my taste…

The Hirschhorn is a round building, and I enjoyed some of Georg Baselitz’s upside-down portraits very much. 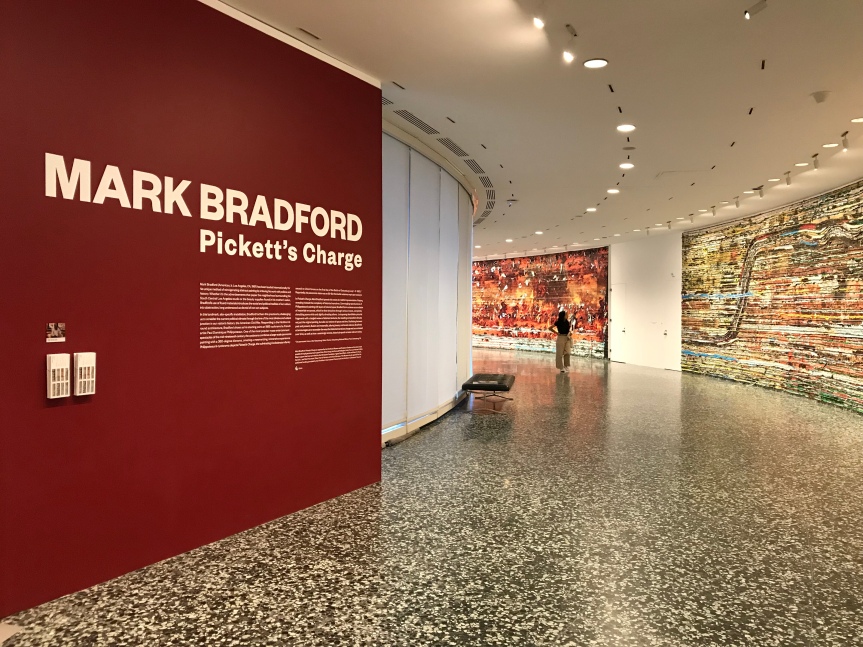 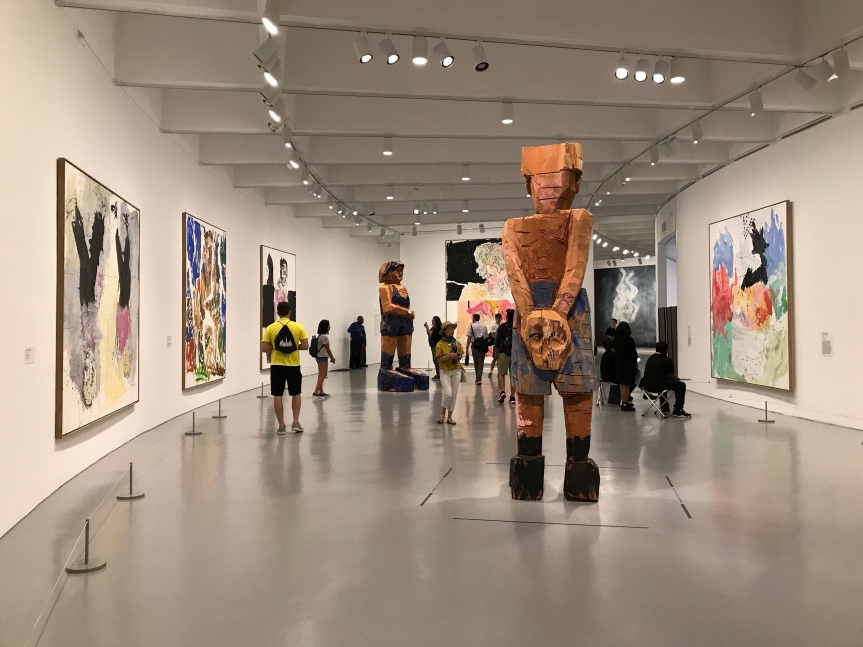 On my walk back through the sculpture garden, I came across a (very photogenic) Monarch butterfly: 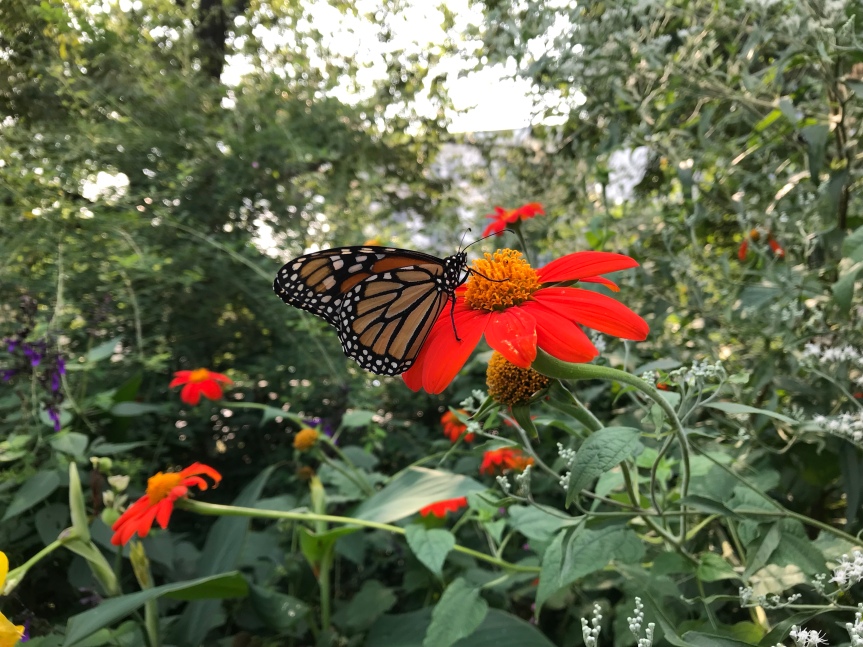 The following day was our last, and I knew I wanted to spend more time at my new favorite bakery.  This time, I couldn’t decide between their amazing bread (I mean, it IS a bakery), and their savory oatmeal, which sounded like the most unique and ‘least likely item to be made at home.’  It’s oats, but instead of toppings like fruit or nuts, it featured kale, prosciutto, caramelized onions, pecorino and a runny egg.  In a word, DIVINE.  It might need to be recreated at home this winter.

Andrew finished up around noon, and we scurried off to get some more sight-seeing in before heading to my parents’ house for the night.  Our first stop was the National Portrait Gallery, which proved to be much more than paintings of stuffy old men.  The entire first floor was museum-like, including a portrait of Pocahontas, in which she looks like a caucasian young man, and tiny photos of Lincoln’s contemporaries.

The highlight was the presidential portrait gallery, and I loved some of the more modern pieces, especially the geometric diamond pattern of Bill Clinton’s and this one of John F. Kennedy.

I loved this fun one of JJ Cool J…and Andrew.

On the top floor, the portrait gallery houses some modern and contemporary pieces.  This map of the United States with televisions–each state featuring something iconic, like potatoes in Idaho–was especially fun.

After a bite at another Betsy-recommended restaurant, Zaytinya, we ran over to the National Gallery or Art.

We enjoyed the whole gamut of paintings, from tiny, unrealistic Mary and Jesus paintings, to the Impressionist and the Dutch Masters. 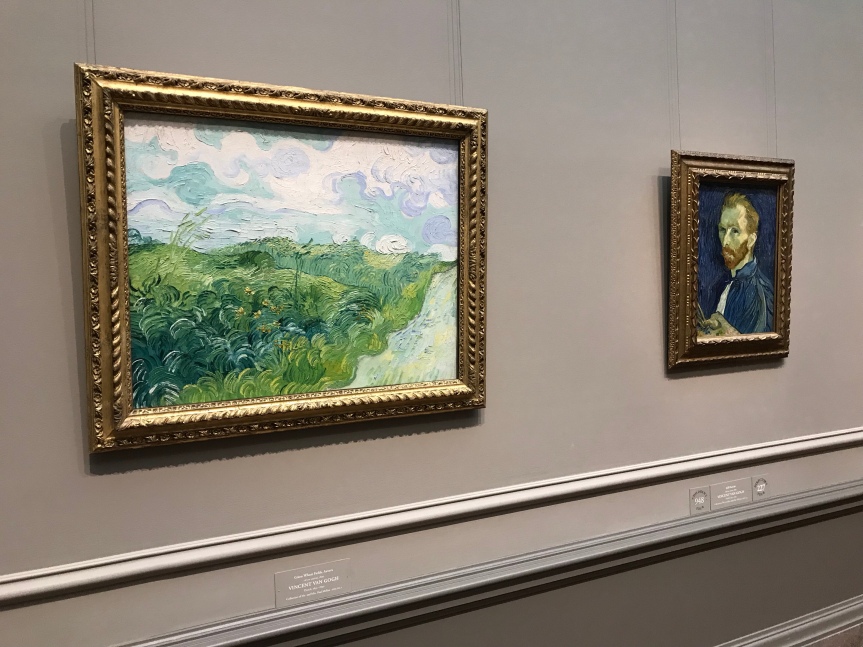 Who could forget Henri Toulouse-Lautrec?  He’s a favorite of mine. 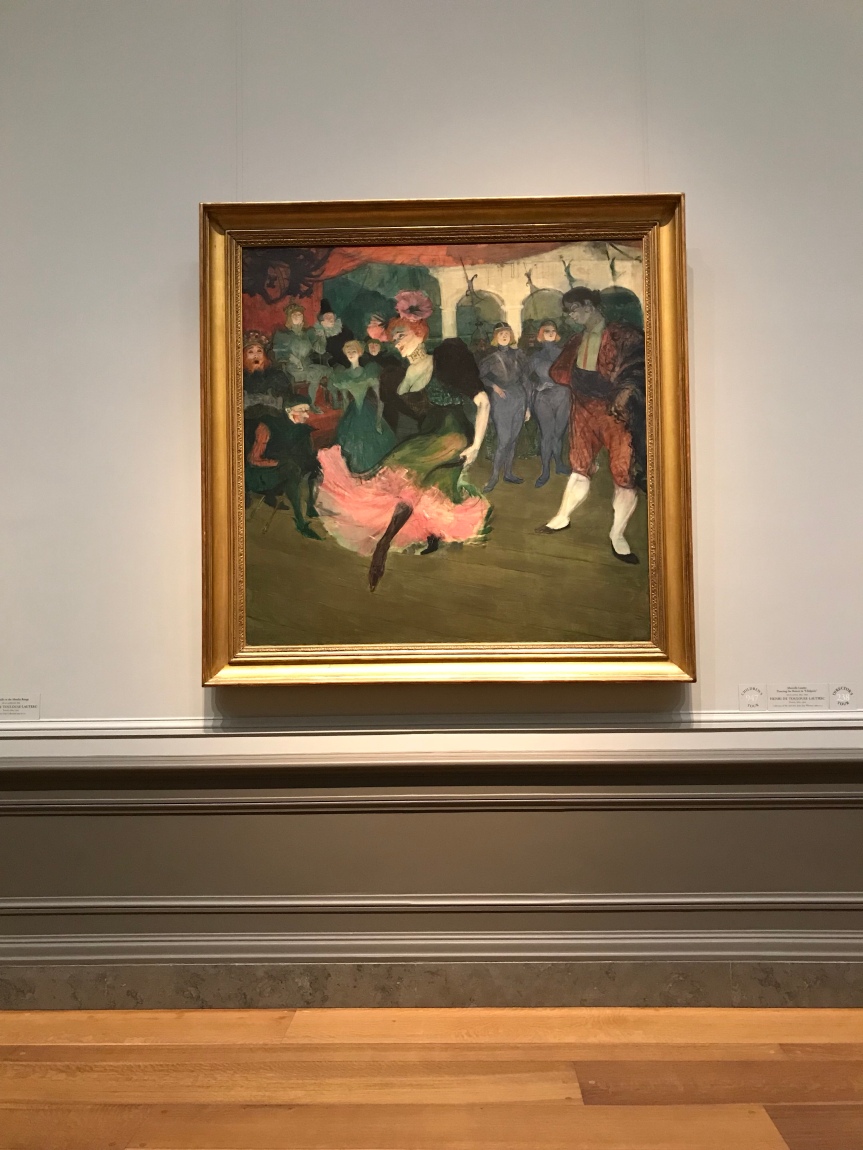 After our trip last summer to the Netherlands, I’ve really started to appreciate still life with food.

We spent our last night in VA with my dad (mom was flying), and then stopped for lunch at Wendy’s house in Hershey, PA on way home the next day.  We loved seeing their farmhouse and barns, and hearing all their plans to expand–both with buildings and animals!  Sadly, I took NO PICTURES with my girlfriends!  How did that happen?!