Yes, folks, you heard that right.  We had a major injury this week; Andrew tore his Achilles tendon at basketball Wednesday, which prompted a 4-hour stay at the local after-hours urgent care, in addition to a heck of a lot of craziness.

Not sure why I couldn’t manage to get a blog post out about it until just now–I do remember wanting to snap a photo while we were in the waiting room, except every time I thought about it, Andrew was playing with my phone.  As in, the phone with the camera in it.

And I’m not sure why I couldn’t manage to publish any of the already written posts I have sitting in the queue (since that is precisely what they are there for)…busy week, I guess.

ANYWAY, Andrew is laid-up with surgery scheduled Tuesday.  He’s definitely in some pain but has a hefty painkiller prescription, and is thoroughly enjoying Netflix’s instant streaming.  (A service we cancelled awhile back and he re-ordered just this afternoon in light of his couch-bound state.  Hmm…is that how things get done around here?  What kind of ailment can I come up with that will get me a re-attached basement door and some furniture???)

Thankfully, it’s his left foot, which means that–technically–he CAN drive (heck, he drove himself to urgent care!), and will be able to to so at some point soon.  Until then, he can bum rides to work with his dad and he’s pretty good on crutches.  Gosh, it’s been a HUGE BLESSING having Andrew’s parents here.

And another thing: I’ve learned I’m not a nursemaid.  Like, AT ALL.  I’m just not a nurse.  I’m not compassionate (not that I’m mean, I’m just not overly caring, I suppose) and totally thoughtless.  Maybe I’m just distracted right now with school.  In any case, pity Andrew–I love him to death and I do try to help, but it’s definitely NOT my gift.

So, that’s the biggest news of our lives right now.  As early as the night it happened I was already considering it a blessing; it’s forcing us to stop our house projects and relax (well, he can; I still have school!) and spend time in the same room together.  I mean, if Andrew can manage it I’d really like a couple quick things done here before we totally call it quits (like that basement door and the drapes), and maybe he can just talk me through some of these tasks, too.

We also postponed our house-warming party, which has given me such relief it’s not even funny.  In all honesty, a couple days ago I started getting a bad feeling about the party–just that I wasn’t ready nor was I looking forward to it because of everything else on my plate–and between Andrew’s injury and finding out our new couch won’t be here until DECEMBER (Lazy-Boy, I am SO UNIMPRESSED I can’t see straight–probably a post all its own), in addition to school projects and the fact that we still haven’t gotten any more furniture or lamps….well, I was a bit stressed.  We’re thinking January might be a better time for it.

I’ve already single-handedly raked and disposed of every leaf in our yard.  Last night.  For three hours straight.  THREE HOURS. 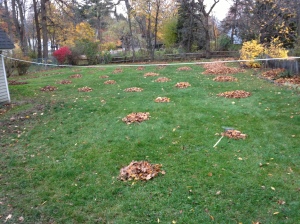 I was out loading leaves into a trash can and hauling them to the curb in the dark.  You bet I earned those BBQ wings I wanted!

In other news, school is–just like always–completely insane.  If it isn’t one class, it’s another.  In the past week or so, I’ve had two tests, the first part of a project (to be blogged about later, I hope), and a test, two more projects, a quiz and an essay in the next week. And an article to write.  And packages to mail (sorry Heather–your b-day/care package will be in the mail Monday).  And I’ve got to get to Wegmans tomorrow–we’re out of spinach!  And I have to do research for one of the afore-mentioned projects.  I love that I can do homework at Wegmans.  Sort of.

Here’s a quick pic of one of my project groups:

I’m in the back peeking over two of the girls.  We had to come up with 10 recipes (5 regular, 5 fat-modified), and had the rest of the people in our lab cook them and perform a blind taste-test.  That was Wednesday, now THIS coming Wednesday we present our findings and a bunch of information as well as fat-reduced products you find at your grocery store.  I made two versions of fried chicken, and I’ll blog about it later.

The poor guy’s been sleeping on it almost completely flat for awhile now.  We just use packing peanuts from the UPS store.  You’d be amazed how they flatten over time…

Well, that’s a good summary of the past week or so.  Prayers for Andrew’s surgery and my sanity are greatly appreciated!

Did I really forget to post “finished” photos???  Forgive me if I did…I vaguely remember posting one before we had the appliances hooked up, but here are some shots of the (mostly) finished product:

Isn’t it lovely?  Andrew did a fantastic job.  I have plenty of room to work, and because I have the storage drawers beneath the appliances, I don’t need a cabinet or anything additional taking up space.  I do still need a rod of some sort–somewhere–to hang clothes, and we’re still in the process of attaching part of the door handle.

I was stressing about where to hang the colored-bottle print (it was am impulse buy before we moved in hopes of hanging it in a WHITE kitchen) since there didn’t seem to be anywhere in this house in which it would ‘go,’ but the green in the laundry room was perfect!  The other walls seem a bit bare, so I’m sure in time I’ll decorate them, as well.

Andrew promised they’d be done this weekend, and they were. 🙂

Now, we just have to figure out a way to fix the ceiling without repainting THE. ENTIRE. THING.

There was an error retrieving images from Instagram. An attempt will be remade in a few minutes.