Guys!  I started something.  I think.

Since we moved to East Aurora, we’ve traditionally stayed in town and done Thanksgiving with Andrew’s parents, which means we eat early (like 1:30) and I can’t go downtown for the YMCA Turkey Trot. The 8k (5 miles) race began in 1896 and is said to be ‘the oldest continually run footrace in North America,’ and is capped at 14,000 runners each year.  It’s a huge deal around here, full of costumes and a great post-race party.  Logistically, however, it’s a nightmare; parking is no where near the start, and with that many people, and a 9 am start, there is no way I’d be home before noon.

So, you can imagine my disappointment each year to miss out on such an exciting and hallmark event in our area.  For the last couple years, I’ve done my own exercise Thanksgiving morning, from a simple run to a ‘Gobble ’til You Wobble’ workout full of squats and lunges.

This year, I posited an idea to our running group, which has grown to 20+ people who come out on Thursday nights for our weekly runs.  Why not have our own race here in East Aurora??  With my heart racing, I posted the idea to our Facebook page and waited.   There HAD to be more people like me whose cooking responsibilities precluded them from doing the run downtown, right?  But what if people hated it?

They didn’t hate it.  While many of our runners are loyal to the downtown event–and will continue to be–I got others who said they’d be interested in doing the run, or perhaps next year (as they were already signed up for the other one). In the days leading up to the run, I promised baked goods as a post-race goodie, made a sign and planned a route.  A small handful came out, and I was thrilled when one of our regulars brought her husband along, too.

Seven of us ran the inaugural ‘Turk-EA Trot’ (name compliments of a friend) and had a blast.  The weather was mild, a few came in costume, and we brightened the smiles of those we passed on the road.  Once we finished and were enjoying some coffee from the East Aurora Cooperative Market (where we met), multiple passers-by were interested in our run and lamented that they hadn’t known about it.  I explained that I’d only mentioned it to the running group, but that we planned to do it again next year!  The general manager at the co-op, a friend, was psyched to see us using the store as a meeting place (our new weekend morning run starting location, FYI) and promised help with the run next year.

I’d be lying if I said I hadn’t already had visions of becoming a ‘race director-extraordinaire’ with that first Facebook post.  I’d love to one day have real registration and t-shirts and goodie bags and road closures.  To attract runners from not just East Aurora, but from Orchard Park and West Seneca and Elma.  To have costume contests and prizes. For now, I’m happy to do some homework on what it takes to become a real race, and bring treats for those who come out next year. I’ll bake until the race is too big! 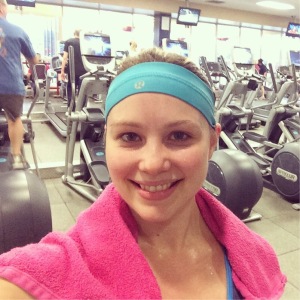 Then, after a 10-minute break, we began our 30-minute cycle, in which I was able to ride 18.8 miles.  I set the bike at about a 9 or a 10 for resistance and just pedaled as hard as I could at a pace I thought I could withstand.  I couldn’t believe how tired I was after simply swimming for 10 minutes!  The fatigue soon wore off and I was able to go at a brisk, even pace the entire time.

Lastly, after another 10-minute break, we headed upstairs to the treadmills and hopped on for 20 minutes, in which I ran 2.8 miles.  This was the trickiest part for me, as I wasn’t sure how fast to set the treadmill at the beginning. I asked Andrew for advice and he suggested starting all-out, and backing off later if I got tired. I set the treadmill to 7-minute miles and only got faster from there!  Lesson learned:  you really can go faster and harder than you think.

When all three heats were finished–approximately 15 people–they announced the 1st, 2nd, and 3rd places for men and women…and not only was I the first-place woman, I happened to accomplish the most distance in all three events!

This was the second annual ‘Tri at the Y’ held at the Southtowns YMCA. I didn’t compete last year–must have been out of town–but I definitely think this is something I would do in the future.  Speaking of the future…perhaps I should take up triathlons!

By posting this recipe I am entering a recipe contest sponsored by The Beef Checkoff and New York Beef Council, and am eligible to win prizes associated with the contest. I was not compensated for my time.

After reading about an upcoming recipe contest in a monthly New York State Academy of Nutrition and Dietetics (NYSAND) email newsletter, I decided to start brainstorming what I might want to submit.  The contest is open to dietitians, diet techs, dietetic student interns and members of the Academy of Nutrition and Dietetics in the Northeast. The parameters were such that the recipe had to include a 4-oz lean cut of beef and 2 servings of fruit or vegetables, either in the dish or on the side. Starting Nov 14, you can vote for my recipe at http://www.nutritioulicious.com/. Voting ends Nov. 20.

Red meat still seems to get a bad wrap in the health arena, and it’s truly unfortunate and not true!  Beef is an excellent source of vitamins and minerals, including iron, vitamin B12 and zinc.  The majority of beef cuts are lean, and a 3-ounce serving provides 25 grams of protein.  As a dietitian, I recommend 20-30 grams protein per meal to help maintain a healthy weight and promote satiety.

I wanted to come up with something truly unique, and reached out to the hubby for help.  He immediately suggested I include a spicy pepper sauce we had on a trip to Spain a few years ago.  I ran with it, incorporating another food item we found all over the place in Spain: the tortilla, which is like an omelet with potatoes.  It’s topped with an incredibly flavorful pepper sauce, called ‘Mojo Picon,’ that goes well with just about anything.  We’ve eaten the tortilla for breakfast and dinner, and liked it equally well. 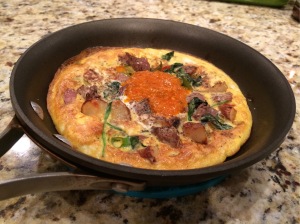 Put all sauce ingredients into a blender or food processor, pulse until smooth. Makes approximately 2 cups; store in the refrigerator in an air-tight glass jar for up to 10 days.

Pre-heat oven broiler.  Heat a large non-stick skillet or cast-iron skillet over medium heat.  Add chopped peppers and onions, sauté until soft.  Add cut-up potatoes and spinach,sauté until greens are wilted.  Add cooked meat to skillet, and cook just until heated through. Turn heat to medium-low and pour eggs into skillet but do not stir.  Cook until edges begin to solidify; when the middle of the omelet is still runny, place skillet under broiler for 3-5 minutes.  Slide omelet out of pan and onto a plate, cut into four wedges and top with Mojo Picon Sauce.

Check out the other contest entries here!

The 5th Annual Turk-EA Trot went off without a hitch! We had beautiful weather, top-notch volunteers and a whopping 352 runners! There are too many people to thank here, but one thing I’m grateful for this year is all the help I had pulling off this race. I’m already looking forward to next year! #turkeytrot #turkeatrot #thanksgiving #eastaurora #eastaurorarunners #racemanagementsolutions
Loading Comments...