I went on a special adventure yesterday with Mrs. Nye.  She invited me to join her on a trip to Lantz’s Bulk Foods, about a 30-40 minute drive (we took a few detours, so I’m not sure exactly how long it would take if you were heading straight there).  It’s in Wyoming County (or maybe Lancaster?), near where Mrs. Nye grew up, and is run by an Amish (or Mennonite, I’m not sure which) family.

What a gem it was!

They had a small cafe (cafe implies it was cute and fancy, which it wasn’t; think more utilitarian, perhaps even the kind of hole-in-the-wall place only the locals go), a refrigerated meat and cheese case, a small section of books and cookbooks, and aisles of dry goods.

There were decent amount of people there, both eating and shopping, that it’s clear this store is a landmark among the miles of open farmland surrounding it.

Obviously, the spices and flours captivated me the most.  I walked the aisles completely, taking it all in, before I grabbed a basket and, for lack of a better word, went crazy.  The photos of my haul follow these, taken at The Valley Inn, in Warsaw.  Mr. and Mrs. Nye go occasionally and it’s been on my to-go list for awhile now–we just never think of it.

It’s in a quaint farmhouse just off the road in the middle of the village there.  I walked in and felt like I was in Bucks County, Pa., where I used to live.  The decor was very ‘Revolutionary War-era’ and classy.  In my snow boots, I felt just a tad under dressed!  (Thankfully, I’d happened to wear a nice sweatshirt and scarf, and since it’s snowy and we’re in Western New York, everyone else was wearing snow boots with their khakis, too.)

Mrs. Nye recommended the she-crab soup, which immediately made me want it.  It wasn’t until the last seven or eight years or so that I’ve come to really like seafood and fish.  Growing up, I avoided it like the plague as much as I could get away with, but now I find I really like most of it.  New Year’s Resolution no. 6 (or it is 7?): make fish once a week.  (We’ll see how long that lasts; Andrew is likely to revolt!)

My soup arrived with little crabs of puff pastry on top! 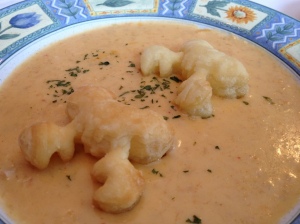 Despite my resolve to eat more fruits and vegetables and less of everything else, I had to order the rueben.  It was calling to me.  I have such a hard time ordering salads at restaurants, as I eat them so much when I’m at home.  Eating out is such an experience to me that I hate ruining it–especially my first time somewhere–by getting something I didn’t really want in the first place.

Their New York salad sounded fantastic–apples, sweet potato chips, sunflower seeds, hot dressing–but I can make that at home.  A rueben, I can’t.  (Well, I COULD, but who does that with any regularity?)

I splurged and got the fries in hopes they’d be good–they were.  Too good.  Andrew will love them.  I consider it a personal victory that I left about half of them on my plate.

I spent the rest of the afternoon enjoying a cup of coffee with the rest of the gang at the Nyes’ upon our return, and then took Hadrian out for a cold, snowy walk to Firefly Cupcakes.  (More on that shortly.)

When I arrived home, I set out my purchases to photo (and show Andrew).  Oat and rye flours (both of which I needed and at these bulk prices, I couldn’t refuse), whole-wheat couscous, tapioca, angel food cake mixes (again, about half the price of our local Tops or Wegmans!), spices and some pasta. 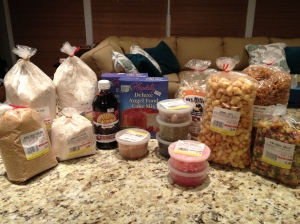 My biggest splurge: black cherry juice concentrate.  I have a cherry ice cream recipe I’ve been wanting to make for Andrew (his favorite flavor at Graeter’s) that calls for it and I’ve only seen it from King Arthur Flour, which would be more expensive PLUS shipping costs.  I threw it in the basket with gusto. 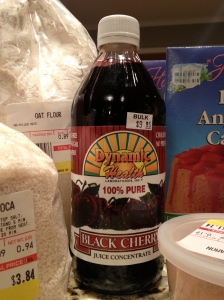 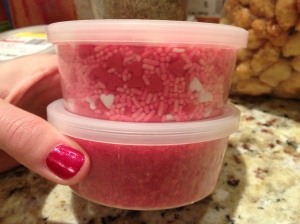 Look at that price!  Half the sprinkles would be double that at Tops.  I love you, Amish bulk foods people. 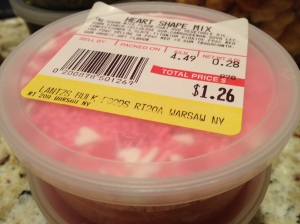 Whole nutmeg.  Interestingly enough, I’ve been wanting to grate my own nutmeg for some time now.  Andrew even asked if I needed a nutmeg grinder in my stocking this year.  I think I can use one of the surfaces on my microplane grater, but I’ll take a small mortar and pestle, as well as an electric spice grinder, honey.

I’ve found that my cookbooks, especially Barefoot Contessa’s, can’t stress enough the difference between freshly ground black pepper and nutmeg.  Just opening the lid of the nutmeg convinced me.

I wanted to get Andrew a treat for while I’m gone–heading to Ohio in just a couple hours–and I thought he’d like these: 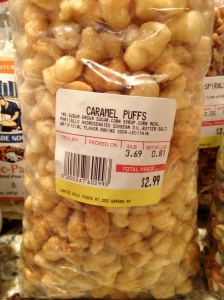 I could take them or leave them, but he’s already munched away at the bag.

OK, how awesome does this pasta look: 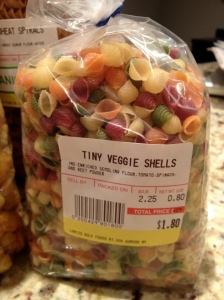 Another neat thing happened yesterday while we were out.  My friend, Wendy, the owner of Firefly, texted me asking about a hummingbird cake recipe.  Apparently they’re experimenting with a new cupcake flavor over there and she knows I like hummingbird cake.  I don’t even know why I like it so much…  Obviously, the banan/pineapple/cinnamon/coconut/cream cheese frosting combo is fantastic, but it’s more than that.  Hummingbird cake is an old, Southern tradition reminiscent of the 1950’s.  Traditional.  Home-maker-ish.  Heels and pearls in the kitchen-ish.  Everything I’m not but (kind-of) want to be, in my own, updated and modern kind of way.

I was excited.  And what a boon it was to be with Mrs. Nye when it happened.  We immediately started talking hummingbird cake recipes and baking (as if we hadn’t been already).  When we got to her house, she dug out this 1990 issue of Southern Living:

You can see she made a note, “very good,” next to the Hummingbird Cake recipe below.  Apparently, it appeared in 1978’s issue and became Southern Living’s most requested recipe!  What a treasure Mrs. Nye has right there! 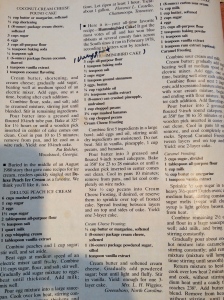 I texted with Wendy and marched myself (and Hadrian–he was in desperate need of some exercise!) over to Firefly where a sweet blonde employee (I wish I’d caught her name) ran a 2-pack of whatever iteration they’re on  out to me in the snow.

They’re a little worse for wear–I was walking a giant dog home in the snow–but good thing that doesn’t detract from taste.  Wendy thought they were a little too banana-y, and I agreed.  When I think of hummingbird cake, my first thought is of pineapple and cinnamon and coconut (which I don’t believe was in the SL recipe, but has become a well-known addition) more than banana.  My thoughts: less banana, more pineapple and cinnamon. Perfect amount of coconut.  I even found a recipe online that called for ginger, but that’s probably stretching it a bit.  I’m a huge fan, but not everyone is.  Although just a TINY bit could add a little warmth, especially with the cinnamon…

Anyway, I shared my thoughts with Wendy and am going to deliver the other one to Mrs. Nye, who has the benefit of years of baking experience and is very familiar with hummingbird cake (so many people these days aren’t), and I can’t wait to hear what she says!

As I walked home with Hadrian yesterday, as the sun was going down and despite the icy snow blowing in our faces, I could not even contain my smile as it spread right across my face.  A day spent surrounded by good food and dear friends, good conversation, asked for my two-cents on a recipe (who doesn’t like that?), and here I am, walking with Hadrian on an errand.  I even saw a friend from school who was volunteering at the co-op office!

Hadrian was happy to be outside and I was happy to take him, enjoying that I can walk to Main Street and see friendly faces along the way.  This is my hometown, now, and there isn’t anywhere else I’d rather be.

2 thoughts on “the best kind of day”