I got incredibly ambitious last night.  For awhile now, I’ve wanted to send a box of goodies to a friend of ours’ who is a single dad while his wife is deployed, and I figured I’d send her a box while I was at it.

At this same time, I happened to have been given a recipe for sour cream cut-out cookies from Mrs. Nye (who was very clear about it being the recipe of a childhood neighbor, who actually used to send them overseas as well!), AND I happened to have extra sour cream sitting in my fridge (which NEVER happens).  It was as if the stars had aligned.

I initially thought Andrew and I could tackle the job together, which we both approached with some degree of trepidation.  Let’s just say I haven’t done a good job of sharing my kitchen with others.  Resolution no. 5: don’t be such a Nazi in the kitchen.

Anyway…I invited Adam over to play games with Andrew instead, and I went about my business in the kitchen within earshot–which is just where I like to be.  I love that this kitchen allows me to be part of the action in either the dining room or living room.  (There are other things I DON’T love about the kitchen, which will be a post all its own.  I’ve had a vision!)

I SO wanted to make “2013” cut-outs, but I got rid of the giant tub of letters/numbers/seasonal shapes forever ago because I never used it.  So, I was left with cookie cutters in the shape of a pineapple, a Penn State paw print, a giant pumpkin or circle biscuit cutters.  Seeing as I’ve NEVER used the pineapple I’m sure I begged Andrew to buy, I figured now was just the right time.  And my deployed friend–an avid blog reader–would get a kick out of it.  (Hi Heather!)

I mixed and rolled and found it to be much easier than expected.  Cookies aren’t often my dessert of choice; they just seem to be too much work for nothing very impressive.  Not that I don’t have some awesome recipes–I just hate that I have to keep rolling/scooping/cooling and taking sheet pans in and out of the oven.

I decided on royal icing since the cookies were going to be shipped–I didn’t want a sticky mess!  I used Martha’s recipe (from her Baking Handbook) and subbed plain gelatin for meringue powder.  (You can also use egg whites or egg white powder, but I was fresh out!)

I had a ball decorating them–some pineapples, some circles–with tinted frosting, sprinkles and colored sugar.

The cookies turned out well–I hope I didn’t overbake them.  (I’ll find out today; Mrs. Nye and I are taking a field trip to some Amish/Mennonite bulk food store…probably worth a blog post all its own!)  The cookies aren’t overly sweet like a sugar cookie, and neither is the royal icing.  They remind me a lot of those cookies you can get from the bakery at the grocery store that are cake-y and sof and covered with a thick coat of hurt-your-teeth-sweet frosting.  You know the ones–they’re always iced with whatever color frosting is appropriate for the season.  If I weren’t mailing these, I would have slathered on some buttercream! (Because THAT’S what my waistline needs right now…)

As usual, somehow along the way it turned into FOUR boxes of cookies to be shipped, as well as a bunch sent home with Adam, and still others wrapped up to be distributed to friends in the next couple days (hello Ohio readers!).  It’s self-defense, really; if they sit on my counter, I will eat them.  ALL of them.  I left us two circles and two broken pineapples to enjoy. 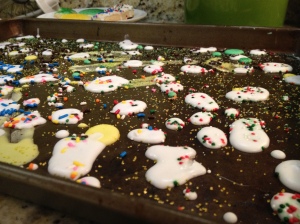 And, of course, the dishes in the dishwasher were CLEAN.  A huge, giant, can’t-thank-you-enough hug to Andrew for cleaning up my mess, and taking the dog out, and taking the trash out AND not getting impatient with me while I packed up all the cookies at, oh, 11:30 p.m. 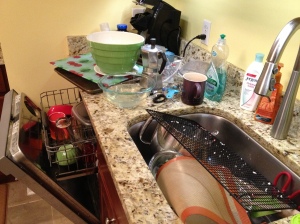 We have three friends who are single dads right now (two whose wives are deployed and one who, well, these things happen sometimes) and it’s been on my heart to show them some love lately.  Andrew stacked the boxes kinda precariously so as not to reveal any addresses…!

I’m in a state of severe lack of motivation to work out…  All I want to do is STAY IN and enjoy my house and morning and GO SLOWLY.  I’m trying not to feel guilty skipping swimming this morning, and I have been running and going to kickboxing every other day.  I think I’m just burned out.  I’ll be in Ohio in TWO DAYS with a great friend who has the same eating and working out goals as I do, so I’m hoping this weekend will be a chance to relax and rediscover my love of healthy eating (um, the sweets have taken over my life lately!) and exercise 🙂