Happy Belated Easter!  I had all sorts of fun things to blog about this weekend, but kinda took the weekend ‘off’ and this is my first chance to sit down (Not really, I still have TONS of schoolwork to do, but this is somewhat time-sensitive, too.  If I wait too long, it will be old news!) and type it all out.

There was LOTS going on this weekend for us, with Andrew’s grandmother visiting and Abigail home from school…

I ran in the Bunny Hop 5K…and scored SECOND PLACE in my age group!  Holy smokes!  Seriously…despite some of my recent PRs here and here, when I saw the 1,011-runner crowd lining up, all hopes of placing went right out the window.  In fact, I was having a bad morning due to a sudden neck spasm and stress (what else is new?), so I really had to pep-talk my way through the entire (almost all uphill, if that’s possible) race.

The neat thing was that the course went right by Andrew’s parents’ driveway!  I waved as I passed the first time… (I’m in pink and purple.) 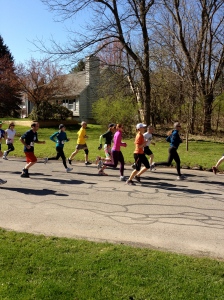 Andrew’s family (and the dogs!) came out to cheer me on… 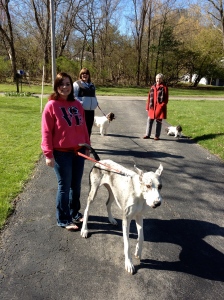 Here I am on the way back, just a 100 yards or so from the finish.  LOVE my purple running pants!

Andrew was convinced I’d placed in my age group (based on the small number of ladies who finished ahead of me), so we waited around for what seemed like forever at the finish for them to post results.

At least the oranges were good and even the store-bought oatmeal raisin cookies were decent.  Andrew ate my hot dog, but I caved and got another one and ate about half when the results still weren’t posted… 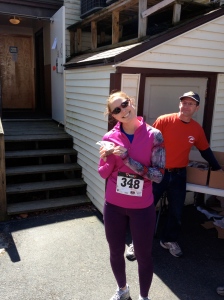 Sure enough, I DID place–I got SECOND!  Prizes for the Bunny Hop are chocolate bunnies, which, despite their appropriateness, are (in my mind) a bit counterproductive.  Carolyn had the brilliant idea to throw mine in the freezer and use it to bake with later.  It’s currently crushed into small pieces and chilling with my other chocolate.

We spent the day relaxing at Andrew’s parents’ house and running errands on Main Street.  We wanted to show grandma the new cupcake place, and while there, I picked up this little guy: 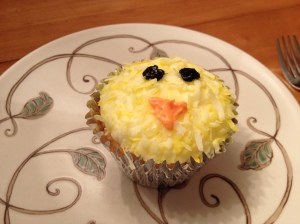 Perhaps the most memorable event was our dinner Saturday night, and, as usual, I got no photos.  We ended up at a local hibachi grill/Japanese Steakhouse/sushi bar due to our large party (8) and lack of pre-panning (it was 6:30 and we were trying to find a restaurant without an hour wait).  Can I just say the Layers aren’t big on change, ethnic food OR fish??

Let’s just say that if Carolyn’s face had frozen they way she was turning up her nose at the menu, she’s be one unhappy camper.  In all honesty, Andrew and I were pretty nervous–we’d taken everyone here thinking it was akin to a Benihana, but it turned out to be about 95% sushi and sans-hibachi tables.  Our table ended up with five chicken teriyakis, one beef teriyaki, one soba noodle and one edamame order with an Alaska roll.  Can you tell which one was mine??

The night wasn’t a total loss; we ended up in a room of our own and had a few good laughs, and everyone got to experience a few things out of their comfort zone 🙂

Happy Easter morning!  I got up early to cook breakfast 🙂

I made the Clinton Street Baking Co.’s buttermilk waffles (thanks for the book, Susy!), maple-roasted bacon and fruit.  I even made the maple butter from the cookbook and it. was. divine.  Even Andrew loved it.

As always, we did Easter baskets.  Andrew’s is full of junk food and candy.  I threw in a Bananagrams game, thinking it would be a good 2-person game for the house.

Andrew (as usual), went way overboard with my basket this year:

He collected all sorts of my favorite gourmet/health foods, like sweet potato chips, Luna bars, flavored seltzer, Starburst Jellybeans, Ritter chocolate with Marzipan (Heather introduced me to it before we moved last year)… 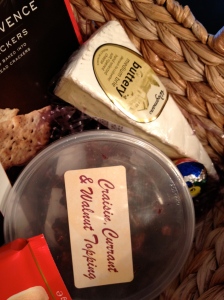 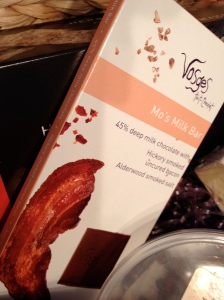 …I’ve been DYING to try this chocolate bar since I saw it in a Food Network magazine like two years ago!

Dave sent me home with some Cadbury creme eggs last weekend, and I broke into it Easter morning!  (I was good; I only ate half, though.)

Andrew particularly liked his tangerine-flavored Jelly Belly carrot.  I had to force him to eat one before church…  Seriously, who has to be forced to eat ONE jelly bean EVER?  I wasn’t going to eat a bunch of candy all alone!

After church (we accompanied the Layers), we rushed home to finish our contributions to the meal and walk the dog before heading back to their house. 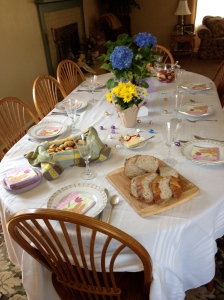 Butter ‘lambs; are a big deal around here.  I saw them at the grocery store a week or so ago and wondered where they’d been all the other Easters of my life.  Not where I lived, apparently. 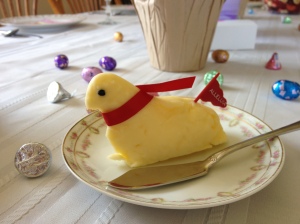 I made caramelized pear, sage and orange biscuit bites, a recipe I found in a cookbook of Susy’s last time I was at her house. They were pretty darn good, but I don’t know if I’d make them again. 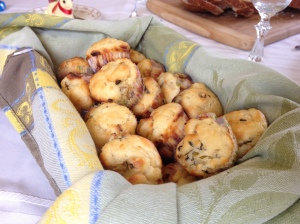 I also made Pioneer Woman’s Tres Leches cake for dessert.  I. CAN’T. STOP. EATING. IT.  Seriously.  I had two pieces yesterday and two pieces (so far) today.  Not good.

We spent the rest of the afternoon hanging out before Abigail had to head back to school.  I studied for my Micro test (I have THREE tests and a quiz this week…say a prayer for me, people!).

The rest of the family played ‘bean farmer,’ which I believe is really called Bonanza.

Carolyn opted out and instead searched for dishes on the iPad.

After a light dinner of sandwiches and leftovers–not that anyone was terribly hungry–Andrew and I headed home to rescue the puppy and prep for the week ahead…if only I’d had another day off!

I’ll be up for air sometime on Thursday!