A few weeks ago, I spent an afternoon with one of Andrew’s best friend’s mom, Mrs. Nye.  Her son, Alex, and Andrew went to school here in East Aurora together and played on the basketball team.  They’re a bit of an unlikely pair (Alex is a bit more fly-by-the-seat-of-his-pants and works in the broadcast news business; he’s creative and perhaps a little rough around the edges) but they totally work and both have a strong entrepreneurial spirit.

Anyway, his mom, Ann, is famous around here for her pies–she even had a small home business going for awhile–and pie is one thing that makes me nervous (I’m always afraid I’m going to mess up the crust), so I enlisted her help.

She was prepped and ready to go before I even arrived; she even has a handy pie-rolling station/cutting board built right into her countertop.

My mistake #1: I never use enough flour for the board.  Don’t be stingy, Holly!

We started with flour, salt and shortening in the mixer until it resembled a pea-like consistency, then started adding water.  Mrs. Nye doesn’t bother with the ‘it must be ice-cold’ business! 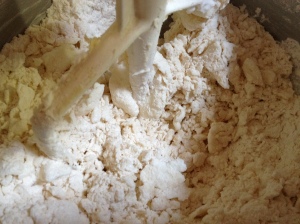 Then, just when it was starting to hold together, we formed it into balls/discs by hand.  Again, lots of flour!

Now, here’s the tricky part: getting the crust INTO the pan…  It’s always the part that makes me sweat.  I’ve always relied on the ‘drape it over the rolling pin and hope for the best’ method.  Mrs. Nye doesn’t sweat it at all; she just rolls it out and before you know it, it’s on the pie plate and she doesn’t care how it looks–it’s on the bottom, anyway.  (I knew there would be some nuggets of wisdom in here…) 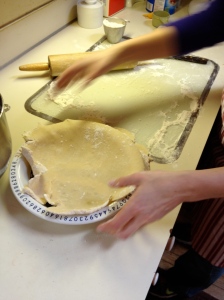 Crimp the edges however you like–this one was for a one-shell pie–and then grab a fork.

For pre-baking a pie shell, make little punctures ALL OVER THE PIE with a fork.  Another thing Mrs. Nye doesn’t mess with is pie weights (she’s a bit of a minimalist). 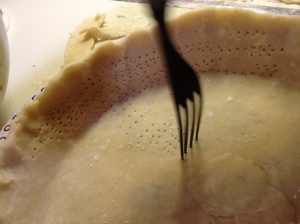 There’s my pie!  This one was a maple syrup pie–Andrew and I are huge fans of the one we had at Aux Anciens Canadiens in Quebec City a couple years ago–and I found a recipe in the pie “bible” at Susy’s house.  More on the recipe later. 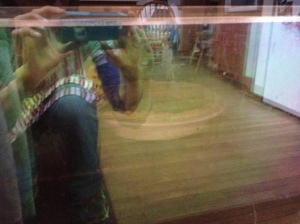 Mrs. Nye was preparing apples for the rest of our pies, which we would assemble and freeze.  Who knew you could do that?

(My tried-and-true apple pie recipe is from a friend of mine’s mom, which is really just a basic recipe, and then I add LOTS of cinnamon–a tablespoon–and orange juice and orange zest.  I saw the citrus addition on a Barefoot Contessa episode and took it to be God’s truth, and it is.  The cinnamon is all me.) 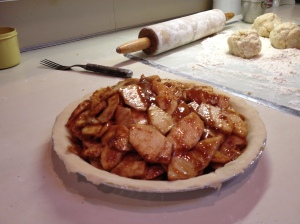 …and now, the second crust!  Here is where I start to get REALLY nervous.  I mean, this is the one that people actually SEE, and it has to fit over the top.

Use water to ‘glue’ the edges before draping with the second crust.  (Again, who knew??  No one ever told me this.) 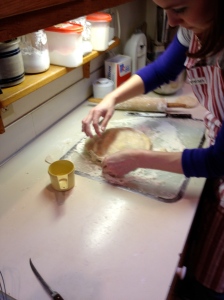 Finish by tearing any extra crust off the long parts and use them to patch other areas, if necessary.  For Mrs. Nye, who can actually roll her crust into a relative circle, this is probably an UNnecessary step.  For me, it’s the only way my crust actually stretches from side to side…

Life goal #4: not get fat in the process

Anyway, about the recipe.  So Andrew and I just DIED over this maple syrup pie we had on a trip to Quebec City awhile back (the fact that it cost an arm and a leg and we WENT BACK A SECOND TIME should tell you something), and I’ve tried a couple times to make one at home.  Imagine, if you will, a pecan pie without the pecans, but still a crunchy ‘crust-like’ top layer.  That, my friends, is a maple syrup pie.

Sadly, the recipe we used from the pie “bible” (below) wasn’t quite it.

This recipe is a little closer–I made it for our Bible study shortly after returning home from our trip–but wasn’t exactly right, either.  Guess we’ll just have to go back and try it again!!  Actually, we’ve been trying to arrange a trip with Emily and Dan up there during the winter, so maybe next year??

Below is me with the baked maple syrup pie.  Man, did it smell good! I had to scoot out after it finished, we I took it home to surprise Andrew, and then we showed up at the Nye’s with the rest of the pie to share with them.

The reason this post has taken me SO LONG is that I wanted to wait until I actually baked the apple pie from my freezer (that, and life just has a way of side-tracking me lately…)  Well, with only two of us, it’s not all that practical to just throw a pie in the over with no one to help us eat it!

Last night was the perfect excuse–Andrew’s grandma came for a visit for Easter–so I packed it up and brought it over to the Layer’s to have after pizza and wings.

Sadly, I forgot to take a photo of the baked pie…by the time I remembered, it was almost gone!  The crust looked pretty nice–one of my best, perhaps–I can tell you that.

And since I can’t have pie without ice cream or whipped cream (the maple syrup pie is best with freshly whipped, slightly sweetened whipped cream to cut the sweetness), I asked Andrew’s mom to make sure some was in the freezer.  I also brought the salted caramel sauce (Did you know it’s most definitely pronounced “car-A-mel,” not “car-mel?”  I heard that on the radio the other day.) Susy sent home with me and it was fantastic.

One thought on “mrs. nye’s pies”