…NOT studying, I can tell you that.

Well, first I blogged at 4:30 in the morning, because that’s when the dog got me up.

And then I swam, followed by a marathon-shopping trip to Wegmans for a few essentials (we were almost out of milk already!) and goodies for Andrew’s Easter basket.  I got myself a coffee and put my feet up at one of their cafe tables to chat on the phone before I even ventured into produce.  Can you tell I’m on a break from school?

Well, as the clock neared 11 (I arrived just after 9 a.m.) I realized I’d better go going or I’d never get anything done.  I raced home to whip up Steakhouse Side Macaroni and Cheese, a recipe that caught my eye in last month’s Cooking Light.

It’s just what the name says; it incorporates all the famous sides from a steakhouse (creamed spinach, sauteed mushrooms and an iceberg wedge with bacon and blue cheese) into one dish.  It was good, but not fantastic.  It was almost a little weird–if you’ve craving that traditional, orange-cheesey mac, this is NOT IT.  But it was yummy and fun to put together.  And (relatively) healthy.

And THEN I baked.  And baked.

My desire to “send Abigail and Grandma home with some goodies” after the Easter weekend has turned into making goodie bags for all my nearest and dearest here. 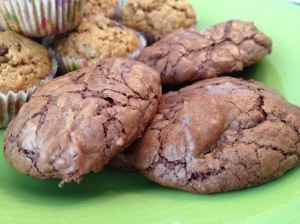 Susy just gave me the Clinton St. Baking Company cookbook, so I tried their ‘brookie’ recipe.  Easy and so good.  I mean, what’s better than a cookie and a brownie mixed together?  I’d also pulled out a recipe for some sort of mocha muffin awhile ago, making a mental note at the time to make them for Abigail when she was home from school, so I whipped up some mini-muffins to spread the wealth. 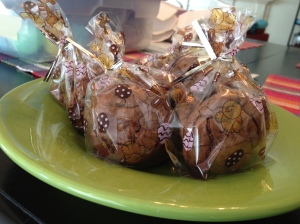 I even went all out and got Easter baggies and treat boxes.  If only I could spend ALL my time doing stuff like this…  I have a few more things to make this weekend before I’m finished: almond butter bars (recipe will be added here soon) for the goodie boxes, as well as some savory muffins and Pioneer Woman’s Tres Leches cake for Easter Sunday.  Some lucky ducks are going to get some sweet surprises this weekend!

And then I did the dishes. 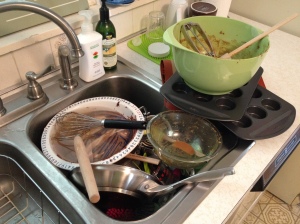 After fitting in some co-op work, a dog walk and–eventually–some studying for my Micro test, I headed back into the kitchen to make dinner.  At 8 p.m.  Because that’s when Andrew came home.  Good grief.

I didn’t take a photo, but I made Pioneer Woman’s Sloppy Joe’s (I’m on a never-ending hunt for the best recipe from scratch) to see if they were better than our current favorite, Cooking Light’s version.  They weren’t, but they were still very good.  Very similar.  Amazingly, Andrew professed a love for CL’s recipe, which is just fine with me, since it’s probably healthier.

Andrew’s off tomorrow, so I’m planning a workout, then brunch, then more baking/studying before meeting a friend for a mid-afternoon “snack/lunch” at Danny’s, a local favorite.  Then, it’s pizza and wings and HOMEMADE APPLE PIE (it’s been in my freezer just waiting for the perfect occasion) at the Layer’s house with Abigail and Grandma 🙂

One thought on “how I spent my Thursday”