I’m not Irish.  Nor do I really “dress up” for holidays.  (Well, I’d love nothing more than uber-festive Thanksgiving and Christmas dinners, but not everyone is up for that in my families.  Sigh.)

We’re having phenomenally good weather here this week (which is a boon for the parades and things), and so to take full advantage of it, I decided to run outside.  In green.  You see, for the last few (maybe four or five?), I’ve been running a 10K on, or in honor of, St. Patrick’s Day in head-to-toe green.  Wright-Patt ABF always had their St. Patrick’s Day run (and I was a sucker for those lunchtime base runs), and even after separating from the military, Susy and I still participated  in them until I moved last year.

Well, it’s just more than a 10K (6.3 miles, to be exact) from our driveway in Orchard Park to Andrew’s parents’ driveway in East Aurora.  So, I ran there.  I packed up a gym bag, my phone and purse and sent them all with Andrew so I could shower after at his parents’ house.  It actually worked out perfectly; Andrew often goes into work for a few hours Saturday morning and then we like to meet up in EA for lunch/coffee/walking around/errands/hanging at his parents’ house, so this eliminated the second car I would have driven to get there.  SCORE!

Which brings me to the POINT of this entire post: the green.

Sadly, despite thinking about snapping a photo during my run, I failed to actually take a photo of me in my running get-up and didn’t remember until I was half-naked and jumping in the shower. Sad.

Just imagine neon-green Nike running shorts, a light-green 3/4 length shirt with a light-pink “Speed Demon” printed on the front, paired with my hot pink “Suck it up, Cupcake” sweatband and sunglasses (thanks mom!).  That shirt was perhaps the best Goodwill find yet.  You get the picture.

With the nice weather, I busted out my favorite shoes on the planet: 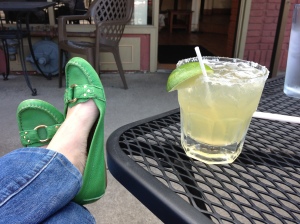 We went to Arriba for lunch for outdoor seating and enjoyed Margaritas and tacos.  I had wanted something light, (I would have been fine with a banana and yogurt) but Andrew doesn’t often request Mexican, so I wasn’t about to turn him down.  And, in fact, we both ordered the single tacos, which I feared might not be enough, but it was plenty!  I took half my grilled chicken taco home (essentially a taco salad on a burrito shell, minus the cheese), along with half the sides I ordered (corn pudding, because it’s AMAZING, and black beans).  Score one for healthy options at what could have been a calorie-bomb AND portion control!  I even went easy on the chips and salsa 🙂

Not to mention, Andrew ordered the carnitas taco, which is a seasoned pork taco filled with a pineapple salsa and cilantro cabbage slaw… Holy Smokes!  He inhaled it.  Let’s just say he’s counting the days until he can go back.

Afterward we walked about the village, popping into stores here and there.  I needed more honey, so I got a bottle of the local stuff at the co-op’s mini-Market.  We picked up a bottle of Rose at Salut, the new wine store, and I indulged in an ice cream cone from Fowler’s.  (Hey, at least we walked a TON.)

We came home and promptly became bumps on logs and continued watching season 1 of Big Bang Theory, borrowed from Carolyn.

We did, however, manage to take a walk to Vincenzo’s, the local Italian Ice place in the Orchard Park village, for a post-dinner treat.  They even welcome dogs INSIDE and have treats for them, too! 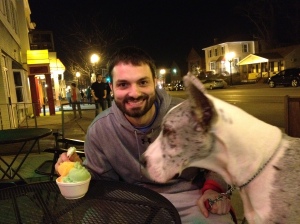 Check out my running outfit for Sunday morning: same shorts, different shirt.  I mean, if one actually HAS neon green running shorts, you gotta take full advantage of them this time of year!  (That, and the amazing weather!)

After church and lunch with friends, we headed all headed to the parade downtown.

We definitely saw some interesting things…  Mohawks, various combinations of green and festive hats, sunglasses, tights….  You name, we saw it. 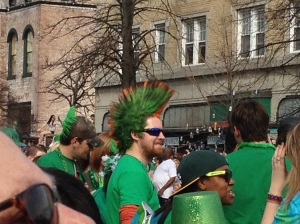 There really weren’t all that many “floats.”

At least we got a nice shot of us 🙂 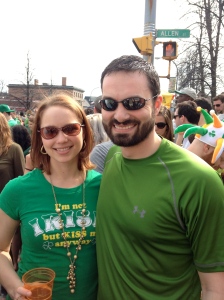 3 thoughts on “it was a green kind of weekend”