Get ready to salivate.

Seriously.  My stomach is in so much pain from the amount of caramel I consumed this afternoon, yet I don’t regret a single taste of it.  Or forty.

We used Susy’s friend’s grandmother’s recipe for caramels.  Barefoot Contessa also has a recipe, so I’ll have to try that one next.  (I have this thing with finding the “best” recipe for any given thing…  I once made SIX different blueberry muffin recipes one Saturday morning just to figure out which was the best.  Results in a nutshell: the recipe I’d been making for the last few years came in dead last, Martha’s came in first [of course her’s would].  Andrew did document that morning in pictures, so perhaps one of these days I’ll share them with you all!)

Anyway, back to the caramels. 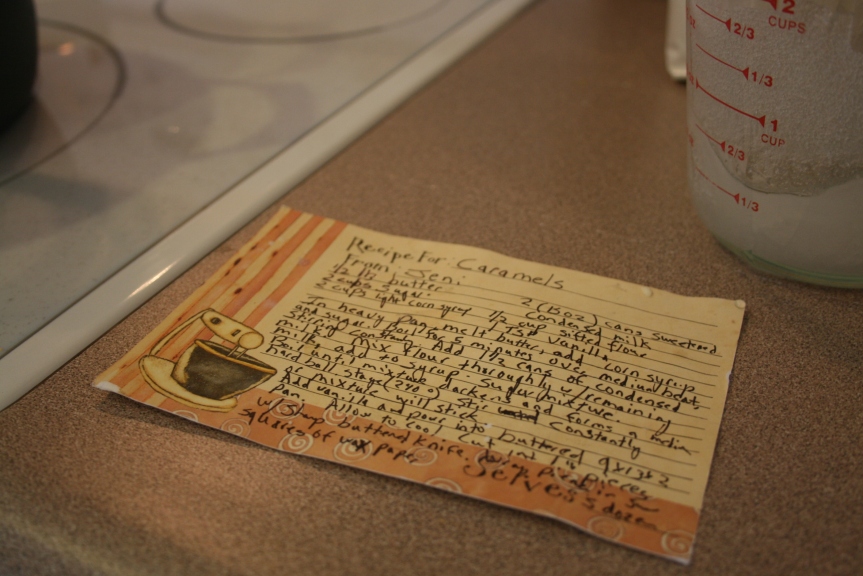 Anna, Susy’s daughter, helped the whole time.  Here she is getting every last drop of the corn syrup into the measuring cup.

Let the corn syrup, butter and sugar boil for five minutes.  And use a wooden spoon.  Apparently it’s a requirement.

Here is Susy in her natural state: caffeinated and offering to make her guests an espresso or latte.  She loves her espresso machine more than life itself.

Susy and Jennifer have been friends for years.  Susy introduced me to Jennifer at Bible study awhile ago and I love her!  I love her short hair (finally, someone who understands what “short” really is) and her Southern accent.  And her faith in God–such an amazing woman!  And, she was our photographer this afternoon, which is nice for me, since I’m not naturally inclined to take photos, yet I love having them and being in them.  Note to self:  learn to use the timer on Andrew’s camera for times I DON’T have Jennifer around.

We added two cans of sweetened, condensed milk.  You actually add 1.5 cans and use the remaining half to mix (really well!) with 1/2 cup sifted flour, then add that, too.  And vanilla.  I love the smell of real vanilla extract.

Candy thermometers are a must here.  Hmm, I LOVE my candy thermometer at home, yet I’ve never actually used it to make candy…  Homemade yogurt, water temperature before making bread–now that we’re moving and Andrew won’t be getting any of Susy’s caramels every time she makes them, guess I need to add making caramels to the list of things I use my candy thermometer for.

Apparently, you test “done-ness” by spooning a tiny bit into a glass of ice water and tasting it.  It should be “hard ball,” or relatively solid.  We must have tested it five times before it was ready…

It started getting darker, which told us it was getting close. 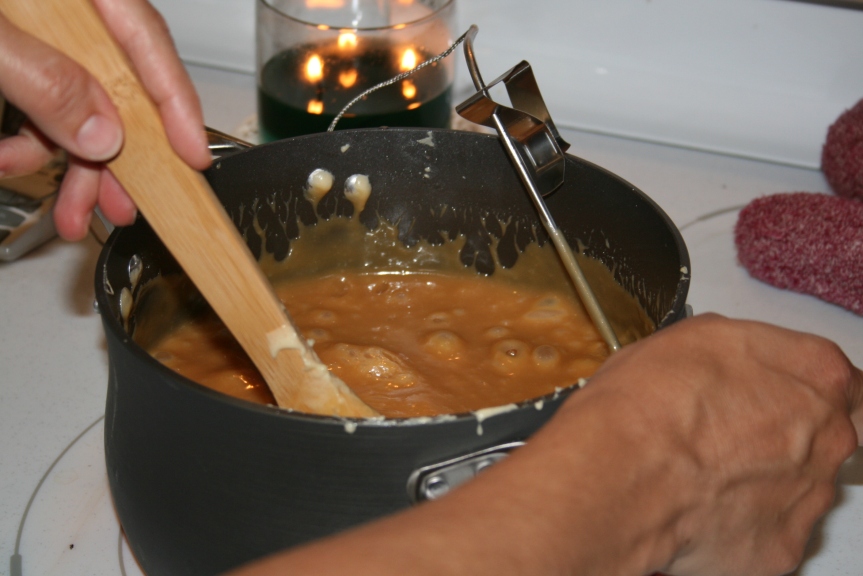 Once it passed the consistency test, we poured it into an oiled dish to cool. 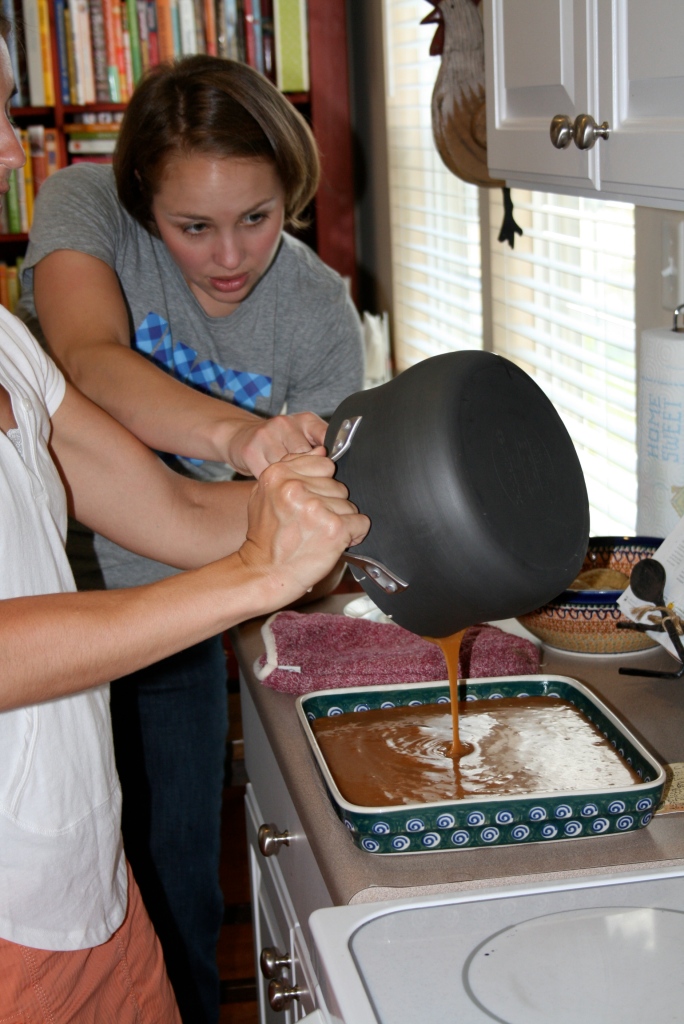 Sprinkled on some sea salt.  If I had my way (and probably Susy, too), I’d roll each piece in some coarse sea salt as well.  YUM. 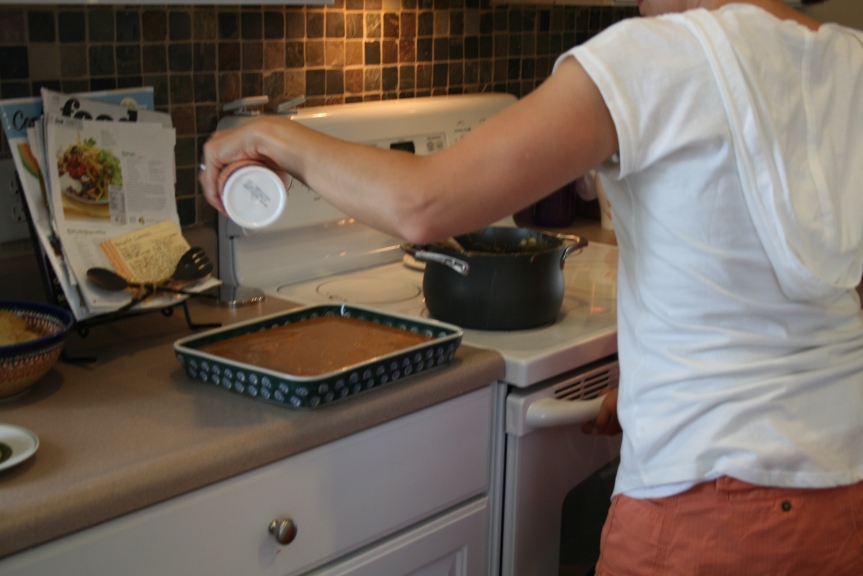 We threw the pan in the fridge to speed up the hardening process, then left to do some Goodwill shopping.  I scored some BRAND NEW Ann Taylor camis and a pair of dressy, black, knee-length shorts.  I’m still on Cloud 9 about trying on size 6’s and 8’s.  Never. Been. Happier.

Susy scored the top before it hardened any more, then we popped it back in the fridge.

We finally cut into it and started wrapping.  In all honesty, it probably could have stayed in the fridge a bit longer to harder, but we had to get the show on the road! 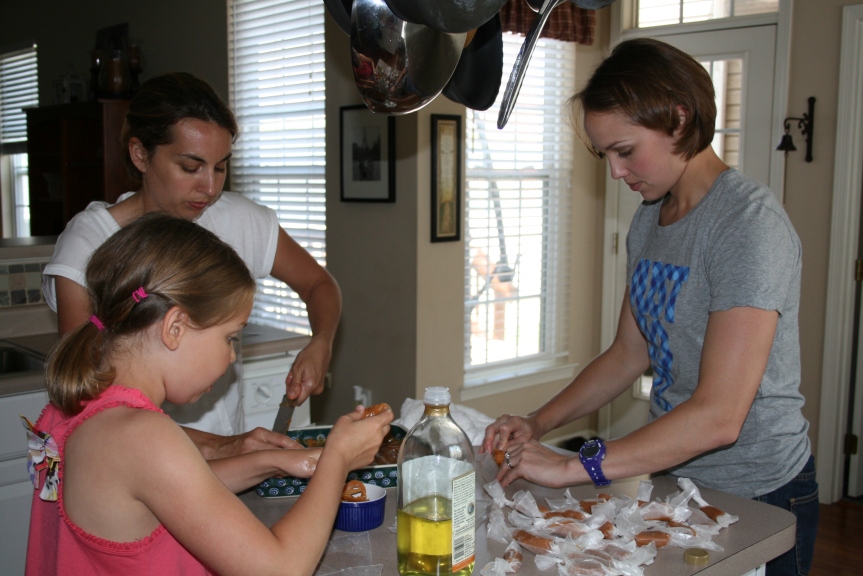 Picture the stickiest, messiest, greasiest (we oiled our hands to keep them from sticking) scene possible.  Then double it. 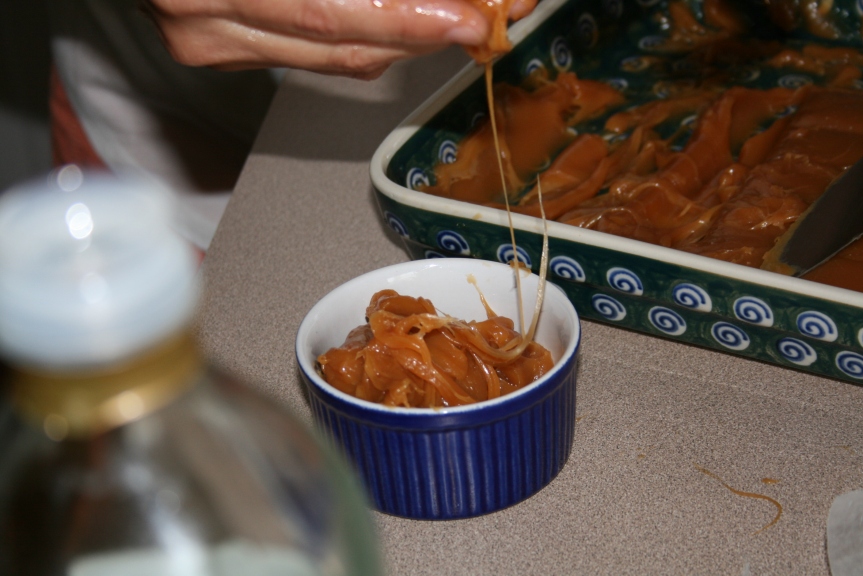 Finished, wrapped caramels!  Andrew will be in heaven when he gets home.  Did you know he told me, explicitly, that he WOULD NOT allow me to move to NY until I’d gone to Susy’s and learned how to make caramels?  Well, he did.  Glad I got that box checked off! 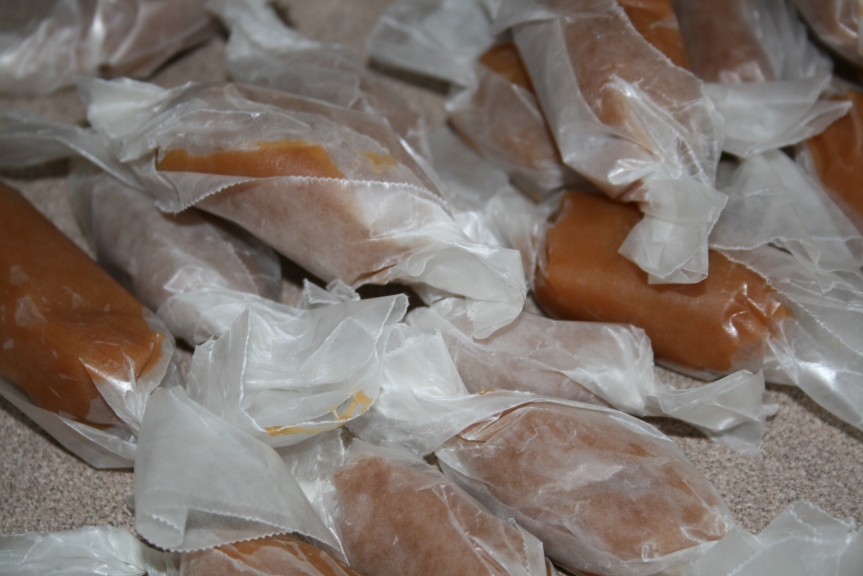 Anna made up banana muffins for lunch.  Great photo!

I LOVE Susy’s napkin holder.  Does anyone know where I can get one?  I’ve been on the lookout for awhile now for a colorful, slightly funky yet simple/traditional napkin holder.  And a banana hanger while I’m at it.  I have a bamboo one and it’s just so BORING.  I am not boring. 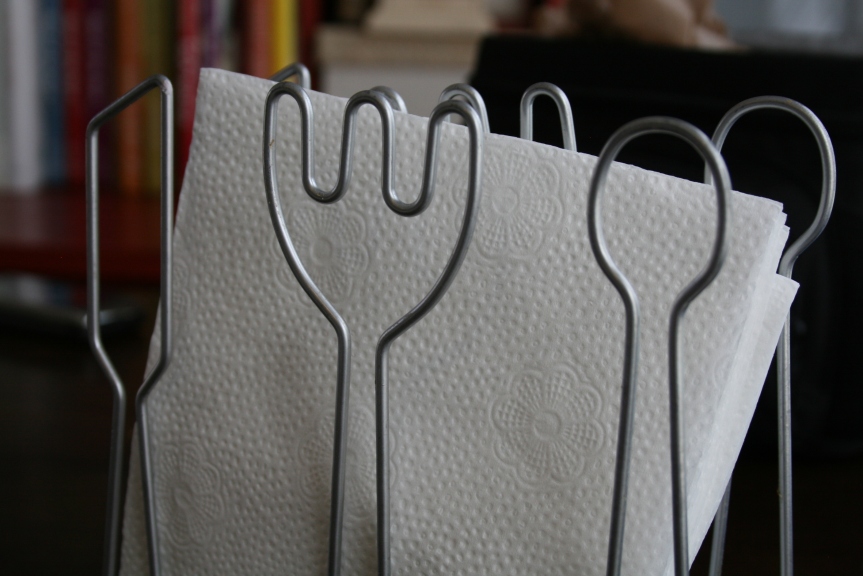 And then, because we could, we made salted caramel sauce. 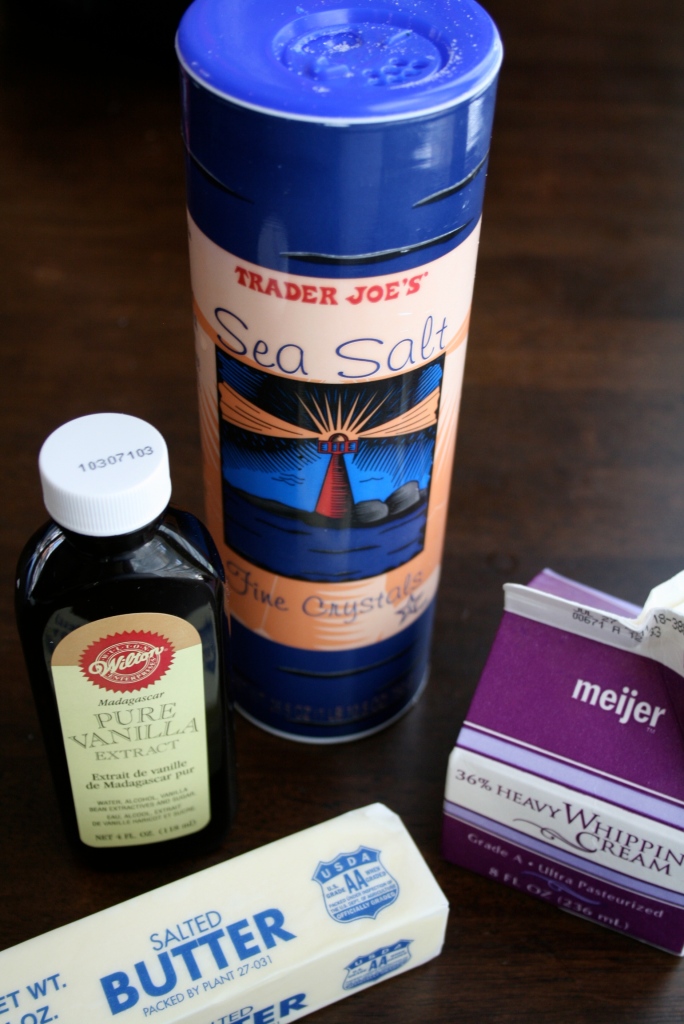 You start with a saucepot and sugar.  Turn the heat on.

The sugar will start to melt into what look like clumps.  Stir a little, but not too much!  (Susy said not to.) 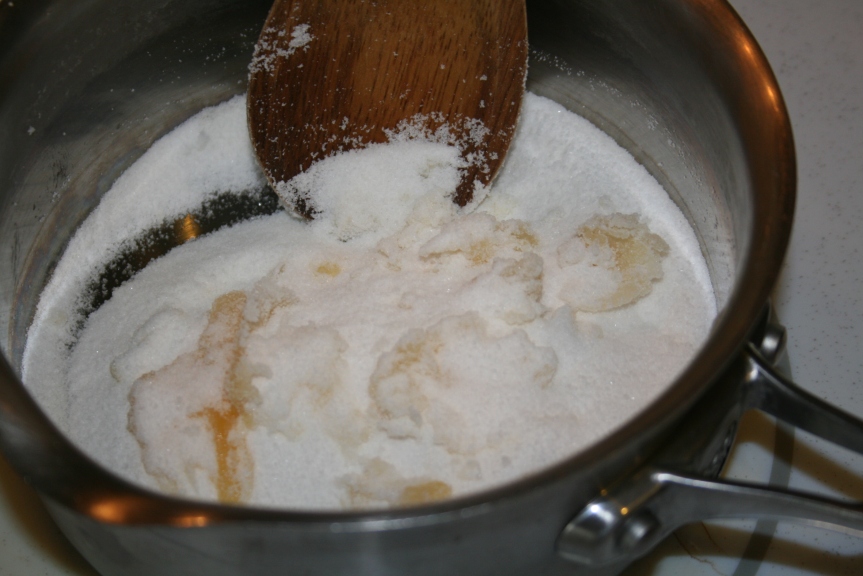 Always time for a photo!

Add the butter.  It will bubble and sizzle a bit.

Then add the vanilla, cream and a teaspoon or so of salt.

Finished sauce!  Yum.  I drizzled some on an apple to start, but by the end of the afternoon, we were basically eating it with a spoon.  I’m willing myself not to pour the sauce I took home on ice cream tonight…I was in a sugar-stupor all afternoon!

I recovered with a bowl of Ellie Krieger’s Nutty Sweet Potato soup with scallions and peanuts.  Healthy!  Tonight I plan on packing up all our pantry food and most of my clothes.  Wish me luck!

3 thoughts on “it was a caramel-making kind of day”