The other day, I saw some of the most beautiful veggies at the co-op: bright yellow cauliflower and vivid green romanesco.  I grabbed one of each, along with some red bell peppers and a red onion, with the intention of roasting them all together. END_OF_DOCUMENT_TOKEN_TO_BE_REPLACED

I’ll admit, I was a little wary serving something with cauliflower in it…  The last time I did, Andrew and I got into a screaming match over whether I HAD or HAD NOT made vegetable korma (with cauliflower) knowing he’d hate it.  (Truth:  I never make anything I know he’ll abhor.  I do, however, make things that include ingredients he doesn’t care for.  In all honesty, I didn’t like the vegetable korma, either.)

I (finally!) made kale chips.  Andrew LOVED them.  LOVED.  I have to admit, I didn’t.  I think it was a texture thing.  They got so crisp that they kind of disintegrated as you bit into them, which I didn’t like.  If that isn’t the texture I’m going for, someone let me know!

(BTW, I’m whipping this up at 5 a.m. before I head the gym…Hadrian decided it was time to get up at 4 a.m. and after making Andrew take him out–hey, he had three more hours to sleep compared to my ONE–I decided to cut my losses and just get up.  That, and Odie was making too much noise licking plastic…)

I reheated the second loaf of sourdough in the over.  No, we didn’t go through a whole one last night, but after lunches today, there wasn’t much left!  I made the BEST muenster and mushroom grilled sandwich yesterday for lunch 🙂 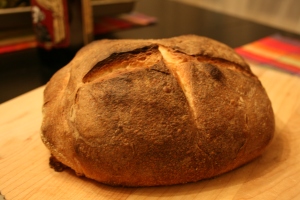 And…the grand finale:  Baked Italian-Style Cauliflower, found in Cooking Light this month.  I’m telling you, it was fate.  I needed a recipe with beef, so I looked that up in the index (isn’t it neat magazines have indexes?) and wouldn’t you know, I just happened to have leftover cauliflower on hand, too.  I find there are some dishes I make that require some ‘advance planning’ to use up all the ingredients, mostly with cabbage.  I mean, just one cabbage produces SO MUCH (often I only need half or a quarter of one) and usually I need one of each COLOR, so when I meal-plan now, I think ahead and pick meals that I can re-use leftovers.  So, when I make coleslaw, I often make this one dish of slightly sweet/hot sauteed red cabbage to serve with pork.

Anyway, back to dinner.  I loved it!  And Andrew thought it was pretty good, too.  I have to admit, I’m not sure I’m going to save the recipe; the binder is reserved for AWESOME meals only (I just have too many to try to keep ALL of the decent ones–and post on recipe binders coming soon!) but it’s not hard to remember this.  Basically, steam some cauliflower, top with spaghetti sauce cooked with a little bit of beef, onion and garlic (it was supposed to have olives, but I left those out until the end and added them to my half, as well as mushrooms I had on hand, too), then top with breadcrumbs and cheese. Broil four minutes.  I thought it was incredibly flavorful and an awesome (and healthy!) way to eat cauliflower.  It made four servings; 300 calories each.  (Can you see I only put cheese on MY half??  I’m such a nice wife.) 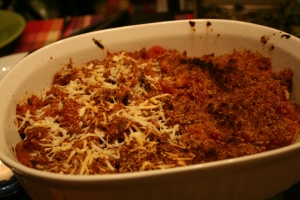 I opened a Shiraz from my last trip to Trader Joe’s.  This was the perfect meal for red.

And this is the olive oil Andrew has fallen head over heels for.  I chose it last time I was at Wegmans because it’s nice but not ‘break the bank’ nice.  And I know Ina used olive oil made from California olives, so I thought I’d give it a whirl.  Andrew noticed right away as he uses it to dip with herbs for bread, which made me happy.  Score one for me!  (He says he’s a “supertaster,” which does exist–we learned about it in psych of all classes–but I don’t agree.  While he does have a knack for guessing particular flavors, supertasters often find things like broccoli too bitter, which he doesn’t.  I think he’s just picky.)

Our pretty table 🙂  However, all this table-photographing makes me feel like Semi-Homemade with Sandra Lee and her ‘tablescapes.’  Ahh, gag me with a spoon.  I hate that show…

I even went all-out and lit some tea lights.  Note to self: dust next time! 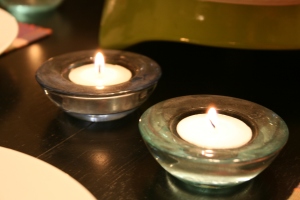 Here’s the recipe–it was under “Budget Cooking,” which I think is a great idea for a monthly magazine.  Only $2.50 per serving.  See, you can eat healthily, use REAL food and not break the bank.  I’m sure if you search Cooking Light for the recipe you’ll find it–I’m pressed for time so I need to wrap this up!  BTW, Cooking Light is doing a year-long series (that just started this month) on the ‘Best 100 Cookbooks’ for their 15th (or is it 25th?) anniversary.  I like the magazine enough, anyway (I grabbed this month’s after seeing their ginger pumpkin pie on the cover), so I subscribed…  I LOVE cookbooks and I knew I wouldn’t remember to buy it off the newsstand–not to mention it’s $5 a pop!–so I got it for $1 each instead.  🙂  I didn’t want to miss their cookbook reviews! 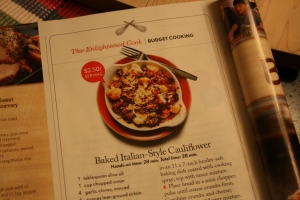 And the kale chips–Kath makes them all the time, and Susy is a big fan, too, so I had to give them a try.  Susy gave me Tyler Florence’s Family Meal cookbook (below) and I treasure it.  Every time I look at it I think of her.  Miss you! 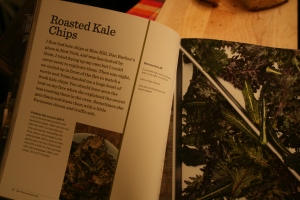 I gave up calorie-counting for Memorial Day weekend.  It really just wasn’t going to be practical to be jumping on-and-off the computer all day with everything going on.  Not to mention all the yummy goodies everywhere!  Cinnamon rolls and mimosas at Heather’s promotion!  Rita’s gelati TWICE!  Birthday cake, outrageous brownies, lemon bars, mojitos, sangria…and that was just FRIDAY.  Raspberry angel food cake with raspberry buttercream icing awaited me in Carmel.

I went into the weekend knowing I’d be faced with temptation at every turn.  I did my best, most of the time, to make good choices yet still enjoy myself and the food.  I am a foodie, after all.

Well, you win some, you lose some.  According to the scale, I didn’t do too much damage, but I didn’t lose any, either.  So, basically, I’ve been at the same weight for a couple weeks now, which is fine, don’t get me wrong.  But I’m supposed to be LOSING two pounds a week…  I’m fine until I think about how much I COULD have lost if I’d just been stricter.  And then I remember how good the cake tasted.

Thankfully, all has returned to (relative) normalcy around here, so I’m back on the calorie-counting band wagon.  Yippee!  After four days off, I realized I actually feel better when I’m counting.  Maybe it’s a control-thing, maybe it’s just my personality, maybe it’s because I’m typically eating healthier food, maybe it’s a combination of all three, but I really do enjoy it.  I know it stresses a lot of people out.  Or they think it’s too complicated or time-consuming.  But I love it.  I just wish I had an iPhone so I could do it when I’m on the go, too…

Between eating more produce and cleaning out my fridge, I’ve come up with some great meals since last night.  Dinner last night was roasted broccoli and cauliflower (leftover from the party), hummus and tomatoes and fruit.  Breakfast this morning was a banana, followed by a post-workout yogurt, mango and granola parfait.  Here’s what I had tonight:

Roasted cauliflower (olive oil, cumin and paprika), a Wasa Fiber cracker spread with a Laughing Cow cheese wedge and four dried figs.  Yum.  I spooned up a mixture of mango and watermelon as well, but I may save that for dessert–I got full!

I really do feel better when I’m eating smaller meals (like 200 calories) every 2-3 hours.  I’m a fan of cottage cheese with pineapple, or an apple and peanut butter or cheese and crackers.

Off to get some more exercise: disassembling Hadrian’s crate, lugging it upstairs and into the car, followed by a walk (for him) because the weather is so nice!