Yet again, I’m terribly behind on posting this update, just like last time.  Everyone told me pregnancy would fly by, and they’re certainly right.  I can’t believe how quickly the time has passed, and how few weeks we have left to go (only about six)!

I can’t believe how much pregnancy has slowed me down (in more ways than one) and allowed me to let things go.  Perhaps because I can’t physically do as much, it’s easier for me to accept a more ‘laissez-faire’ approach to things like house projects, my schedule and even my day-to-day to-do items.  While I haven’t ben a couch potato, I’ve definitely had to take more breaks, make changes to the routine and give myself grace when I don’t meet my own expectations.

Praise God!  Veggies are back on a more regular rotation.  This meal from early January, pictured above, might have been the healthiest thing I’d eaten since late October.  While my diet isn’t as ‘clean’ as it has been in the past, I’m at least able to eat more nutritious and balanced meals. I continue to be surprised as how pregnancy has affected my diet.  I allow myself way more sweet treats than I normally would, and I still like lime popsicles.  I can’t say I experience cravings or aversions, but I still don’t want raw vegetables like I used to.  I’m hoping to get back to eating better after baby…although I know that will be a huge challenge!

I continued to teach my cycle class and run during the second trimester, although I’ve stopped running now (more on that later).  Exercise hasn’t been as frequent as pre-pregnancy, maybe only 3-4 times a week, but these days even regular activities feel more strenuous. I try to add a couple 30-minute power walks each week, and we walked all over Sicily on our babymoon.  Exercise is definitely an aspect of pregnancy in which my reality has not met my expectations.  I, perhaps naively, assumed my routine would stay very similar to my routine before, just with modifications.  I’m surprised as how little time I’ve made to exercise, and thankful that my prior level of fitness and relatively active lifestyle are allowing me to remain healthy. 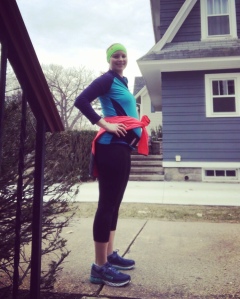 The months of January through April were busy for baby and me!  We visited Abigail and Marvin in Philadelphia for her baby shower, started working on baby’s room (it’s still not done), said goodbye to our furry friend, Hadrian, I visited Emily in Ohio, and traveled to Sicily for our babymoon.  After spending 6+ hours in the drivers’ seat a couple times, I’m thankful I don’t have any more travel planned before baby…it’s just not comfortable anymore!

I really popped out around Week 24!