OK, so this is a *bit* later than I’d like, but things have been especially hectic over here these past two weeks, and it will be about another two weeks until it slows down, but it’s aaaallllllll goooooood, mon.

*Disclaimer:  You will see virtually NO photos of us from the entire weekend.  Yet again, we were ‘photo-challenged’ (as my mom puts it) and failed to take A SINGLE PHOTO TOGETHER.  Seriously.  Where’s Andrew and his camera when you need them?!

My parents visited for the long weekend, which was INCREDIBLE.  My parents are in DC and we’re all pretty busy, so visits are few and far-between; it’s a good year if I see one or both parents more than once.  Having them come here and see how much work we’ve done on the house–especially the backyard–was really neat.  Also, my mom and I have birthdays that weekend just a day apart, (it gets better, too–my grandmother’s birthday is the day after my mom’s) and I grew up celebrating all three of our birthdays together, either at Bamma’s house in Virginia, or at our house in Pennsylvania when we lived there.  It’s been a number of years since we’ve done that, and Andrew and I have been out of the country the past three years over my birthday, so it was really special to be with my parents again.  Check out the beautiful cake my dad picked out for our BBQ Monday: 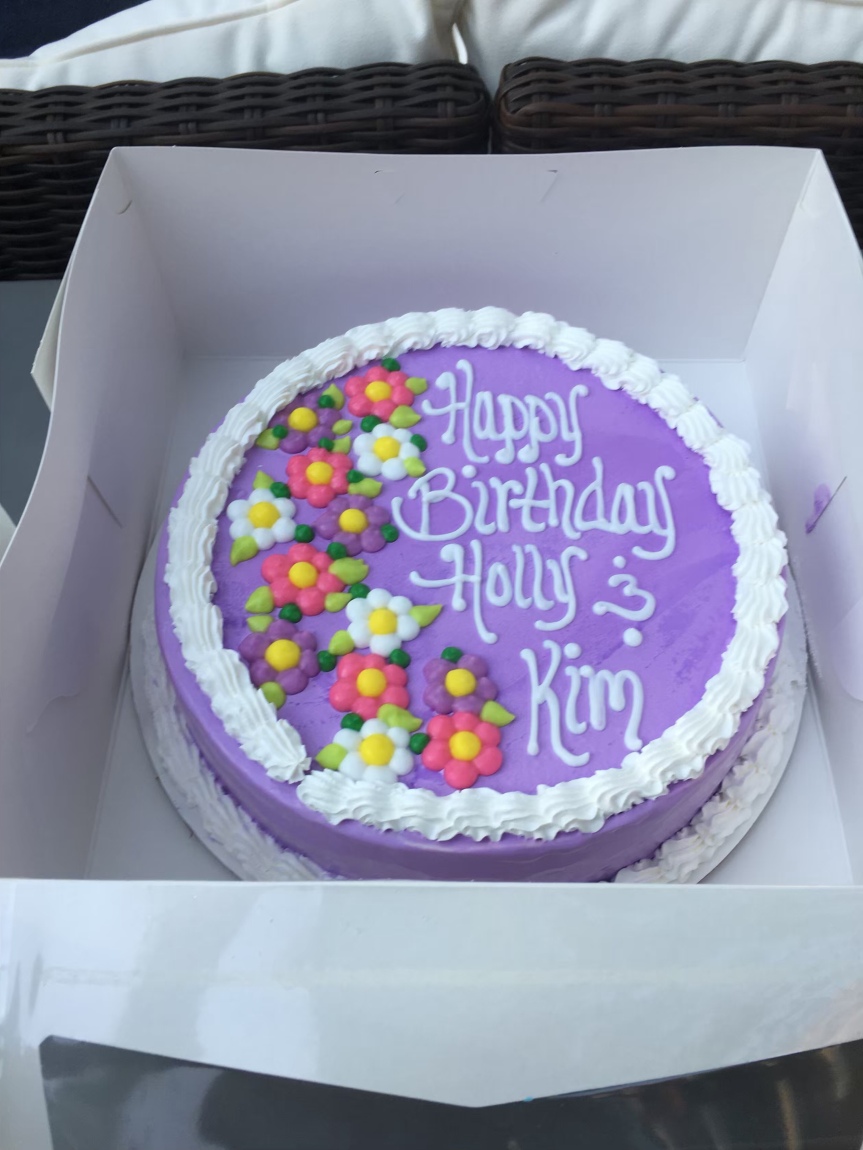 It was an ice cream cake from Kone King here in town and it’s the prettiest cake I’ve ever had!  It was a huge hit with the crowd, and I was in such a good mood I didn’t care one bit that one of the kiddos got it all over one of the couch cushions.  (Praise God for zip-off, washable covers–good as new in no time!)

My long weekend started Thursday, May 24, by staying super late on my last day of work (boo!) to tie up some loose ends, then I met up with my running group for drinks after they finished, and rushed home to vacuum before mom and dad arrived.

Friday morning, Andrew headed into the office for a half-day while mom and dad and I spent a lazy morning at home, followed by a trip to our local nursery and hosta farm.  I LOVE the hosta farm!  I pretty much go every summer, and dread the day that I’ve finished all the landscaping and am no longer in need of hostas.  Thankfully, that’s a ways off, as I have lots of work yet to do! I grabbed a couple hostas and some coral bells, to replace the ones I’ve lost over the years.

After a late lunch at the Bar Bill, we headed home for more yard work.  Dad helped me glue a giant ceramic pot back together that had cracked down the middle (my fault–I left it out with dirt inside all winter) and SUCCESS!  It’s as good as new! Later on, mom and I hit up Lowe’s for some more giant pots and plants with which to fill them, below: 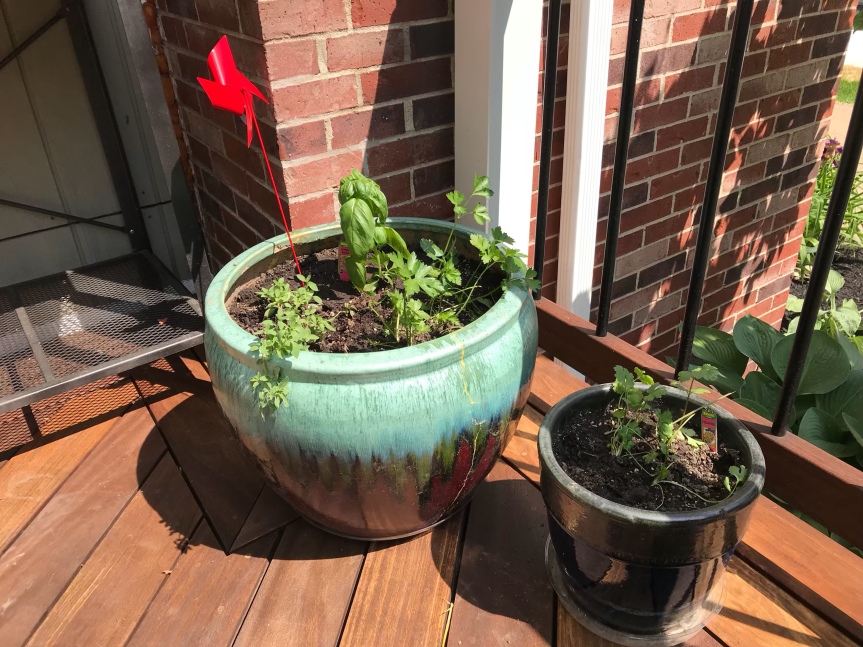 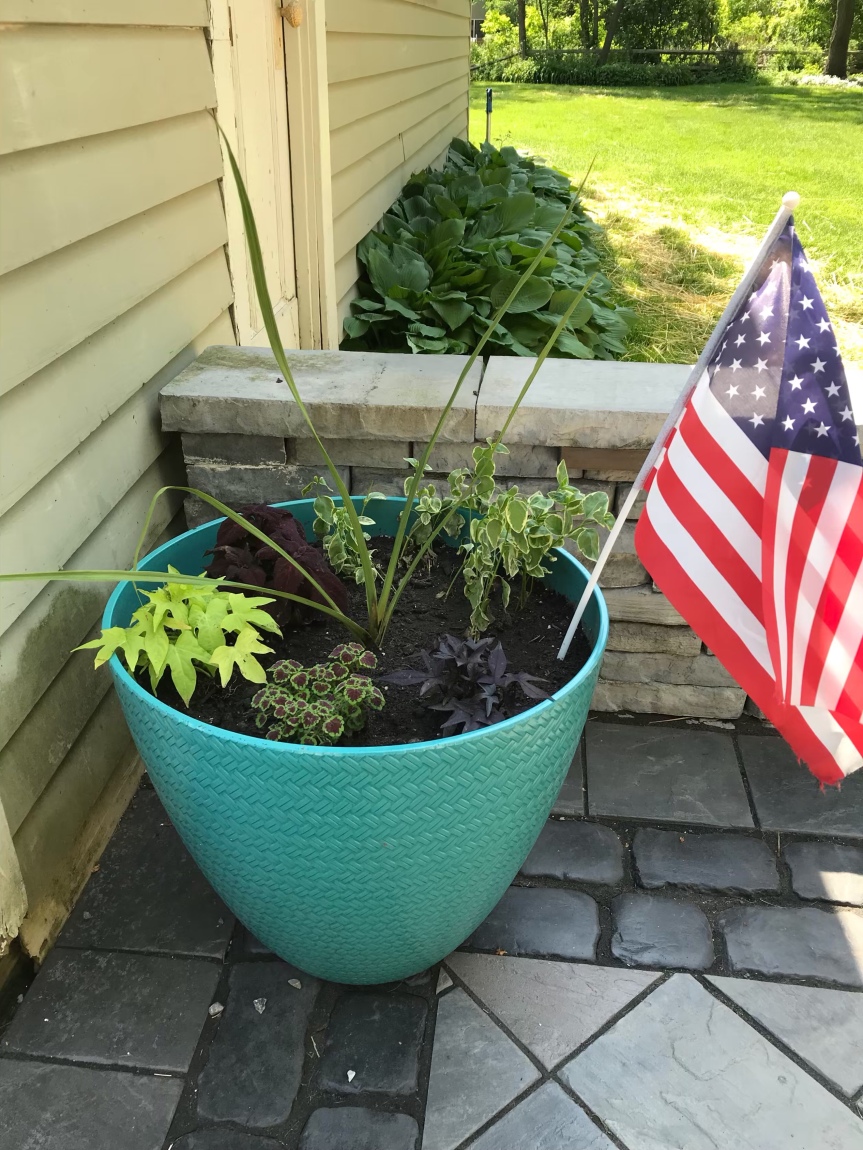 And check out this beautiful FISH pot Andrew got me for my birthday: 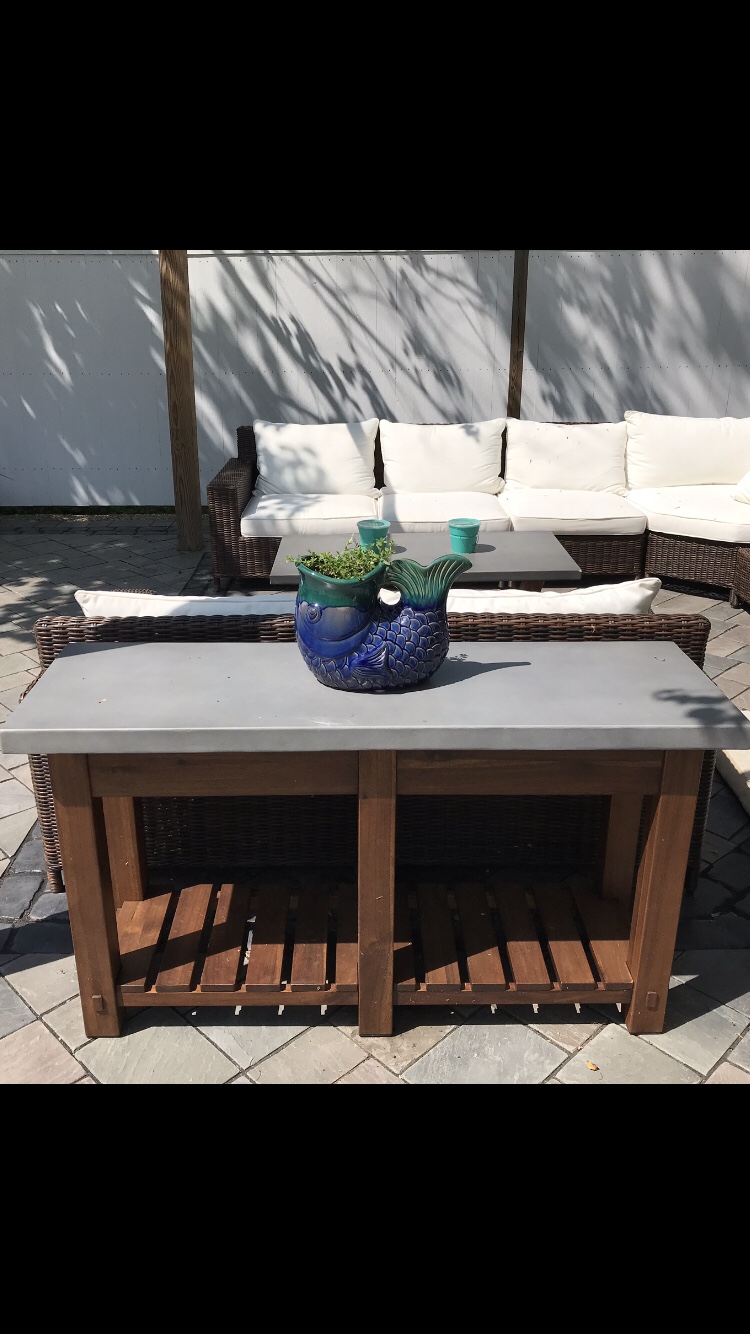 I found it at Murray Brothers’ Nursery and decided it would be *perfect* for the patio, since we’re going with a blue/teal (of course) theme out there.  We’ve since gotten an umbrella for the deck to provide some shade in the afternoon, and picked out the color we’ll order for our sectional cushions (cobalt).

On Sunday, my actual birthday, I FINALLY ran the Buffalo (Half) Marathon!  The race is kind of a big deal around here, and for the last three years we’ve been traveling over Memorial Day weekend.  Last year, I signed up but then we ended up traveling to the Netherlands on a last-minute, work-related trip for Andrew.  I was thankful to be able to transfer my registration to another running friend.

I signed up for the race around Easter, and even though I run all the time, I wouldn’t call what I did ‘training.’  Looking back, I wish I’d done more training, but these past few months have been busy and stressful and I let a few things slide, namely anything more than simple runs to maintain my fitness.  I knew I wasn’t going to PR, but looking back, I probably COULD HAVE with some regular, intentional training runs.  Unfortunately, I also experienced some GI issues during the race, likely related to eating my usual pre-race breakfast (coffee, peanut-butter sandwich) with less than a usual pre-race amount of time (race began at 6:30am!).  While I was fine with my time (1:51 per my Garmin, which I paused during porta-potty stops!), I was disappointed my first Buffalo Half wasn’t very fun or comfortable.  Guess there’s always next year, right?!

The best part was seeing Andrew and my parents cheering for me a couple times, although part of me wanted to crawl into one of the manholes in the street since I wasn’t having a very good run.  I spent a little more time downtown cheering for some of the running groups’ full marathoners, while my parents headed home.

I’m not the only active one in the family–while visiting, my mom went out on her bike each day for 20-mile rides!  She arrived home after the first ride, convinced Andrew was trying to kill her; apparently the hills and potholes around here are much bigger than anything she sees in DC!  Here she is, rocking the Skirt Sports biking skirt I gave her for her birthday:

The boys played a round of golf and spent time hitting some balls at our local driving range.  Now that my dad is retired, he works part-time at a golf course for–what else?–the free golf!  Andrew also loves golf and gave up his work league this summer (there just isn’t enough time for it all), so I’m always glad when he carves some time out to play. He actually came home from their golf game and announced that he ‘thinks he’s more like my dad than he thought.’  Hmm…

We ended the visit with a big BBQ on Monday evening, which grew from ‘just my parents and in-laws’ to more than 20 people!  That’s what I get for inviting my nearest and dearest…  Mom helped me with a big grocery run, I whipped up some sides and we all put some finishing touches on the patio before our guests arrived.  I loved the mix of guests; everyone knew at least one other person in addition to us and it was fun to have all of my/our closest friends and family over for our first ‘official’ patio party of the year.