This is more than a week overdue, but, as they say, better late than never. Actually, it’s my OCD more than anything else that drives me to finish blogging about the challenge–once I start, I gotta finish.

For some reason, probably all those fries and wings at the Bar Bill the night before (which was repeated almost exactly this past Friday, too), I woke up early Saturday morning and decided to just get up.

I snacked on some of those awesome Paleo pumpkin cookies around 5 a.m.

Before our snowshoe trek, I made myself a Paleo pumpkin gingerbread smoothie, with a frozen banana, pumpkin, almond milk, molasses, almond butter, chia seeds, and vanilla protein powder. In the future, I think I would omit the almond butter and banana as I don’t think it needs either–they’re just extra calories. If I used plain protein powder, I might keep the banana for sweetness. 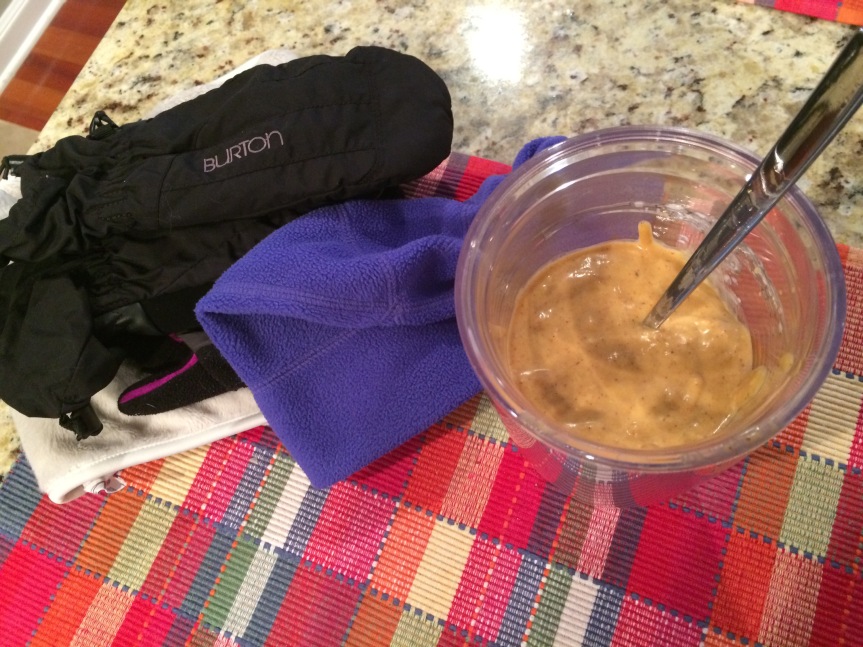 After snowshoeing, Andrew and I brought Hadrian to the dog park with hot chocolate. I snagged a couple homemade Larabars, too.

Not pictured: our late lunch of Pasquale’s pizza and wings at the Layers’ house. Yup, I ate pizza. And drank soda. It was fantastic. Not Paleo.

Also not pictured: dinner with Abigail and Marvin at one of our favorites, Arriba. Two margaritas, chips and queso and a chicken quesadilla. Also fantastic. Also not Paleo.

We met Marv and Abigail at McDonalds (of course) on their way out of town Sunday morning. I wasn’t in the mood for anything meaty or eggy, so I went with the oatmeal and a milk. Not Paleo, but arguably the ‘healthiest’ choice at said establishment. 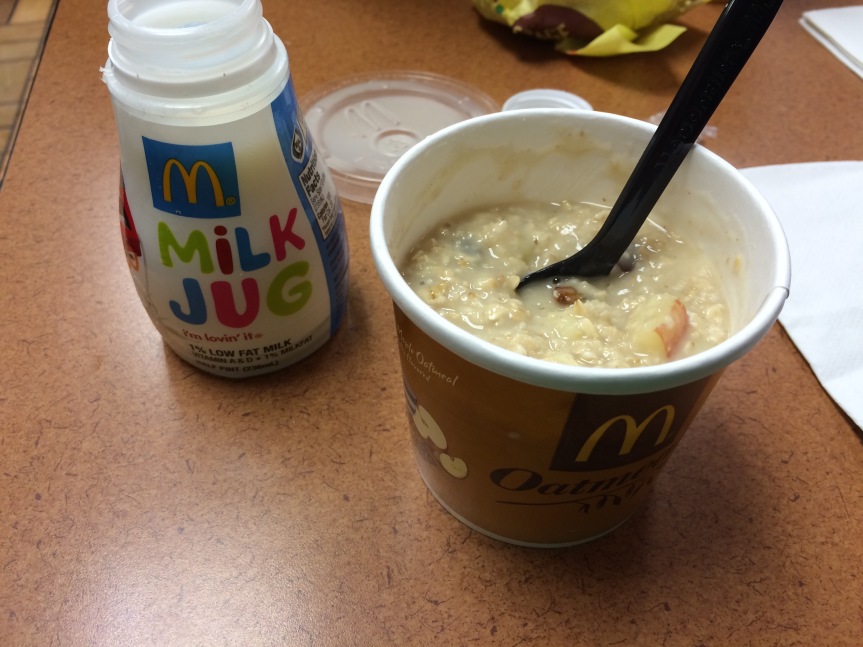 I’m pretty sure Andrew went off to church and I stayed home to prep my food for the week, and afterward we took Hadrian for another spin at the dog park. It’s becoming our new favorite hangout with other dog-owning friends on the weekends.

Anyway, Andrew and I went on a little ‘date’ to Taste and shared a fresh Belgian waffle. Wow. So good.

Last Sunday was also the Super Bowl, and we hosted a few close friends at our place. I threw together some veggies and dip, chips and salsa, and a white chicken chili. Pigs-in-a-blanket, Paleo chocolate peanut butter cookies and taco salad were brought by friends.

Stacey’s taco salad was fantastic. Again, I went to bed with a VERY full tummy that night, too.

I did think the event was a perfect opportunity to make those Paleo Mocha Bacon Brownies, from Practical Paleo.

I made them ‘extra bacon-y’ by using some bacon fat in addition to butter when making the brownies. I can’t say I loved them, but I did hear the leftovers were huge hits with some of Andrew’s GF and Paleo co-workers.

I felt our last weekend on the Paleo Challenge wasn’t really very ‘Paleo,’ but it is what it is. Or was. To me, it felt like a weekend of ‘debauchery,’ but Andrew didn’t share my view.

So that’s that. I’ll write a separate blog on how we felt about ‘going Paleo’ and how our eating pattern may or may not change from here on out.

Our big guy is celebrating a special birthday today! His sisters @thebodaciousbuffalo and @abisnail731 surprised him with this awesome yard sign! Be sure to wish him well if you see him today, or give a honk as you drive by! #fortieth #fortiethbirthday #maelleroselayer #yardsigns #happybirthday #lordylordylookwhos40
%d bloggers like this: