So, I may not be quite the ‘gourmet’ chef Andrew makes me out to be ALL the time…

…if you think THAT’S bad, you should have seen the other guy!  (a.k.a. the hunk of ORGANIC beef roast I bought for Pioneer Woman’s Carnitas Pizza.

(Actually, upon further inspection of the meat itself, it had only formed a nice ‘crust’ on the outside and was still quite edible on the inside–thankfully!  Otherwise, Andrew might have killed me.  In fact, I moistened the shredded meat with a little apple juice I had stashed in the freezer since our HOTEL STAY last year… Side note: I am my father (the pack rat)’s daughter.)

Apparently, leaving a roast in the oven while out of the house is too much for me to handle; not 10 minutes after we left for church I had a panic attack and tried to make Andrew turn around.  I suppose I could have done the math on the cooking time a bit better, and certainly should have added some more liquid to the pot before departing…

Anyway, her carnitas pizza (the recipe for which must not be online), piqued my interest from the moment I saw it in the book.  It’s a regular pizza crust–I used one I found in Artisan Bread in Five Minutes a Day (best one yet!)–with green tomatillo salsa, fresh mozzarella slices, sauteed red pepper and onion, then baked and topped with the warm meat and sliced green onions. 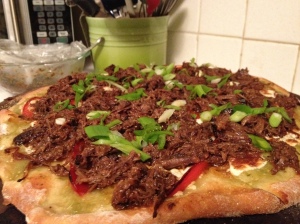 Let’s just say Andrew was on his 5th piece before either of us knew what was happening, but I suspect that had more to do with the crust than the toppings, unfortunately.  Or fortunately, I suppose.  I’m on the hunt for a go-to pizza crust recipe…could it be that the search is over?

I enjoyed the last two pieces for lunch today–YUM.  While I may not make the exact recipe again, PW does have a bunch of neat pizza recipes on her website and in her newest cookbook, and we seem to be on a pizza kick lately!  It’s the “best crust” hunt, I tell ya.  My favorite pizza, you ask?  HAWAIIAN, all the way.

And, just in case you were wondering about that pot….

…GOOD AS NEW!  Nothing a little elbow grease and a brillo pad couldn’t handle.