The other day, while we were at the Nyes’ house visiting, I (randomly) mentioned I’d been craving a cuban sandwich–you know, the kind with ham and swiss and a pickle?  No idea why I was even thinking about one at the time, but you know, that’s to be expected from someone like me.

Well, without a moment’s delay, Mr. Nye was in the cookbook cabinet and out came this baby:

The well-worn pages show it’s been loved and used for years (I saw a note by a recipe from 1998).  Mr. Nye explained that the recipe for the authentic cuban sandwich bread was in here, somewhere.  The traditional bread for the cuban sandwich is the ‘Pan Suave’ (which means ‘smooth bread’ in spanish–and, apparently, Cuban), as opposed to the Pan Cubano, which is made with lard.  The Pan Suave are also called ‘Cuban Sweet Rolls.’

I found it and decided to whip up some rolls this past weekend.  I even bought the ingredients for an ‘authentic’ cuban sandwich, which is ham, roast pork (which I found pre-cut surprisingly easily in the deli at Wegmans) and swiss cheese, as well as a mayo-dijon combo I could make at home. 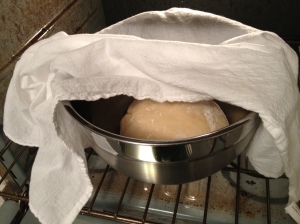 I was having a terrible time getting it to come together in my mixer and think I added a bit too much flour in the process.  I should have just kneaded by hand.

Aren’t they amazing?!?!?!  Despite adding more flour than probably necessary and not rising as much as I thought they might, they plumped right up in the oven.  Before baking, I brushed them with an egg wash and sprinkled them with sesame seeds.

I packed both Andrew and myself a pre-sliced roll for our lunches, put what I thought we could eat in the next couple days in the bread box and bagged the remaining rolls for the freezer.

Here’s my lunch at school:

One roll and the ham, pork, swiss and pickle packed separately, along with a little mayo-dijon. (Because no one likes a soggy sandwich…)

Assembled sandwich!  The bread was a bit dense (perhaps too much flour?), but it was chewy and sweet, almost cake-like. I can’t get over how ‘pretty’ they look.  I mean, that’s all that counts, right?  (No, not really, but it’s still nice when it looks like the picture.  Except that this didn’t have a picture…but I digress.)

This sandwich was great–filled me right up!  I love pickles on sandwiches–must do that more often.  Not sure I would make this recipe again–I’ll have to return the cookbook, I don’t make cubans all that often, etc…–but it was a fun project.

Wish I had a scanner to photocopy the recipe…