Before I forget, I posted my first official “Eat This” column for the EA Co-op’s blog the other day–it was on FIGS!  Check it out here!

I’m in an unbelievably good mood for feeling incredibly UNproductive this morning.  I woke at 6:15, and then putzed around while drinking coffee and eating breakfast; I didn’t leave for the gym until 7:45!  I had had visions of ARRIVING by 7, when the gym opens.

I lifted weights for 30 minutes, then went to change into my swimsuit and realized I’d forgotten my shower shoes!  I couldn’t bear the thought of walking to and from the pool and showering without them, so I packed up and went home.  Ran into Wegmans for some random items (salad dressing–I’m having salad for lunch today–dryer sheets, vitamins and this month’s O magazine–Kath’s PUMPKIN recipes are in it!).  I started thumbing through the issue in the check-out line and saw a giant “whole grain” spread featuring recipes from Kim Boyce, author of one of my FAVORITE cookbooks, Good to the Grain.  SCORE!

I had thought I’d do some cardio here at the hotel, but I don’t really have time anymore, so I’m calling it my “idiot tax” for the day since I didn’t blog early this morning, which would have freed up some time now.  Oh well.  But then I wouldn’t have this nice story to tell you about my unproductive morning and magazine find at Wegmans!

Anyway, on to the REAL story:  my dinner with Emily last night!

I actually didn’t MEET Emily until last night; she’s another blogger I found through Kath’s website.  After I decided to go back to school, I emailed Kath and told her how much she inspired me and that I’m a huge fan, etc…  (Yes, I really did.  A little silly?  Perhaps.  But don’t we all like a little unexpected affirmation every once in awhile?)  Anyway, Kath has a list of current and future RDs and their blogs on the “R.D. Me” section of her blog.  She said she’d add my blog there (yay!) so I went to check it out.  Sure enough, “Holly @ thefrozenpineapple” was there!  I started clicking on some of the other blogs listed and came upon “Eating Chalk,” Emily’s blog.  She said she was a recent transplant to Buffalo and currently in the Dietetics Program at Buffalo State–SMALL WORLD!  I immediately emailed her and we’ve been trying to meet up ever since.

She lives up near Elmwood, which is a main thoroughfare lined with cute stores and eateries in the nice part of downtown Buffalo.  We decided to meet at India Gate for dinner.  I could just end here and say we had a great time, have a lot in common and that the food was good.  And all those things would be true.  However, there is SO MUCH more to the story.

Like the rain. It was POURING.  I was wearing sandals.  And jeans.  I did, however, have a raincoat and an umbrella, neither of which helped.  NOT AT ALL. 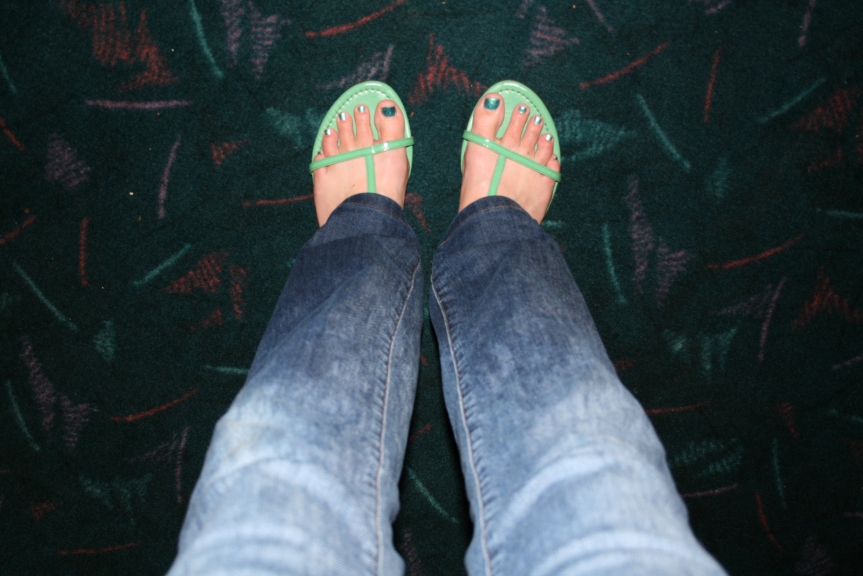 And the parking.  When we first decided to meet near Elmwood, I’ll admit my heart started palpitating knowing I’d have to, inevitably, parallel-park somewhere.  I don’t parallel-park often.  And I have a giant car.  SUV, rather.  I CAN parallel-park, I just don’t do it often enough to be good enough to whip in-and-out of spaces like Andrew does, which is quite a feat when you consider other factors like visability and traffic.  Well, it was rush-hour on a Friday night at the most hopping place to go out in Buffalo and POURING and other people were whizzing by me…  Bottom line:  it was terrible.  I wanted to cry.  I called Andrew in a panic.  (He was hundreds of miles away on his way back from Penn State, so I’m not really sure how I thought he could help, but whatever.)

After circling the block a couple times, I found an opening and managed to back in.  I think I always go in at too much of an angle because my back tire always ends up on the grass…  Oh well, it was pouring and I didn’t care.

I attempted to avoid the growing puddles and eventually gave up–my feet/sandals/jeans were soaked in seconds.  As I approached the intersection of Elmwood, it DID occur to me to look and see on which street I’d parked–points for me!  Seriously, I’m always with Andrew and since he has GPS built into his brain, I never have to worry about where we are at any given time.  I’m not used to this “paying attention” thing.

However, in my panic and unfamiliarity with the area, I realized I didn’t know which way to TURN on Elmwood to get to the restaurant…  It should be obvious, I realize, but I’m not so good with directions.  I said a quick prayer (I did) and made the best educated-guess I could: right.  Praise God, it worked!  I scurried down the street and into the restaurant! 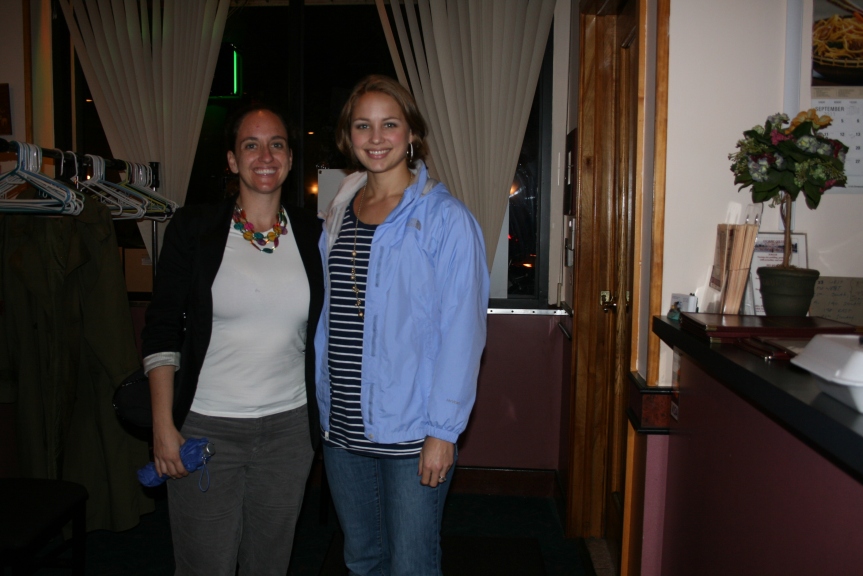 Emily, who was also soaked to the bone, and I commiserated about the weather for a bit before digging into the subject that unites us: studying nutrition!  It was so nice to chat with her about the program at Buff State and classes.  I’m so glad I have someone to whom I can direct some of my questions; I feel a little disconnected right now being at ECC just taking pre-reqs.

I also found out she’s a runner, too, and she told me about the Niagara Falls International Half Marathon coming up next month in Canada–I think I’m going to sign up!  It’s called “international” because the full marathon starts here in NY and ends in Canada–it’s the only one like that in the world.  I’ve been DYING to break the 2-hour park “officially” in a half…  I’ve trained much faster, but I always choke in races.  I’ve figured out that it was because I was always going out way too fast (darn you, Susy!), so hopefully I can have a good, fast, even-paced race.

We got an order of naan and raita–I cannot have Indian food without it!  I’m surprised these photos actually turned out OK for the lack of light.  Now, if only I remembered what setting I was using…

I love that Indian rice comes with carrots and peas.  I so miss Jeet!  I LOVED their lunch buffet! 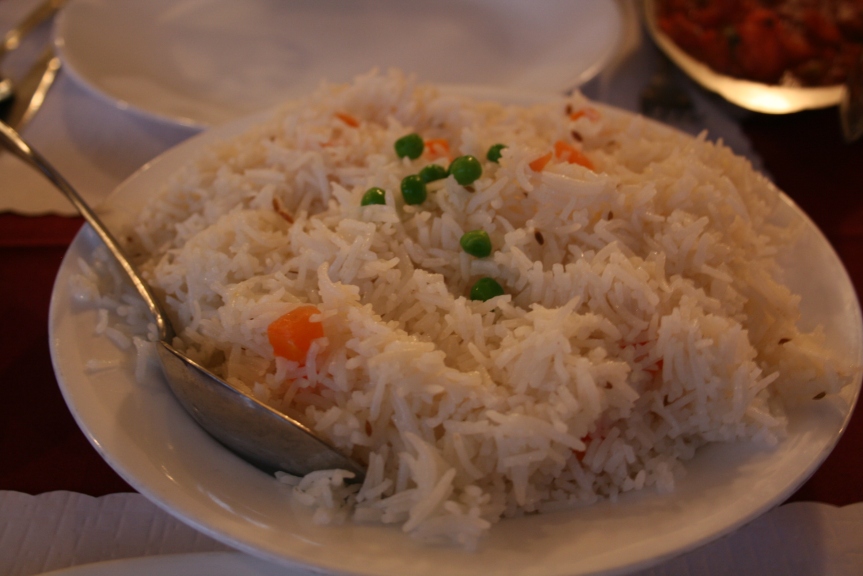 I ordered the Chicken Tikka Masala, which is my favorite dish.  I was a little disappointed that it didn’t taste ANYTHING like the version I’m used to, although I have no idea which is more authentic…  This one wasn’t creamy at all, and I’m pretty sure typical Tikka Masala does have cream in the the tomato sauce, so I wasn’t really sure what to think.  I ordered it “medium” (instead of mild) and I was able to eat it, but my mouth was on fire!  I liked how big their menu selection was, but since it’s all the way up in Buffalo (not to mention Andrew isn’t a huge fan of Indian food), I’m not sure I’ll be back anytime soon. 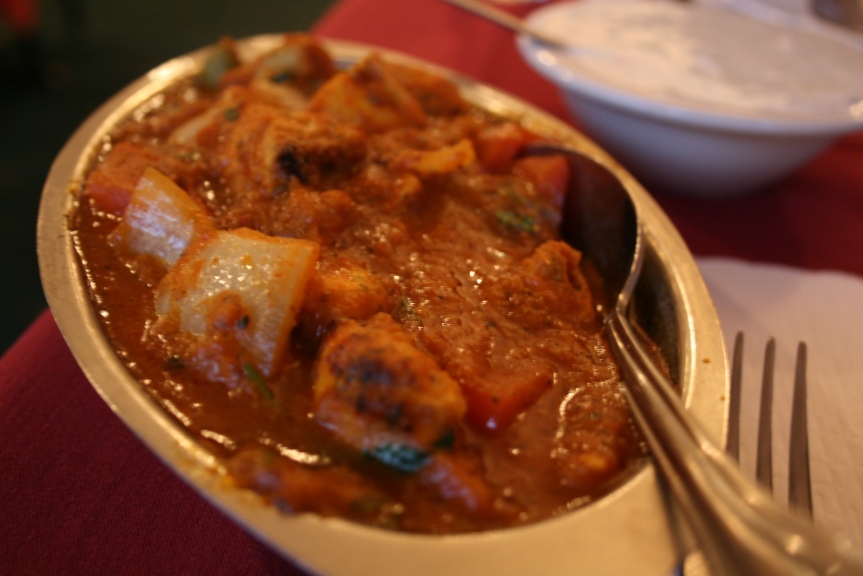 Thankfully it stopped raining while we were eating, so the walk back to the car was relatively dry.  Emily and I said goodbye and plan to do another lunch or dinner “date,” this time in East Aurora so I can show it off to her.  She and her husband, a med student at UB, are city-people, so they don’t get to the Southtowns much.

I have a busy day ahead of me: photo-taking for the EA Co-op blog, an interview (I’m writing my first freelance article for the East Aurora Advertiser!), HOMEWORK, and then maybe meeting up with the family later.  Today is moving day for Carolyn; she recently accepted a long-term sub position in Olean, which is more than an hour away.  She’s been commuting since school started until her lease here was up–today she’s moving to her new place in Franklinville, which is about half-way in between Olean and East Aurora.  Andrew is providing some muscle for the move and I wish I were there, too!

2 thoughts on “two future RDs in a small world”