I didn’t get a chance to post this last night, and my breakfast wasn’t anything worth taking photos of (although I did add frozen cranberries to my smoothie this morning–a first for me), so I figured I’d lump the photos in with tonight’s dinner.

I’ve been on what seems like a constant quest to empty out our tiny freezer here, which is filled with my stash of nuts and frozen fruits, among other things.  I had one pound of beef remaining, and I didn’t want to make burgers.  Sloppy Joes it was!  I found Ellie Krieger’s recipe in the cookbook of hers’ that I brought with me to the hotel. 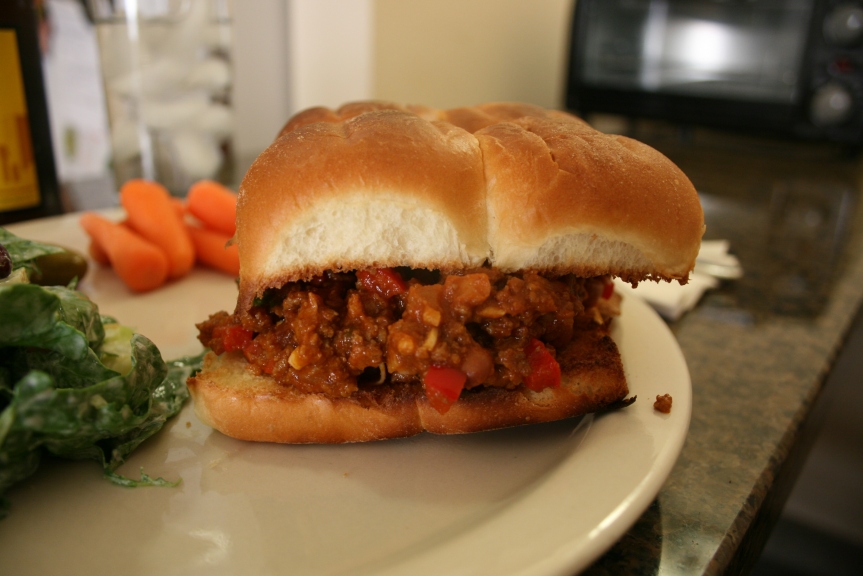 It’s made with lean ground beef, the usual ingredients (red pepper, tomato sauce), flavorings (molasses, Worcestershire sauce, etc..) and one from left field: pinto beans.  As per my usual modus operandi with beans as an ingredient, I added half what the recipe called for.  I do this because Andrew isn’t a huge fan of beans (who am I kidding?  He doesn’t like them.), but I feel the need to at least try to stick to the integrity of the recipe, so I just use less.  Or another variety altogether.  Neither Andrew nor I like kidney beans, so I’ll sub pinto or white beans sometimes.

Beans fall into the “try them until you like them” category for me.  There are so many things I hated as a kid that I now like (or at least don’t hate) as an adult because I’ve continued to eat them.  I mean, I don’t LOVE beans, but I know they’re good for me and that they can be wonderful in certain dishes, so I eat them.  And come on.  How old are we? We can’t always eat only what we like.

I served Andrew’s sloppy joe on four leftover hawaiian sweet rolls that I kept intact and then sliced down the middle.  They created a nice, large bun for his sandwich.  I used some leftover dressing from the quinoa for a spinach salad I whipped up.  It was all green (spinach, celery, green onions and cucumbers) with some dried cranberries for color and sweetness.  Apparently, Andrew didn’t like the dressing (although he didn’t complain about it on the quinoa), so he pretty much turned up his nose at the salad.  Oh well.

I do have another recipe for sloppy joes I’ve used before that he said he prefers, so I’ll either use that next time, or maybe I’ll come up with my own.  I don’t normally do that (I really like using recipes from my cookbooks–it’s like crossing things off a list), but I really would like to make a healthy, from-scratch version that tastes like the canned stuff you get in the grocery store (because that’s what Andrew wants).

Anyone have any recommendations? 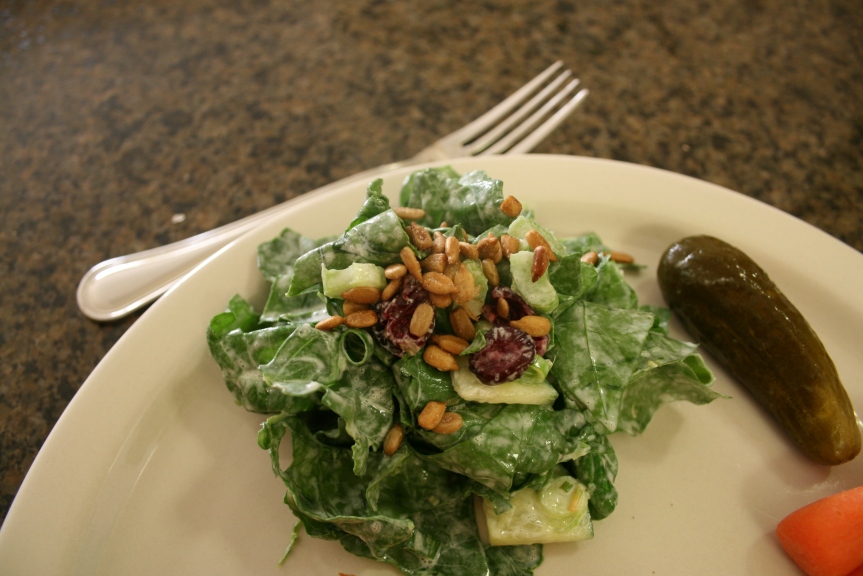 Tonight I made another of Ellie’s recipes, this time her Curried Butternut Squash Soup.  Yet another meal driven by freezer contents, this one used up a bag of frozen squash puree.

Barefoot Contessa has multiple butternut squash soups, to include a curry version, so I’ll have to do a “butternut squash soup cook-off” sometime this fall to determine our “go-to” soup.  I love doing cook-offs with recipes I have in cookbooks.  There is just something about having made all the different versions and definitively picking a winner that gives me such satisfaction. 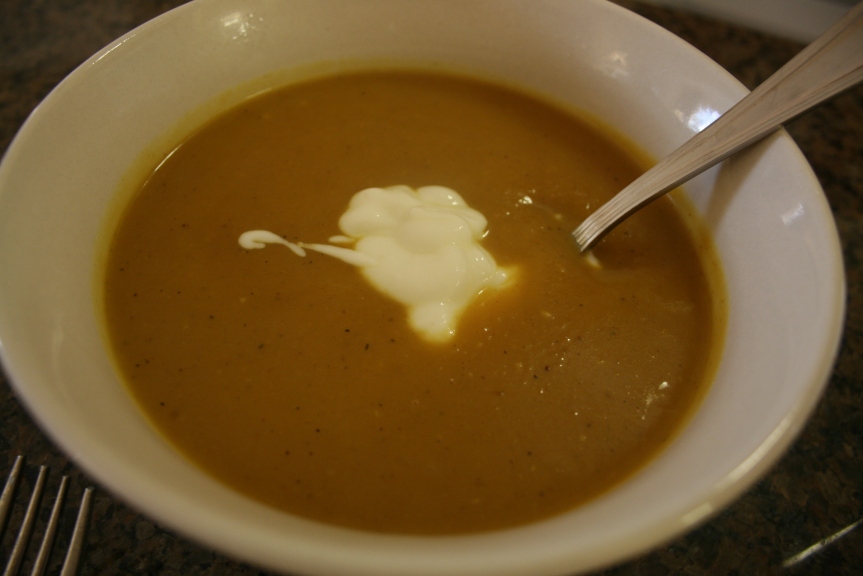 Both Andrew and I really liked it.  It definitely had a strong curry flavor, with just a hint of sweetness.  And so easy to make (especially when the squash is already cooked and pureed!); you basically saute some onions and garlic, add chicken stock, curry and squash and boil.  I pureed it in two batches in my blender since the onions were still in chunks. 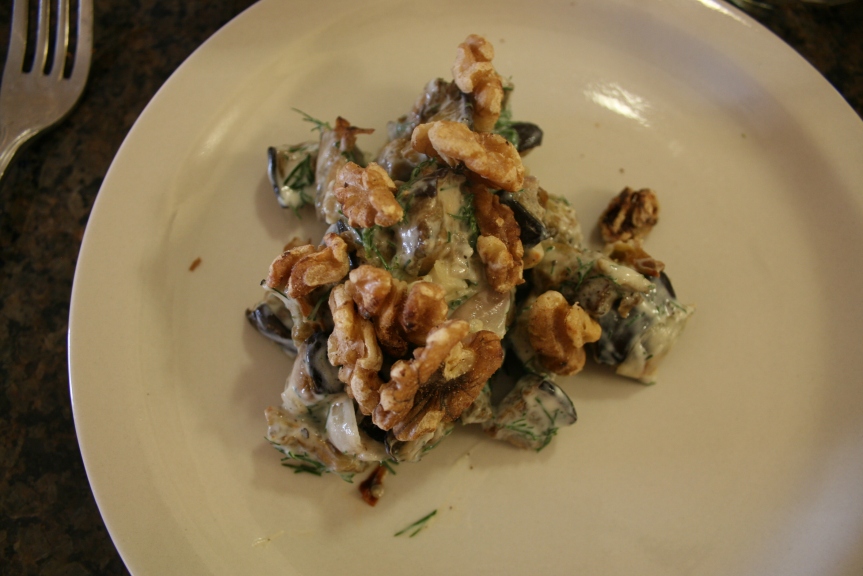 I served the soup with an eggplant and yogurt dish I’d torn out of a Food Network magazine forever ago.  Another easy one, you just cut up eggplant, roast with shallots and garlic, then dress with yogurt and dill and toasted walnuts.  YUM.  Unfortunately, Andrew took one bite and declared he wouldn’t eat it, so I ate his, too.  (I’d anticipated something like this, so I wisely divided up the two servings of eggplant into three smaller ones, so I really didn’t end up eating that much.)

They may not have all been home runs, but I enjoyed making them all and writing notes down in my cookbooks.  I’ll be feasting on leftovers tomorrow!