Andrew, Abigail and I joined some of Andrew’s friends from work Sunday at Ontario “Beach.”  I use quotation marks here because, as someone who grew up vacationing in Florida and North Carolina’s Outer Banks, I find it extremely difficult to call anything other than the sand along a bona fide ocean, a beach.  I mean, just because the Great Lakes are all huge and beach-like, they still aren’t oceans.  There are no waves, no crabs, no salty sea air. 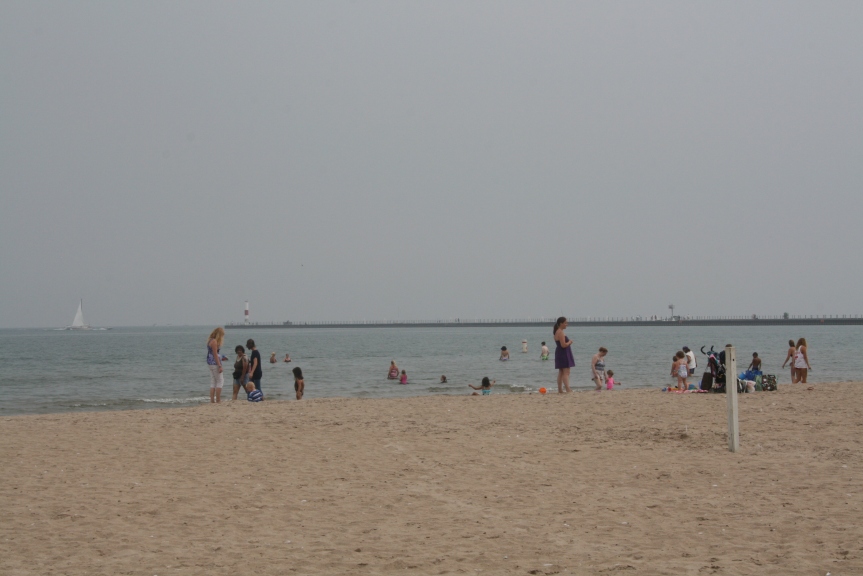 This is Ontario Beach.  As you can see, it is pretty much like a beach.  What you see on the right is a jetty and on the other side of that were a bunch of sailboats.  We didn’t have the best weather; it was pretty overcast much of the morning, but warm and even a bit humid (for here).  Ontario Beach is about an hour and a half northeast of East Aurora.  There are “beaches” closer to EA, but they’re on Lake Erie. 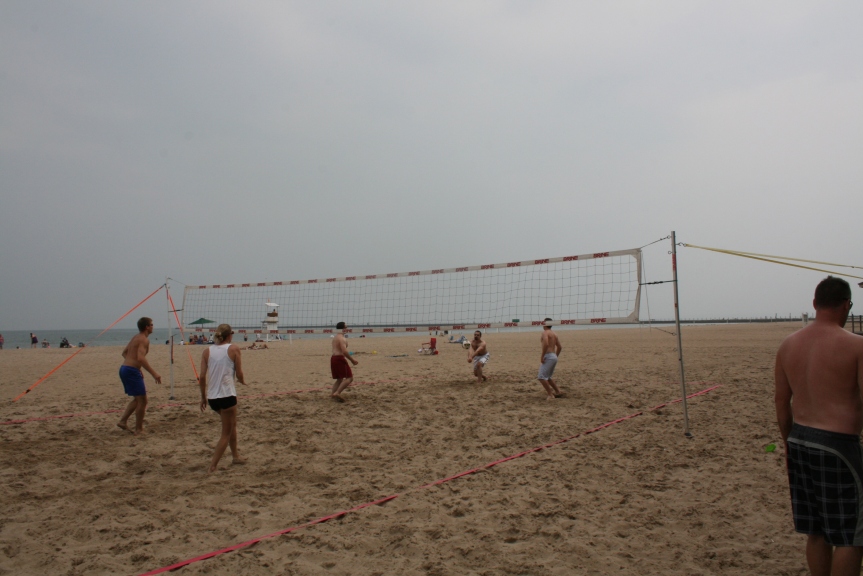 We were invited by one of Andrew’s friends from work, who apparently gathers with some of his family and friends here each summer for some (relatively) intense volleyball. 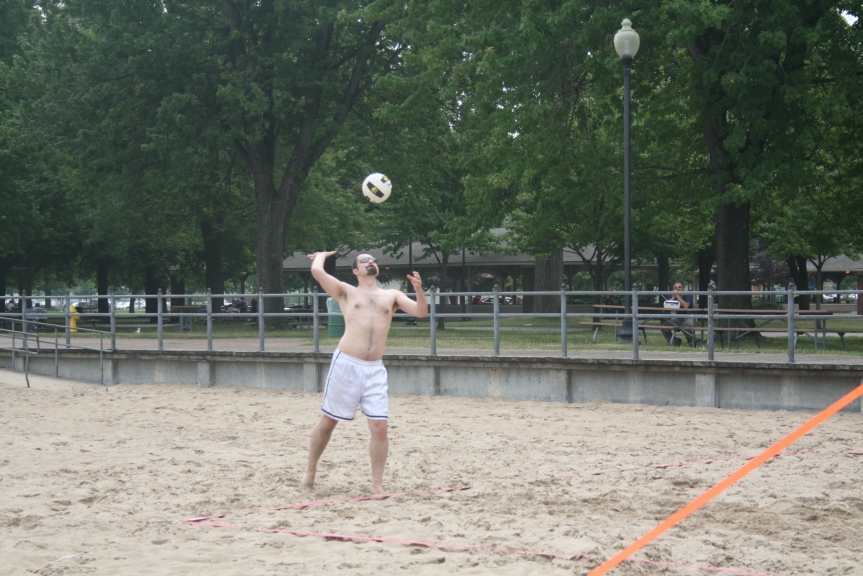 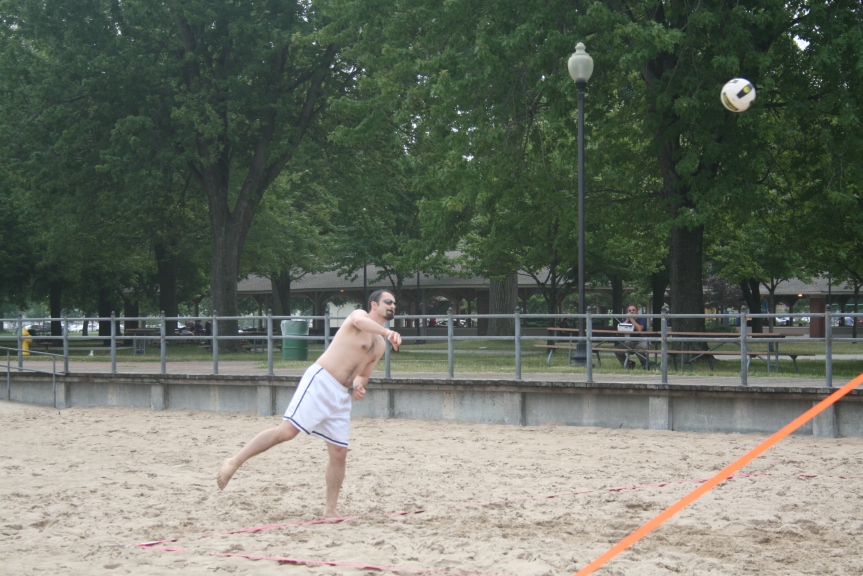 Andrew joined right in for the volleyball. 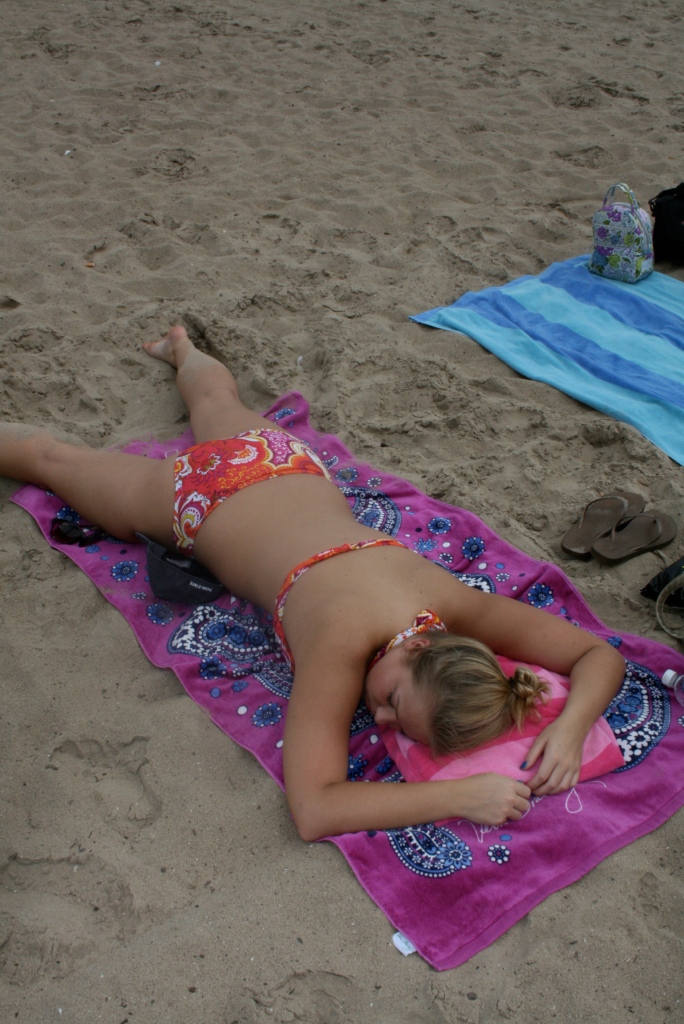 Abigail and I aren’t volleyballers; in fact, we’re the kind of players you want on the OTHER team.  So, Abigail did what she does best: laid out, soaking up the sun.  I enjoy lying out as well, especially since I have a sports bra and shorts tan, but I get bored easily if I’m not reading, so I mingled and took photos of Andrew playing volleyball.

Before too long some light rain drove us all inside, so we headed to this joint (apparently a favorite of the group who came out last summer) for some lunch:

I didn’t bring my camera (wish I had!), but it was just as shady on the inside as it looks on the outside.  They’re known for their steak sandwiches, but it was the bun that really did it for me.  Again, I wish I’d had the camera.  (There wouldn’t have been anywhere to put it; we were swished like sardines into booths.)  Anyway, imagine a really thin steak on a bun that was a cross between a potato roll and a croissant.  YUM.  It was a bit flaky and buttery and kinda smooshed when you grasped it.  I made mine into a cheeseburger with ketchup, mustard and pickles.  Andrew had his with grilled peppers and onions, and Abigail ate hers’ plain.  The three of us shared a vanilla milkshake with a splash of root beer.

Once we all finished lunch, we piled into our vehicles and headed to Andrew’s friend’s uncle’s house.  Hi Uncle Al! 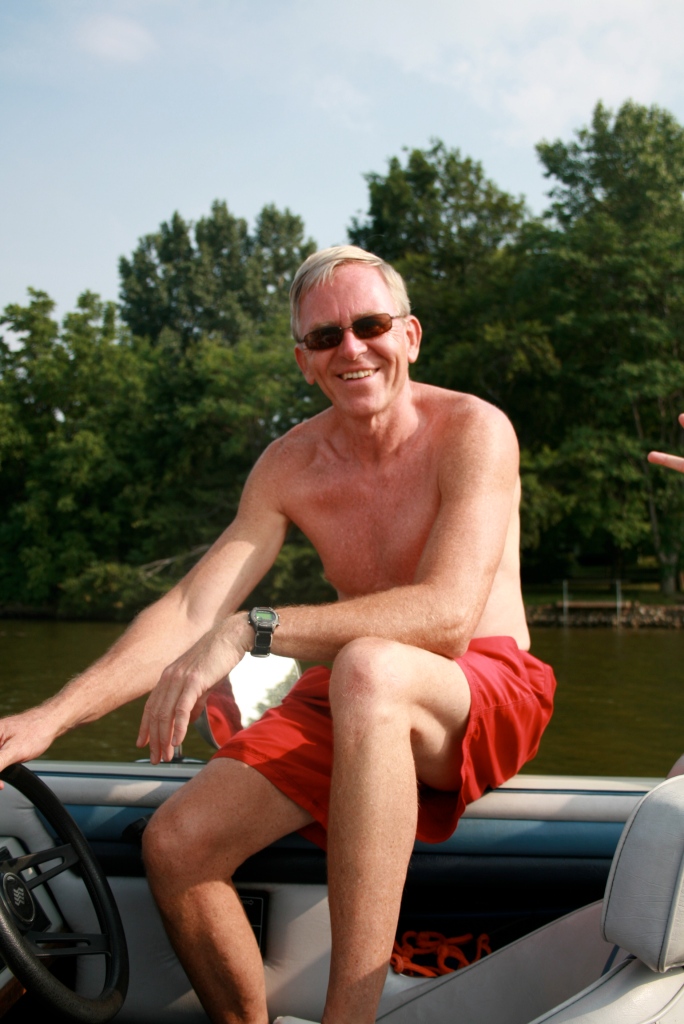 Al has lived just off of Lake Ontario for the last 25 years.  He took the 11 of us out on the lake for tubing and water skiing for the next few hours.  The weather gradually improved until it was beautiful around 4 p.m. I haven’t been tubing for three years, since last vacationing with Andrew’s family on Lake Tippecanoe in Indiana.  I thought I was getting too old, but apparently not.  I had a great time yesterday and escaped without a bruise. 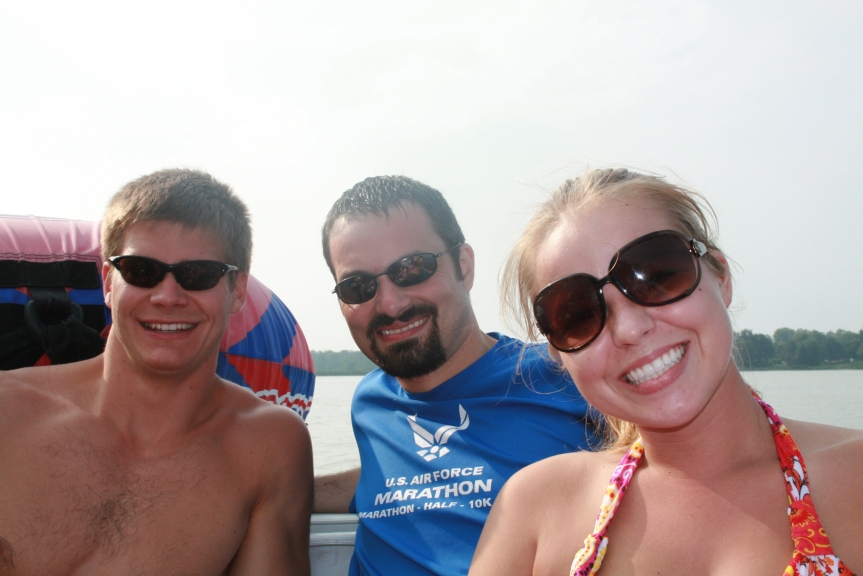 Bart, Andrew’s friend from work and who has made an appearance on the blog before, drove us up for the event. Thanks Bart! 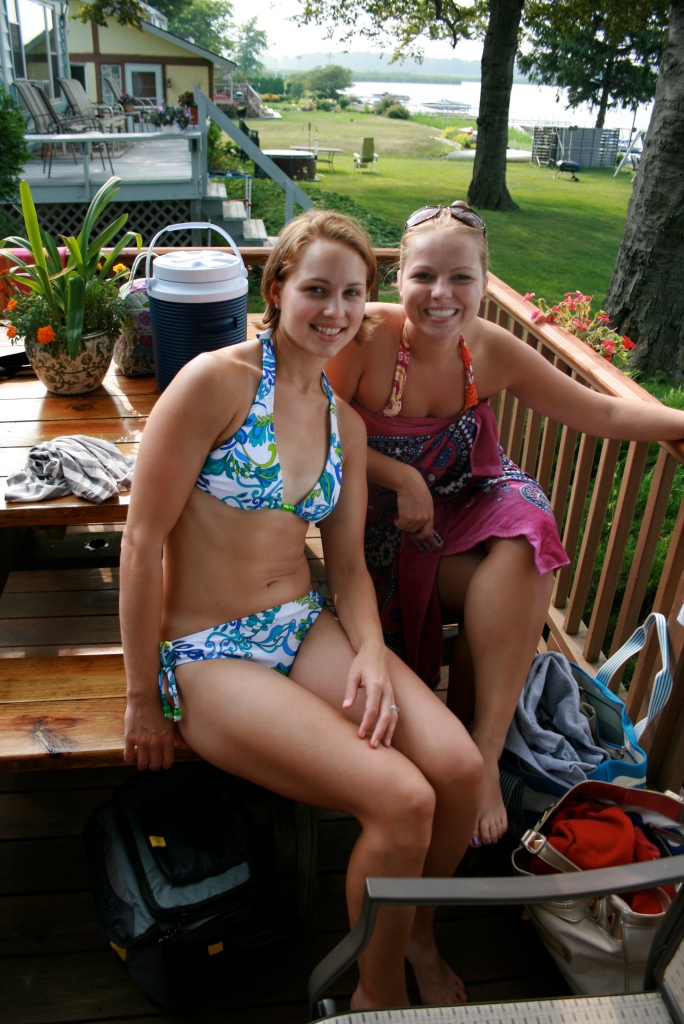 After boating we gathered on the deck before grilling hamburgers for dinner.  Check out my suit!  This is the one Andrew and I scored last-minute at JC Penney’s.  LOVE IT. 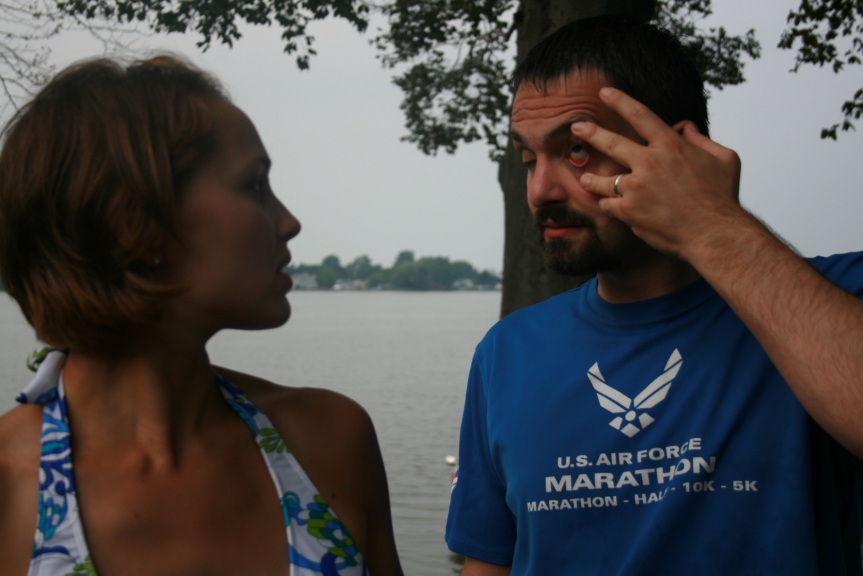 Andrew lost his contact in the water…must have been all that aggressive tubing!  For those who don’t know, the only appropriate way to tube when there are multiple people out there at once, is to fight to the death until someone falls off.  You’d think adults would be past this; sadly, they aren’t.  (I, on the other hand, am completely content to have a wild ride in which I have to work to hang on, but don’t need to worry that someone from another tube might jump on top of me or kick me off.  Just saying.) 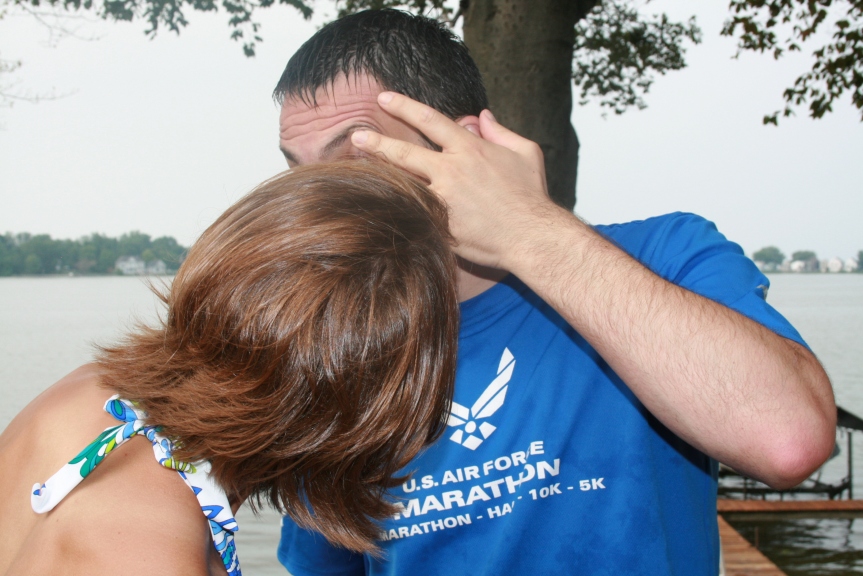 So THAT’S what my hair looks like from the back!  I’ve always wondered… It’s more reddish-brown than I thought.  And flippy.  Obviously, this is an “un-styled” look since I’d been in the water, but good to know.

We left around 8 p.m. for our long drive home.  Miraculously, no one in the car fell asleep!  I have heard, however, that everyone had a hard time getting going this morning…

One thought on ““beach” day”