Last month, I wrote about ‘natural flavors.’  Be wary of this term in packaging and the ingredient label, as it’s an umbrella term that can mean almost anything…as long as it was once a ‘natural’ ingredient.  That isn’t to say it’s always bad; it’s simply worth checking out beyond the information provided on the label, perhaps via the company’s website.

END_OF_DOCUMENT_TOKEN_TO_BE_REPLACED

Of course, I said no.

No, because I wanted to RELAX during my first weekend free from school.  I wanted to sleep in my own bed.  I didn’t want to worry about organizing and packing (much less locating) all our camping gear up.

What’s that you say?  Camping IS relaxing?  Yes, camping is relaxing ONCE YOU’RE THERE and unpacked and the weather is perfect and SOMEONE ELSE did all the planning for you.

Well, once Andrew offered a little more information, like that he knew where our camping stuff was, and that the campsite was only a 30-minute drive and that we didn’t have to go until dinnertime on Saturday, and that another female had already taken care of much of the food planning, I started to warm up to the idea.

So we went.  And it was fun.  The location was actually the giant parcel of land (100 acres, maybe?) belonging to the family of one of Andrew’s co-workers.  There was a tiny ‘cabin,’ but it was all but useless.  Apparently it’s being remodeled/renovated later this summer…

Disclaimer: it’s looks a little red-neck, and maybe it was.  I mean, there were dirt bikes for pete’s sake!  At least they were all Moog engineers, (except me–a student–and the friends’ fiancee–a teacher) which really just means that the bikes were NICE and in good shape.  I don’t know why, but that fact made me feel a bit better.  I mean, we were in the sticks.

Hadrian had a blast.  Actually, that would be understatement.  He’s never had so much fun in his life.  He’s still sleeping it off… 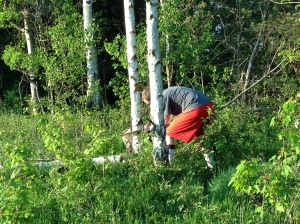 Dead trees were cut down with a chainsaw for firewood…

Bananas were sauteed in butter as appetizers…  Amazing!  Slice some up and throw them in a skillet with butter–I dare you not to love them.

Dinner: corn, beans x 2 and burgers (note Andrew’s cheese-less patty).  Sahlen’s hot dogs and brats were next, as well as some surprisingly good Wegmans pre-made potato salad.  I’m not usually into pre-made “tub” salads, but this one wasn’t bad at all.  Actually kinda good.  Must be the camping talking.

We set our tents up in row on the makeshift driveway.  Thank goodness for air mattresses–I don’t care that it’s not hard-core camping; I value my sleep, AND my back!

Plus, there was NO TOILET.  It was trees and thank-goodness-I thought-to-bring toilet-paper–tell me that’s not hard-core!  I mean, even our boundary-waters trip up in Minnesota and Canada in which we had to CARRY OUR CANOES (wish I’d been blogging then!) came with holes in the ground at each campsite…

Not surprisingly, I was up before 6 a.m. the next morning.  Between the birds and other woodland creatures, nature is just deafening at sunrise!  I did, however, come prepared:

I paired a banana and some peanut butter with my Bible study and enjoyed some peace and quiet before people started stirring around 7:30.

Also brought running gear in case the opportunity presented itself.  (It did, of course.)

I took Hadrian with me for a loop I think was about 2.5 to 3 miles.  HUGE downhill one way, HUGE uphill the other.  I dropped him off at the campsite and did it again myself, this time in reverse once I got to the bottom so I could run the middle, more shaded, less hilly length twice on the second go-around.  Fifty-four minutes later, I was pooped!

We ended our short stay with Andrew giving one of the dirt bikes a try.  He had fun, but I don’t think he’s itching to go buy one any time soon…  That’s the problem with having lots of single male friends–they all have expensive toys!

This is what happens when Holly goes to Wegmans for ‘a few things:’

Hey, at least it’s all healthy, right?  Just LOOK at all those colors!

-bananas and spinach (only one left in the house–yikes!)

-strawberries (because I’ve waited all winter long for them)

-red pepper and sugar snap peas (homemade hummus is in the fridge as we speak–or type, rather)

-wheat germ (for a bread recipe)

OK, I’ll admit, I totally got sucked into the Nature’s Market section (like I ever DON’T?) and some SALES caught my eye… 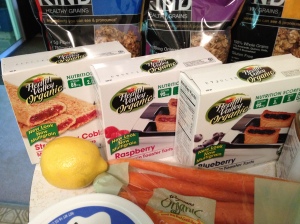 …like this one for Health Valley Organic cereal bars and ‘pop tarts.’  It was $1 off each, and the blueberry was just calling to me.  (Blueberry totally has been these days!  I already made a plan to make Ellie Krieger’s blueberry muffins this weekend…)  I figured Andrew would like the strawberry bars and I could mix some warmed ‘toaster tarts’ into our morning breakfast routine.

And then there was the sale on granola: 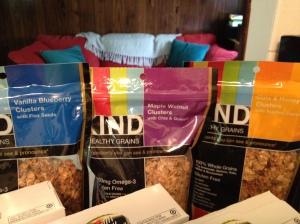 It was $1 off, too!  In my defense, we’ve been out of granola for awhile now and I said to myself (out loud, of course) that I should get some more soon.  I initially saw the ‘vanilla blueberry with flax seeds’ (there is that blueberry again) variety and grabbed it, only to then see the ‘maple walnut with chia and quinoa’ and ‘oat and honey WITH COCONUT’ flavors…  There was just no deciding between them.  At least they’ll last awhile…

Side note: Some of you are probably wondering why I would BUY this stuff when I can make it all myself, which I actually enjoy doing.  A couple reasons:

1.  I’m EXHAUSTED, and surprisingly busy.  I’ve been catching up on random stuff since finishing up with school, as well as tackling a bunch of things that popped up, like arranging summer travel plans and working out a new gym routine.

2.  I don’t really enjoy cooking in this kitchen.  It sounds bad, but it’s true.  Until I have ‘my’ kitchen, it just isn’t the same.

3.  I’m starting The Hunger Games soon (maybe this weekend!), which will consume me for however long it takes to read them all.  Andrew, I apologize in advance–I’ll make sure we’re stocked up on the unhealthy food you insist on eating when I don’t cook.  Or maybe not.

5.  And lastly, I am (unfortunately) about to become just as busy as before.  My summer online class starts in a little more than a week and I already took a look at the online info…  It looks INTENSE, to say the least.  Fantastic.

So yeah, despite ending school, I won’t be found in the kitchen too much just yet…

OK, back to groceries….

The Justin’s was on sale ($6.99 instead of $8.99… still pricey, but oh, so good!) and I’ve been eyeing this Cinnamon Raisin Swirl variety EVERY TIME I GO TO WEGMANS.  EVERY TIME.  I pulled the trigger today–why not?  Kath eats almond butter on her carrots sometimes, and ever since I saw one of those photos I’ve been intrigued to try it.  I thought the Justin’s would be the perfect accompaniment for some carrot sticks.  (Oh, have I told you all I’m eating raw carrots now?  I went my whole life HATING them, and then all of a sudden, they’re fine.  What’s with that?) 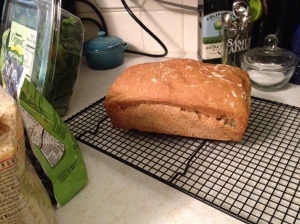 Beautiful, wonderful-smelling homemade bread.  What better with which to pair the new cinnamon raisin peanut butter??