Andrew and I went downtown last night for a concert by the harbor, followed by a little grown-up bar-hopping with friends.  Actually, in all honesty, Andrew and I hopped just once; we said our goodbyes at 1 a.m. while our compatriots walked to the next watering hole.

Like I said, we’re too old for this stuff.

But, enough with the negative talk; we had a great time out and were both surprised at how late we made it before deciding to head home, mostly to rescue the dog, who’d been left alone since 6 p.m.

Grace Potter and the Nocturnals opened the show and the weather could not be beat; not too hot, not too sunny and altogether quite pleasant.  Summer here is so livable. 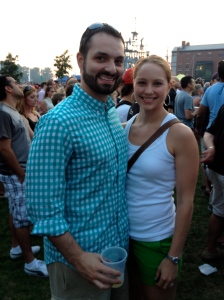 I broke out my new green shorts–love them!  Kudos to Andrew for all my colorful birthday clothes this year 🙂

The headliner was the Sam Roberts Band, from Canada.

I’d never heard of either group before, but they’re both from near here (Grace Potter is from Vermont), which was neat.  Apparently the Buffalo/Montreal/Toronto area is big for up-and-coming bands–I had no idea!  And did you know the Goo Goo Dolls are from Buffalo?  They are, potentially, one of my favorite bands of all time.  (That’s not saying much since I barely know any of their songs, except their hits, and am an all-around non-music person.)  But I love their sound; it’s not distinct like other genres (Country), nor is it “catchy” like so many of the boy bands and things on the radio.  The Goo Goo Dolls are timeless.

As the show wrapped up we headed out, first to Founding Fathers, a local “smart-people” bar (that’s what I call it) that features free popcorn and make-your-own nachos, as well as an extensive selection of microbrews.  And oh by the way–it’s decorated with presidents and flags and other “americana” memorabilia.  And the well-dressed older gentleman behind the counter?  He owns the place.  And it attracts a bunch of preppy college kids and middle-aged men in suits; I can feel comfortable in a place like that.  We have yet to go to their monthly trivia night, but intend to as soon as our schedule allows…

After a drink there we all walked to Laughlin’s, which is apparently an uber-fancy restaurant during the day, and a less-swanky bar at night.  Really, it was relatively unimpressive, but we had plenty of room to rest our tired feet and just chat.

It was en route to the next establishment that Andrew and I said our adieus; I had a gym class in a mere seven hours!

By the time the lights went off at home, it was pushing 2:30 a.m.  Again, we are TOO OLD for this kinda stuff.  And when Hadrian and Andrew needed potty breaks at 7:30 a.m., my eyes took a little more effort to open than usual, but overall I felt quite good despite our late night.  (I credit my good drinking habits–fewer than one drink per hour–for me–and LOTS of water before, during and after.  Works every time.)

I did, in fact, make it to the punk rope class at the Y, but just barely.