I feel like I could write an entire blog post on how parenthood is different than what I expected, but I’ll limit this one to only those related to baby food.

(Feel free to stop reading now if that’s not your jam.) Ha!  See how I did that?

First, a picture of my adorable daughter ready to eat! 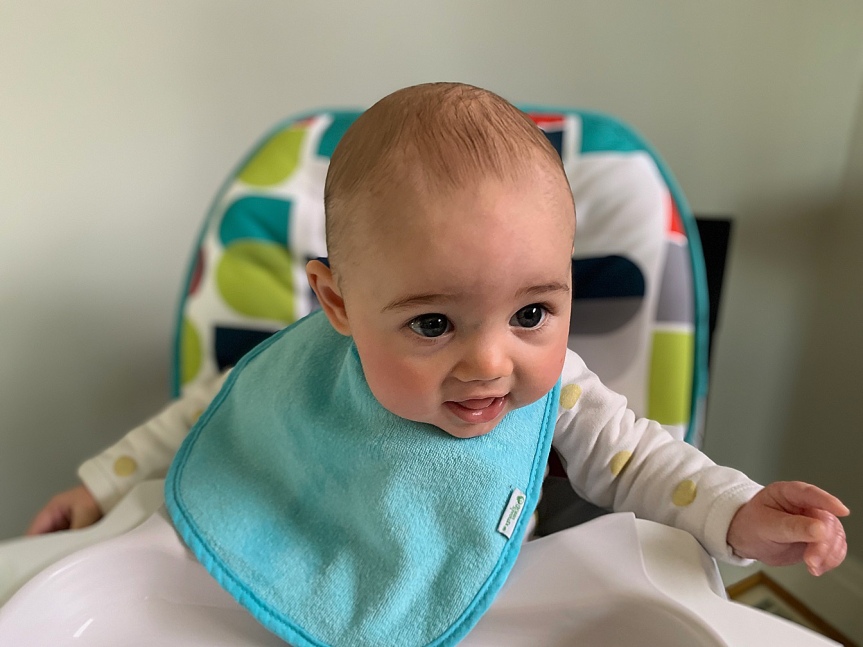 Expectation:  That I would make all of my baby’s first foods.  As a dietitian and foodie, I genuinely wanted to make baby food.  I used to gift baby food cookbooks at baby showers, and yearned for my turn to use my very own Beaba baby food maker.

Reality:  Ain’t nobody got time for that, especially a new mom during the holiday season.  High-quality, organic baby food in convenient jars is available for almost nothing at every grocery store around.  I was surprised at how much fun I had picking out a selection of jars, pouches and teething biscuits for her to try!  I did puree some sweet potatoes to freeze in an ice cube tray while I was making sides for Thanksgiving, but that’s as far as I got.  My mini food processor is currently on the fritz, so there won’t be any pureeing in the near future. 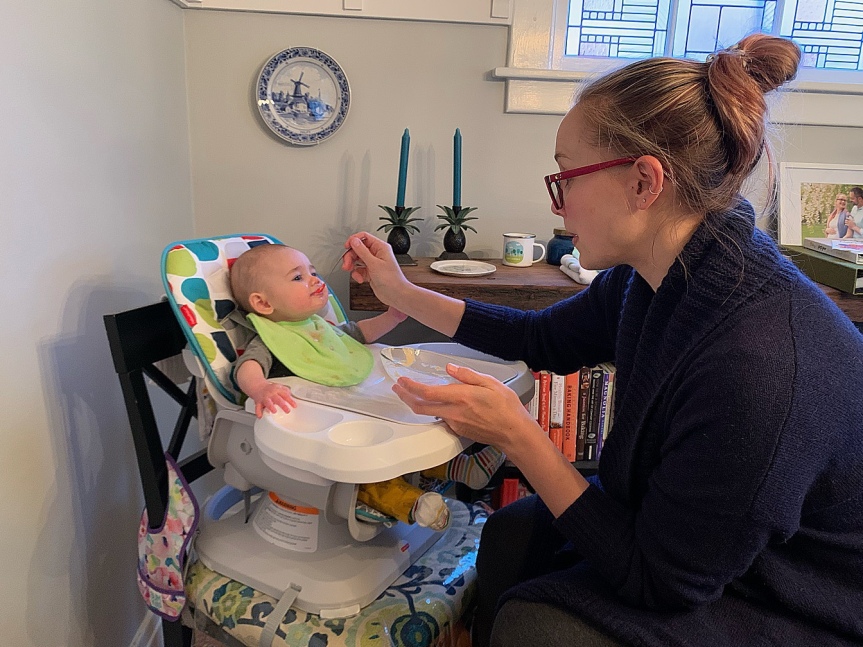 Expectation: That we would do Baby-Led Weaning.  (I learned of this technique relatively recently, and then got used to the idea of NOT making baby food.)  Essentially, BLW encourages parents to give their babies soft foods (i.e. banana, avocado, cooked pasta) at six months with the idea that babies will learn about the different textures of foods and be more ‘in charge’ of what they eat. Obviously, this type of feeding must be closely supervised to prevent choking, and not much is eaten early on.  In theory, it’s a great concept with some really great benefits, such as increased food exploration and independence in babies, and helping to do away with the idea of ‘baby food’ and the reliance on highly-processed ‘baby food’ items, such as puffed snacks and even purees.

Reality:  Maelle needs to actually INGEST a decent amount of solid food right now, and in the BLW approach, babies take awhile to get the hang of feeding themselves.

Expectation: I would wait until approximately six months to start solids.

Reality: Maelle’s on the light side, and at her four-month appointment her current weight caused her to cross two of the growth chart curves.  While her pediatrician wasn’t worried (and neither was I), she encouraged us to go ahead and start solids, especially because Maelle has had good head and neck control for awhile and has started to display an interest in our food.

Expectation: That Maelle’s bowel movements would take awhile to change after beginning solids, since the amounts she was taking in were relatively small.

Reality: After a couple days of no poops, she had a couple super sticky, super smelly diapers.  At that point, she’d only had oatmeal cereal with breastmilk. However, after a couple weeks of solids with increased variety, her poops are much more tolerable and formed.  We use cloth diapers, and I’ve added a flushable liner to make clean-up a breeze.

Expectation: That we would introduce a new food every 3-4 days to monitor for reactions.

Reality:  We’re doing one new food a day (per the advice of a pediatrician friend) and plan to up it to two foods a day until we get through most of the fruits and veggies.  Neither Andrew nor I are allergic to anything, and allergies don’t run in our families.  She’s been fine with peanut butter and strawberries so far, and most fruits and veggies are relatively low on the list of high-allergy foods.  It’s important to me that she have variety at meals, and it’s difficult to do that with only one new food a day.  I do plan to wait until closer to six months to introduce protein foods, like meat and dairy.

Maelle is eating solids 2-3 times a day, usually with us at mealtimes.  I try to have a fat source, like peanut butter or avocado, at least once a day.  It’s important that peanut butter make an appearance a regularly to help prevent an allergy, so we’ve started giving her Bambas (peanut butter puffs) every couple days.  For more on the early introduction of peanut butter, see this article.

It took a few days for her to get the hang of allowing the purees to go back into her mouth for swallowing.  Especially since she’s young (less than six months), she still has the tongue reflex that pushes food and other foreign objects out of her mouth.  She does really well now and ingests most of what we give her.  She even grabs for the spoon and helps bring it to her mouth.

She has had a generally good reaction to everything we’ve introduced, although I do think she picked up a texture difference in the avocados and strawberries I mashed vs. the store-bought purees.  I gave her both the avocado and strawberries alone and mixed with her cereal, and she seemed to accept the cereal version better.

In addition to Bambas, we’ve given her raw carrots and celery to gum, and some cooked carrots and potatoes.  She did have a gagging incident last night with the cooked veggies, so they’ll stay in the mesh teether (pictured below) for a little while longer I think.  I do plan to incorporate more table food/finger foods as she gets closer to six months and she has more control over what’s in her mouth. 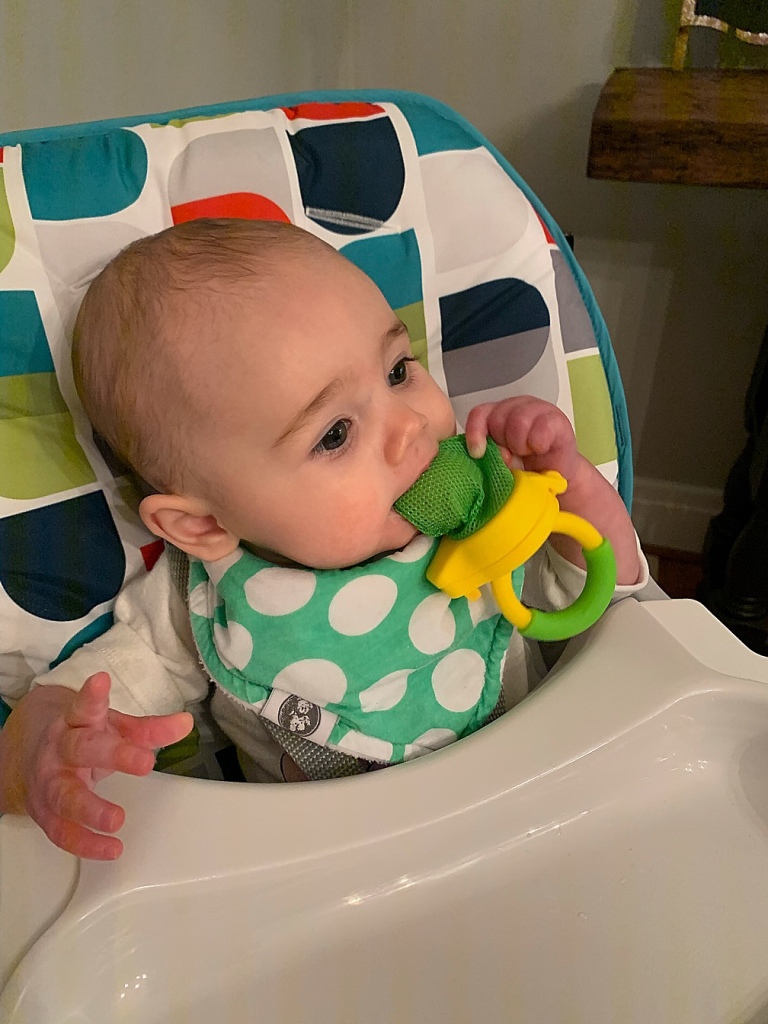 Maelle is excited to eat, and I’m shocked at how much she seems to consume at once!  I know babies can self-regulate based on fullness, but it still surprises me how much she eats in addition to continuing to nurse.

We’re doing sweet potatoes and raspberries today.  What was your child’s first food?