Our next stop on the trip was Paris–my favorite place on the planet (or at least tied for first with Emily’s house).

Andrew and I have been to Paris a few times so far, and he always asks, “What are we going to do that we haven’t done?”  Well, this year, we saw something completely new: La Grande Arche de la Défense.  We’d actually never really been to La Défense before, which is a business district outside of the city (seen in the second photo, below). The arch is really an incredible sight; I’m almost regretting that I talked Andrew out of spending an exorbitant amount of money for us to ride to the top (it actually re-opened THAT DAY).

We stayed in the same apartment as last year, less than half a mile from the Champ de Mars, which is where the Eiffel Tower is. Check out my view during my morning runs: 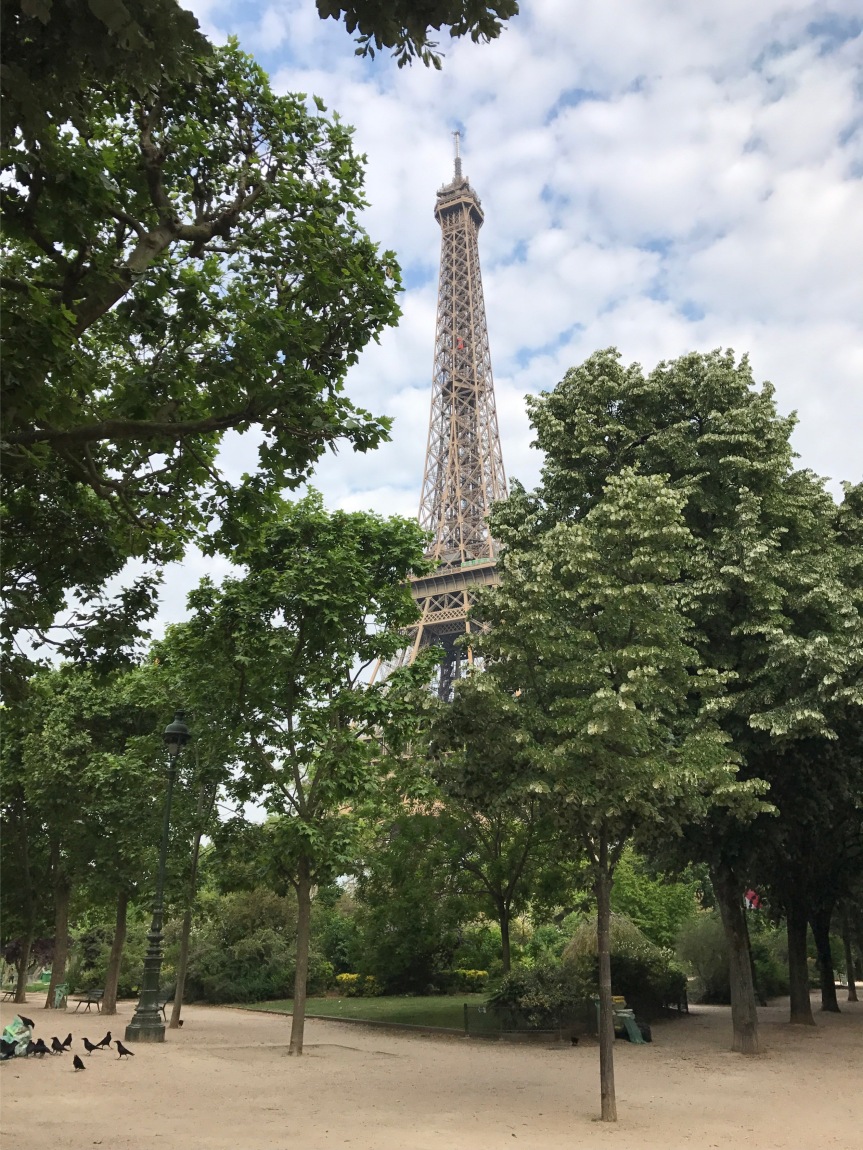 The park is more than a mile around, and running along the paths with the locals was definitely a highlight for me.

Another highlight: Grabbing drinks at one of our other favorite brasseries in Les Halles, called Le Compass. We had a lunch or dinner there last summer and really enjoyed the people-watching.  See that pharmacy across the way?  I popped in for some essentials–solo–another highlight.

Ah, Centre Pompidou, perhaps my favorite façade in all the world.  We were walking around the Marais one night and it appeared that something was going on (or about to go on) shortly.  So, we made like the Parisians got comfortable on the stones and waited.  And waited. 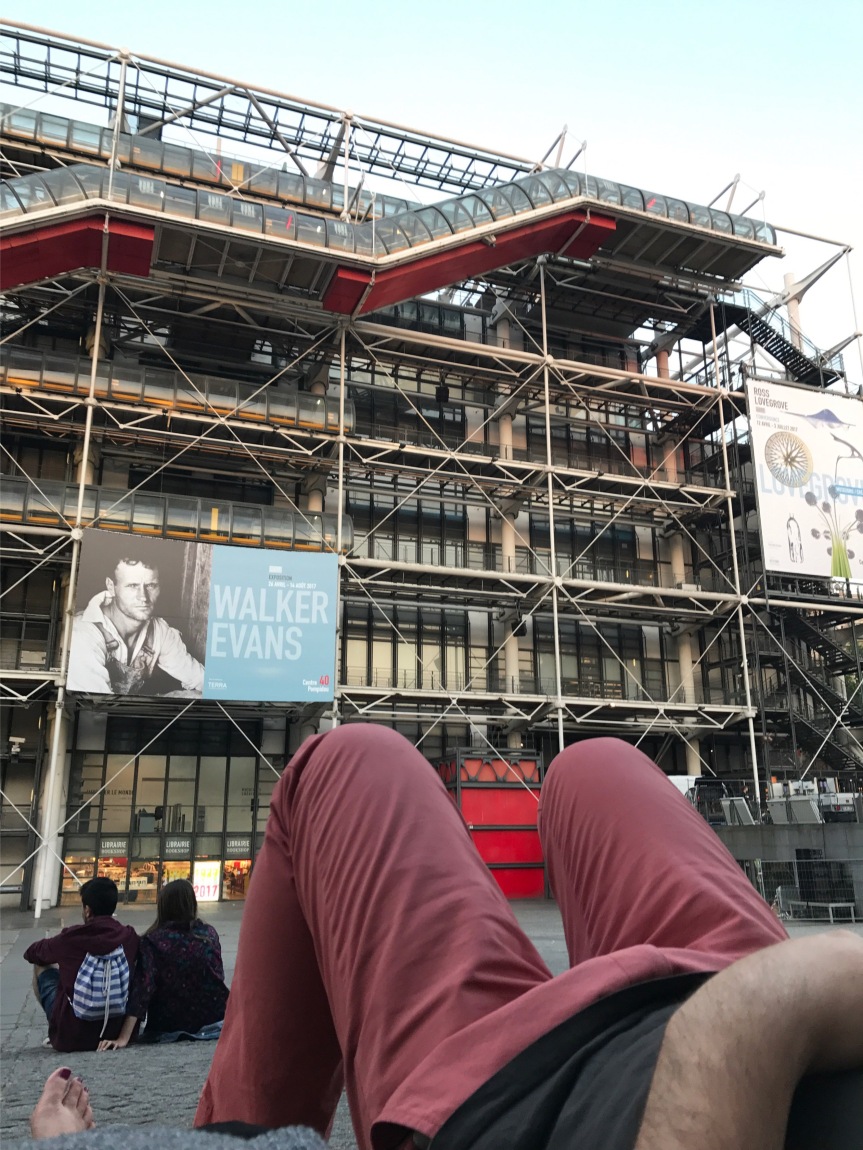 Finally, and I mean FINALLY, things started to happen.  Lights were set up.  Horns began blowing.  Smoke appeared.  It seemed like some sort of horn/acoustic/metal music and light show was about to start, but by that time it was almost midnight and we still had to catch the metro back, so we left after only a few minutes. 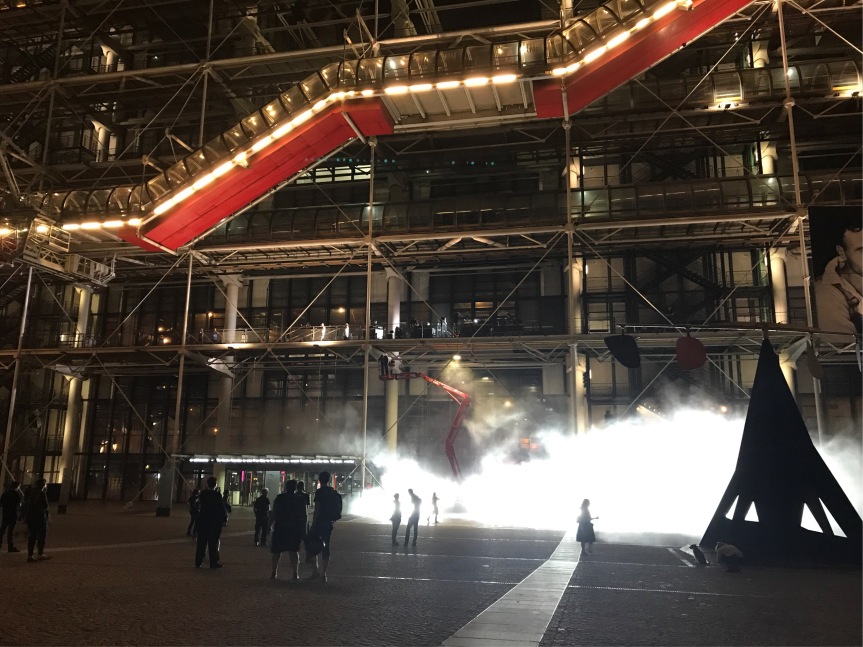 One of Andrew’s greatest finds was this little hidden ‘cafeteria’ of assorted food stands, similar to the Reading Terminal Market in Philadelphia.

We both opted for Moroccan food and could not have been happier.  So delicious!  The atmosphere was just perfect, filled with 90% locals on their lunch breaks and 10% adventurous tourists like us.

A trip to Paris wouldn’t be complete without a visit to our postcard shop in one of the covered galleries.  We’ve begun collecting a vintage postcard from each city/town/village in France we’ve visited, and the collection we’ve amassed is exceeding our designated wall space!  (Not hard to do when you travel like Andrew and I do, packing up and moving to a new place every couple days…exhausting but worth it.)

I caught Andrew mid-search; he must have been in there for an hour chatting with the owner and his son.

Andrew and I love to visit market streets to pick up food for a picnic lunch.  Rue Cler, below, has been our home-base now for two summers (our apartment was just a street away) and is one of the busiest and best in the entire city.  You can get everything you need (food and otherwise) from the specialty shops and the two small grocery stores that book-end the short street. 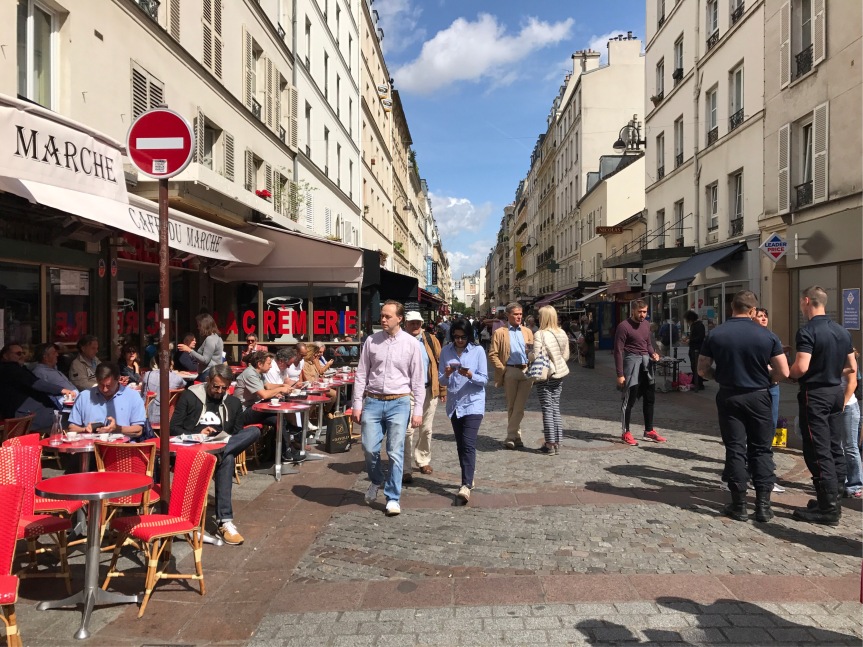 Another new experience–or new street, rather–was Rue Daguerre. Andrew and I have done market streets before, choosing just the right cheese, meat, veggie or wine for a picnic, but this one was new.  Unfortunately, we arrived just as things were winding down, but did pick up our picnic items before everything closed.  We headed across the way to a small park to enjoy our lunch! 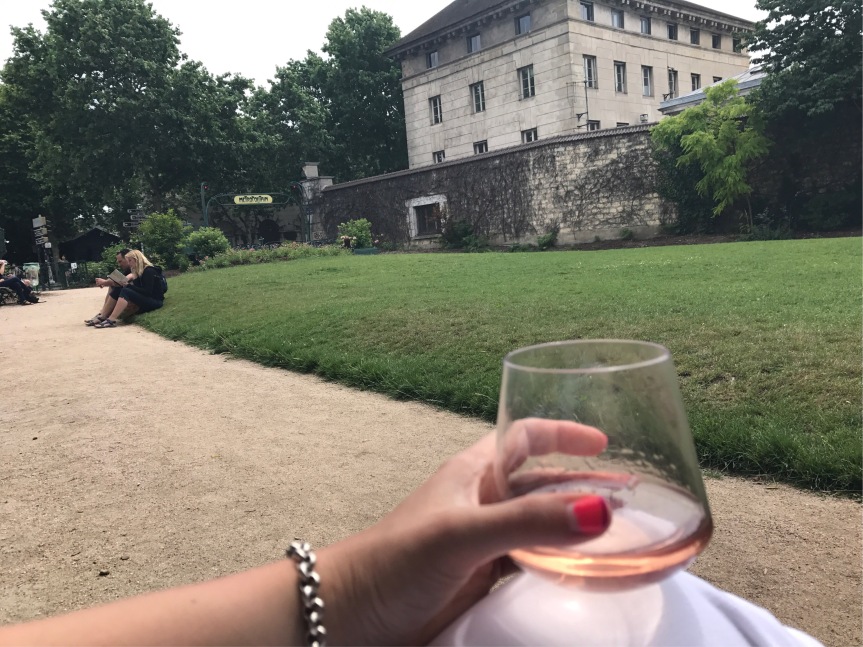 Our last new experience, and perhaps one of the most rewarding, was catching locals enjoying the beautiful weather at the Canal St Martin.  We spent an entire afternoon exploring the area along the canals, and were able to see the locks in action as boats paused for the water levels to equalize.  The area is full of boutique shops, cafés and small parks.  We stopped at a café outside a waterfront movie theater for a drink while thousands of Parisians played boule and picnicked along the banks of the canal in front of us. 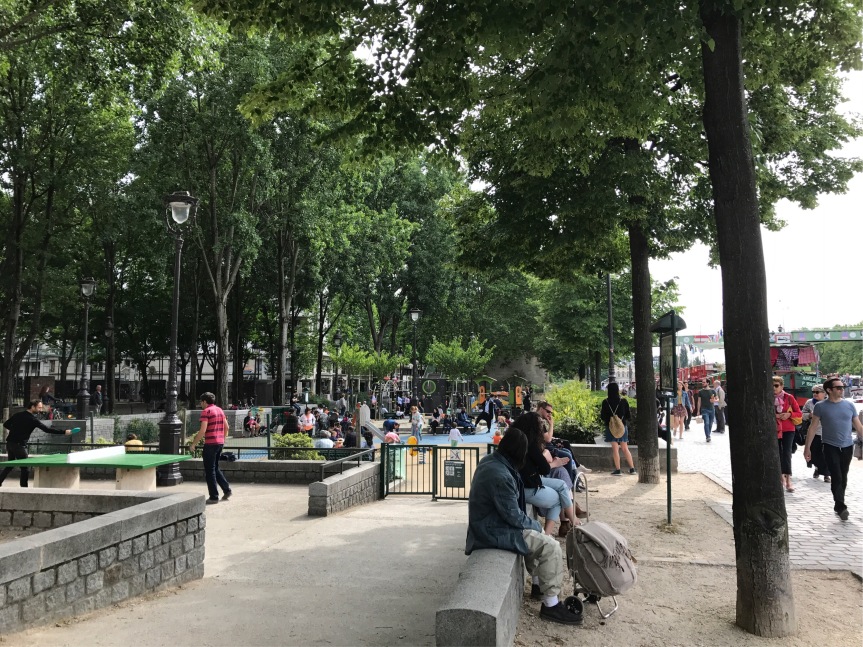 A highlight for me–no matter how many times I visit the city–is seeing the Eiffel Tower sparkle.  It’s completely cliché, but it truly is an amazing sight. Every night starting at 10 p.m., the Eiffel Tower sparkles for five minutes on the hour.  It’s worth seeing any chance you can get.  Andrew and I have seen it from the Place du Trocadero and from the Champ de Mars below, both of which are packed with tourists, and hawkers trying to sell selfie-sticks, Eiffel Tower key chains and other junk.  This year we walked around the park where the tower stands, watching the show (both the tower and the people!) before heading back to the apartment one last time.

It may have been Father’s Day (we love you, Andrew!), but the highlight of the weekend was seeing my high school friend @jimmy.cox82 when he was in town for the #thunderofniagara air show. It was a short but very sweet visit, and I hope we don’t let another 20 years 😳 go by without seeing each other. #blueangels #usnavyblueangels #flynavy #bestfriends
Loading Comments...
Comment
×
%d bloggers like this: