We awoke Easter Sunday in time to go to the early service at Redeemer Presbyterian Church on 83rd and Amsterdam.  Before we went on the trip, I’d messaged a friend from college who used to live in the city and is on staff with Campus Crusade for Christ for a recommendation for a church.  She recommended Redeemer and also mentioned that Cafe Lalo, the one featured in the movie ‘You’ve Got Mail’ was just down the street.  So glad I asked her.

So, we quickly grabbed bananas and coffees at the downstairs awful breakfast (which was packed even at 8 a.m.) and headed to the subway.

We had perfect timing and were blessed to hear a sermon by Dr. Tim Keller, who heads up the three-location Redeemer Church.  He was only preaching at the first service that morning, so I’m glad we were early birds. 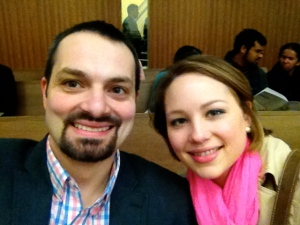 Notice the hot-pink scarf: an Easter gift (a.k.a. Italy trip gift) from Andrew.  So glad I brought my trench–it was the perfect light jacket for Sunday morning and I felt so classy 🙂

After the service, we walked about a half-block to Cafe Lalo and were seated right away: 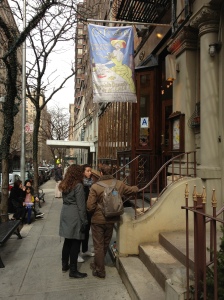 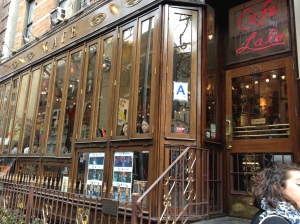 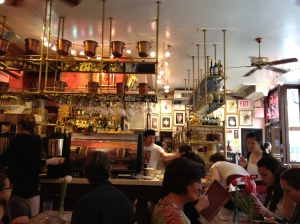 The photo really does not do it justice; it was decorated with French dancing posters and was bright and warm and welcoming.  My friend admitted to me that it had become a ‘date night’ spot for her husband and her, and I bet it would be ours’ if we lived in the city.  I think Andrew loved it more than I did! 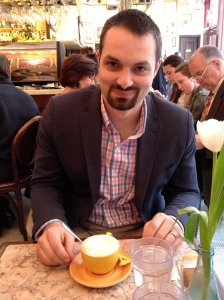 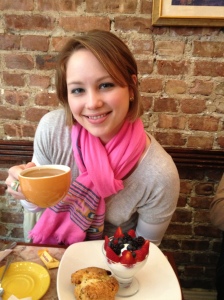 We ordered a belgian waffle with cinnamon whipped cream (Andrew) and the ‘Lalo Special,’ a berry-topped frozen-yogurt bowl with a scone of my choice (me) with coffees.  (Note: Andrew liked the cinnamon-whipped cream so much I whipped (haha! I’m so punny) some up this morning to top our pancakes. It’s fantastic–try it with your breakfast carb of choice next time!) 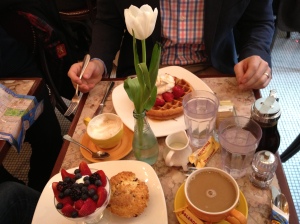 After breakfast and on our way back to the hotel, we had a bit of an adventure on the subway: we got separated!  I knew it was going to happen some time…  Andrew hopped off just as the doors were closing and I couldn’t follow him!  Thankfully, it wasn’t terribly difficult for me to grab another train back and in less than 10 minutes we were reunited.

Our last stop of the trip (sniff, sniff) was Bouchon Bakery: 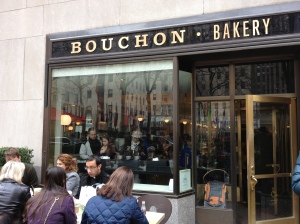 It’s one of Thomas Keller’s establishments and I’ve been to his Bouchon restaurant in Vegas before.  I just had to have a macaron. Or three. 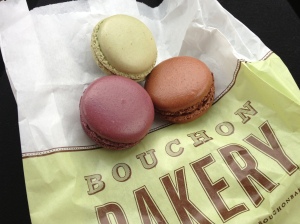 I chose a three mini-macarons so I could try different flavors: pistachio, chocolate and cassis (kinda like blackberry/raspberry) with a lemon filling). I got my treats to go and we rushed back to the hotel room with just enough time to give each other our Easter baskets: 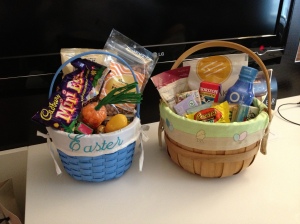 …and pack up before heading home.

For lunch, I ate a hot-cross bun from Bouchon (hey, it was Easter) with an apple and a cheese stick. 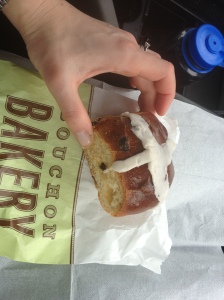 And that’s pretty much where the health-kick ended.  I started with my one Reese’s egg that Andrew got me: 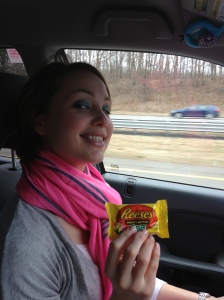 …and munched my way home on jelly beans, popcorn and all sorts of snacks. I blame a too-small lunch and boredom.

I did, however, exhibit great restraint and ate only ONE of my mini-macarons. 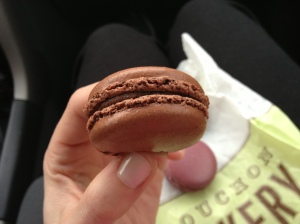 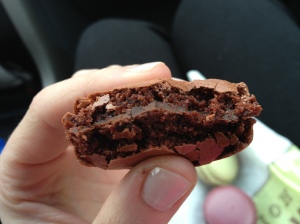 If you haven’t had a real macaron before, they are DIVINE.  Seriously.  Lightly crunchy on the outside, and the filling and the inside of each ‘sandwich piece’ is a bit fudgy…oh my.  However, I have no idea where to get one in all of Buffalo.  I’ve had them in Paris and New York City.  Up next on my life ‘to-do’ list: learn how to make macarons.  (Incidentally, those heaps of lightly browned coconut, sometimes dipped in chocolate, are called ‘coconut macarOOns.’)

We got in at about 6:30 on Sunday night and quickly unpacked the car and vacuumed (Andrew) while I ran into Tops for groceries.  However, we quickly found our favorite pizza place was closed (it was Easter Sunday), and just about everywhere else, too.  It was a refreshing reminder of the holiday, after being in NYC where it wasn’t even a blip on the radar.  We settled for one of the only places open–Jim’s Steak Out–and took our cheesesteaks to go and relaxed in front of the TV for the rest of the night.

It’s been a whirlwind week since then, and I still don’t feel like I’ve truly recovered.  In fact, Andrew had a cold all week and now I feel like I’m coming down with it…fantastic.  Why can’t vacations really be vacations?