Saturday morning we chose to eat the free breakfast at the hotel to save time (and money).  GIANT mistake; it was so crowded you could barely move to get your food, and we almost didn’t even find a seat.  It was truly an awful experience.

Terribly unsatisfied by breakfast, we grumbled our way to the Metropolitan Museum of Art, via the subway and a walk across Central Park:

I was surprised at how many photographs were being taken in all the museums; very few exhibits had posted “No Photography” signs.  And in the age of camera phones and such, I suppose anything goes. 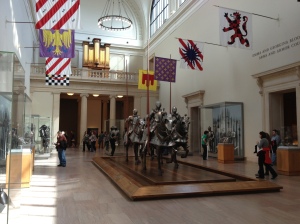 Andrew said his favorite experience was seeing the copy of the ‘Burghers of Calais,’ since we’ve seen the original ourselves! 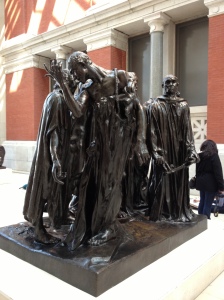 I loved some of the modern art:

Between the MoMA and the Met, we were able to see Edvard Munch’s ‘The Scream,’ Van Gogh’s ‘Starry Night’ and his self-portrait, as well as multiple works by well-known artists including: Rothko, Kandinsky, Pollack, Manet, Monet, and so many more.  I should have taken more photos.

Before we left the Met, we ran back upstairs to see this treasure: ‘Washington Crossing the Delaware.’ I’ll admit, spending much of my ‘growing up’ years outside Philadelphia, (not to mention living NEXT DOOR to the home Washington himself spent time in during the Revolution), I feel like I have an appreciation for things related to that time in history.

Yet again, we showed up at our lunch stop closer to dinnertime than ‘lunch time,’ and still had a bit of a wait at Lombardi’s Pizza, which claims to be America’s first pizzeria: 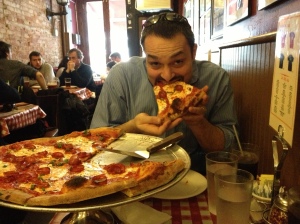 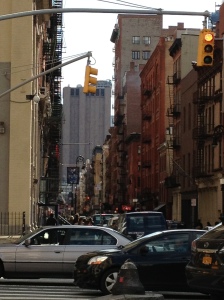 …until we found ourselves at the ORIGINAL Magnolia Bakery, at the corner of Bleecker and 11th Streets!  We waited in line and I was jazzed to get my photo taken under the awning. 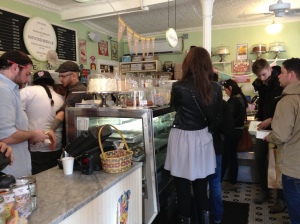 After having a treat at the bakery, we walked back to a subway to get home and I snapped this photo:

I was amazed that some of the subway stops were super clean and beautiful (like the one above), and others were smelly, trashy and gross.  Again, should have taken more photos.

We had wanted to go to a little cuban restaurant, Cafe Cortadito, in the East Village, but we couldn’t get reservations!  Bummer–guess we’ll just have to go there next time.

Instead, we tried Pig and Kaho, located just down the road, but the wait was too long.  Foiled again.  Thankfully, along the walk we’d passed Yunnan Kitchen and thought it looked interesting.  Can you tell Andrew was really feeling ethnic food??

Well, Yunnan turned out to be a gem of a place and I’ve already written two stellar reviews of it on Yelp and TripAdvisor. We were seated right away (although we noticed people waiting shortly thereafter), had awesome service and even better food.  My pictures of our dishes didn’t turn out that well, but we split four small plates of a fried rice, some pickled duck, a green papaya salad and a spicy chicken.  Everything was excellent.

After dinner we walked through Chinatown to the end of the Brooklyn Bridge.  It wasn’t too much of a walk, but we decided to head back via subway without crossing the bridge.  Another itinerary item for next time! 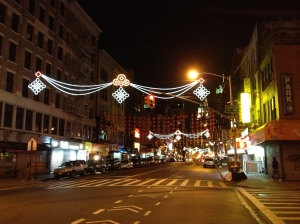 One thought on “NYC: Saturday”