Who knew I was such an oatmeal fan?  (Especially considering our current heat wave…)

I mean, I know I’ve gotten way more into oatmeal since I discovered Kath’s blog, but that’s not saying a whole lot since it was never more than an occasional winter breakfast for me before.

I found a recipe for Baked Oatmeal on Nourished Kitchen’s website and have been meaning to try it ever since.  It intrigued me that I could make oatmeal in bulk, essentially, and freeze ‘grab and go’ portions for busy mornings.

It calls for an overnight soak, so I prepped that the night before and whipped it up (along with eggs, grapefruit and cut-up Trader Joe’s Mango Chicken Sausage–which Andrew didn’t eat) for breakfast yesterday.  Sadly, I didn’t take any photos.

I did, however, take some (dark) ones this morning at O-dark-thirty when I was up having the leftovers before swimming. 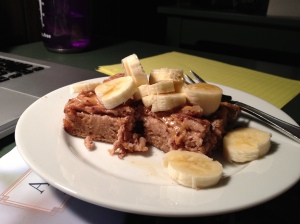 Here’s a side view–you can see the square shape.  I topped mine with a little peanut butter and half a banana for added energy in the pool.  A drizzle of maple syrup topped it all off.

You can see the hunks of dried apricot and cinnamon on top.

I made a lot of notes on this one.  Andrew liked it (his exact words were “I would eat this again” without being overly excited about it), so I definitely filed it away.

Other than that, it was great.  Relatively easy with fantastic results.  We were both able to have breakfast yesterday, breakfast today (well, Andrew will when he gets up) and three more servings went into the freezer.  (And that was only half the recipe.) Hurray!

Is it crazy that I’m making MORE oatmeal tomorrow?  I found “citrus-scented oatmeal with apricots and orange zest” in my Ancient Grains cookbook…