So, Andrew and I joined a small crowd of his co-workers this past weekend up in the Adirondacks for some skiing and, well, partying.  I’ll just say that Andrew and I weren’t quite the party animals that the rest of the crowd was, but we still had some fun.

We arrived Thursday night and socialized until the wee hours of the morning, and when Andrew and I couldn’t keep our eyes open any longer, we ducked into our room to turn in at 2 a.m.

I made breakfast Friday morning for the group–Foster’s Market’s Panama Pancakes and Ina’s Maple-Roasted bacon–before everyone headed out to ski.

I’m not a huge skier, by any stretch–I’ve been before and can ski decently–but it’s been years (like seven) since I’ve tackled the slopes, so I begged-off the ski trip in favor of some R&R in a quiet house.  ALONE.

I started my morning off with a six-mile run in the slush, followed by a hot shower and intense stretching (because in real life, who has time for more than a couple quick leg-pulls?) before lugging out my schoolwork.  Yes, I brought homework.  The crazy part?  I was sorta-kinda looking forward to actually DOING my homework without any distractions.

Well, two hours and a not-quite-finished Chem lab report later…  I gave up, admitted defeat and took my cooking magazines to bed for a nap.  I awoke to voices announcing the group’s return and went out to snack (pretty much the highlight of this trip…) and socialize before dinner.

Andrew skied and said he had a good time, and after finding out how foggy it was (not to mention the advanced skill level of the rest of our group), I’m glad I didn’t go.  I would have been left behind on the slopes and not enjoyed myself one bit–all while worrying about the homework I wasn’t doing.

The next day, while everyone else went back to the slopes for day number 2 of skiing, Andrew and I chose to stay back and do our own thing.  We googled (thank goodness for wi-fi!) until we found somewhere to go snowshoeing and bundled up.  It was a beautiful sunny day, very unlike the day before, and the snow was melting like crazy.

We drove just a few minutes to the Friends Lake Inn, which is an inn and wine-tasting room located at the base of some hilly trails intended for hiking, snowshoeing and cross-country skiing.  We had planned to rent snowshoes, but with the degree of melting, we thought we’d be fine without them, and we were. 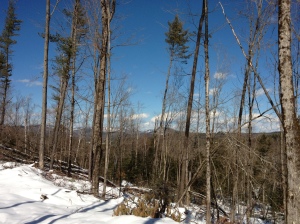 We hiked up and down and around, sometimes on and sometimes off the trail, for a little more than an hour before we decided it was probably about time to head back.  We’d seen “Cardiac Hill” on our map the whole time, but it seemed a little far away from the inn to aim for initially.  However, we found ourselves in the general vicinity of the hill (or what we thought was the hill!) at the end and decided to give it a try.  After ascending a gently curving incline and finding ourselves near a priory and face-to-face with Route 8, we figured we’d made a wrong turn.

It didn’t take much trudging in the opposite direction and DOWN a very steep hill to realize that we’d approached Cardiac Hill from the opposite direction (which is why we didn’t see it to begin with) and then gone up and around and off the trail.  Not to be outdone (and outsmarted!) and in the interest of a good calorie-burn (I wouldn’t say our hike up to that point was really that difficult), we trudged down Cardiac Hill, only to turn around and race up again (hey, why walk when you can run?).

After surmounting the hill, catching our breath and snapping this shot, we decided it really was time to head back.  Highlight of the trip: walking hand-in-hand, talking and even praying together the whole way back.  We joked that we pulled an “Emily and Dan” by hiking–our adventurous, outdoorsy friends who take-off on awesome weekend trips to places like Colorado and Arizona just to enjoy outdoor activities–and their ‘togetherness’ inspires me.

Another highlight of the trip: ice cream!  There is a chain of convenience stores in the Adirondacks called Stewart’s–you can buy their specialty sodas at the grocery store–and Andrew (for once it wasn’t me!) wanted some.  After sampling about five different flavors, I chose a sundae and devoured it the entire drive back to the house.

With dinner completely ruined, we returned to find everyone back and prepping snacks and munchies.  Why, oh why, am I tempted by bagged, preservative-laden, cheddar chex mix?  WWWWHHHHYYYYY?!?!

Our last night was filled with games (Guesstures, anyone?) and eating (I got my cook on and made brownies) before turning in.  The next morning Andrew, Bart and I were up and out first in order to arrive in time to pick Hadrian up from puppyy camp.

On the way home, we stopped in Syracuse for Dinosaur BBQ, a local favorite featured on Diners, Drive-Ins and Dives and one Bart knew about.

Andrew and I split a sampler–meat and fries mostly for him, sides mostly for me–and enjoyed every bite!  The place is known for their chicken (is was pretty darn good), but their ribs were truly amazing.  Definitely rivaled what I had in Texas…  Andrew made a good point–in less than three-weeks’ time, I’ve sampled BBQ at three well-known BBQ joints.  Am I a lucky girl or what?!

Coming home after a trip is always a rude awakening, filled with laundry and cleaning, and my chem quiz was seriously stressing me out.  (Thankfully, all my prep with the practice quizzes paid off–I got a 92!)  We ended our night at Wegmans, me filling up at the veggie bar and Andrew with a sub, as well as picking up groceries for the week.

All in all, our trip was fun but I don’t know that we would go again next year (apparently this group goes annually).  Andrew and I had a great time together and I enjoyed ‘getting away from it all.’

Speaking of getting away…  Spring break is TWO CLASSES away (!) and our next visit to Ohio (to see baby Aiden!) is three weeks away!

One thought on “my ‘not-skiing’ ski trip”