Here we are, at the Moog MId-Winter Bash.  I had SUCH FUN getting dressed up and socializing with Andrew’s co-workers.

I even got my hair done!  My hair hasn’t been long enough for an updo in AGES (if ever, really), so I was excited to get a french twist for the occasion.  Doesn’t it look awesome?  Like I actually HAVE hair? 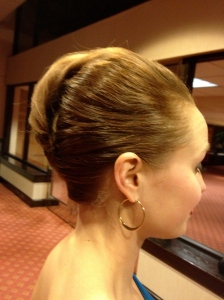 Can you believe just a few hours earlier it looked like this??!?!  She had to tease the heck out of it in order to get it to stay.

I don’t have any other photos of the bash, unfortunately.  It was really neat–TONS of food, multiple bands in different conference rooms of the hotel, as well as a couple comedy shows, too–but it was a little chaotic, too.  There were people everywhere; it was a wonder we ever ran into anyone Andrew knew.

Side note: Interestingly enough, we actually bumped into the company CEO!  I has interviewed him earlier in the week for a human interest piece for the Advertiser, so it was actually really neat to see him again and chat for a moment or two.  And introduce Andrew to him–certainly can’t hurt his career;)

We stayed the night at the hotel (it’s so nice to get away sometimes), so of course we were excited to come up with a place to eat breakfast the next morning.  The Lake Effect Diner is one we’d been meaning to try–it’s one of the places in Buffalo featured on Diners, Drive-Ins and Dives–and we weren’t disappointed.

It’s in a silver train car and it was standing-room only for a few minutes while we waiting for some spots at the counter.

“Guy Ate Here” emblazoned on the wall and a made-fresh OJ machine.

I don’t think we look too worse for the wear after our (relatively tame–we are old and married, after all) night of partying.  Note Andrew’s teal shirt and the teal stripes on my cardigan–we didn’t plan it, I swear, but I had to take a photo.

Here’s a shout-out to my dear friend, Emily, who gifted me with this purse hook for Christmas.  I don’t use it often (I prefer to use an empty chair next to me), but it was a life-saver this morning. 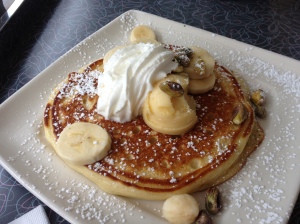 I was only somewhat indecisive this morning; as usual I wanted to try a little of everything, so I opted for an omelet and added a pancake.  I chose the banana and candied pistachio pancake (I mean, where can you get that combo?) and the Greek omelet.

It even had chicken souvlaki, the leftovers of which I used to top my salad tonight.  Home fries were pretty good, too.

The Lake Effect Diner is known for their smoked meats, so we had to try a couple varieties.  I chose the ham, since Andrew opted for the bacon. 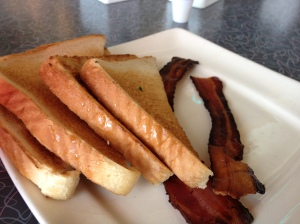 …as well as my toast and a side of bacon. 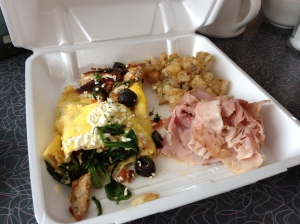 Like a good little healthy eater, I halved all my food (except the pancake) and loaded up a to-go box right way.  The box got even more full before I was finished–pancakes don’t keep well, so I opted to finish that instead of the rest.  It was SO MUCH FOOD.

Check out my two additional breakfasts, happily sitting in the fridge 🙂