Last night just might have been the most interesting New Years for all nine individuals in our party….  (Actually, maybe just eight of us; Jen–our 9-month-pregnant nurse friend who was a cop in a previous life had to work today so retired early–I am sure has seen crazier things between the two professions.)

But for the rest of us, let’s just say it will be memorable.

Our night started off normal enough; we arrived at Chez Diercks and were greeted with warm hugs and snacks.  We hadn’t put a plan together and with a group of nine this late in the game, I had no idea where we were going to go or what we were going to do.

Where in the world were were going to go for dinner without reservations?  After a little calling around, I got us a table at an asian place at The Greene for an hour later.

We’d done some pre-trip emailing and the feeling was that the girls wanted to do some dancing (with or without the guys), so we all got gussied-up and headed out.

We’d been to Cheo’s once before we moved and liked it; it’s great for a group.  The sushi-lovers were able to indulge, Jen went light with salad and lettuce wraps, I tried a coconut-curry duck and the non-ethnic-food-inclined at the table could still get General Tso’s or Sweet and Sour Chicken. 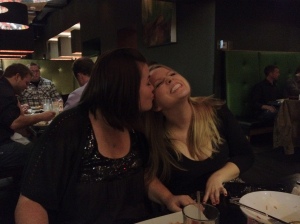 After some walking around and a quick taste at Yogurt Mountain, a yogurt place with the best toppings bar EVER, we piled into our cars and headed out to the Oregon District.

Our options were a bit limited; one of our party isn’t yet 21 and no one wanted to pay an arm and a leg to get in anywhere, so we headed to the first place on the list, Pulse.

Upon arrival, Emily did a bit of scouting and hopped back in the car with a thumbs-down.  No dancing and it looked shady. Well, this is Dayton (no offense) and everything downtown is a bit shady, so I knew our expectations might have been a bit high.

Nonetheless, Dan knew of a place in Centerville that might fit the bill, so off we went.  The Yellow Rose is a country line-dancing joint that switches to hip-hop later in the evening.  We had no idea what we were in for…

The parking lot set the scene: beat-up trucks with Stetson hats on the dash, and cowboys (of all ages) sauntering in told us we weren’t in Kansas anymore.  We entered, paid our cover, and found ourselves in the middle of the biggest country-western bar we’d ever seen.  The dance floor was flooded with girls in denim and cowboy boots, line-dancing away.  We scurried to the sidelines to wait out the twangy stuff.

Disclaimer: I actually like country music, but not knowing the line dances (on top of the fact that I’m not really a ‘dancer’ to begin with, was a bit intimidating.)  At least I fit right in–I’d chosen a dark denim shirt-dress and paired it with a black long-sleeved shirt and tights with tall boots.  All I’d had to do was trade my necklace for a hat and I’d have been golden.

Anyway, the country music wasn’t ending when we thought it might and some of our party were getting a bit antsy, so Emily and Dan headed out to the dance floor to fumble their way through some of the dances.  Not that anything they do would be fumbling; they’re both incredibly musically inclined, so at least they LOOK like they know what they’re doing.  I, on the other hand, took a quick sip of Andrew’s beer, put on my bravest face and marched myself out onto the dance floor to try my hand at it.  I attempted to two-step, all the while keeping an eye on anyone who knew what they were doing.  At least it kept us entertained until the music switched over…

…and boy, did it!  Actually, for a minute there we were a bit frightened; the hip-hop music started and they were line-dancing to it, too!  We found a spot near the TV and watched the ball drop and danced to Auld Lang Syne, which (apparently) signaled the change-over for the night and all of a sudden, the dance floor was mobbed and the music started thumping.

And this is where the story takes the interesting turn…  Let’s just say we’re a bunch of sheltered young adults and that dancing sure has changed!  Now I know why the preacher in Footloose made such a stink about dancing…  The country-line dancing Yellow Rose had turned into a full-fledged dance club with a pole!  The line dancers had vacated in a hurry to make room for a slightly, um, ‘diverse’ crowd.  There were barely-there dresses.  There were averted eyes.

We formed our own little group of well-behaved dancers and boogied for a few songs before calling it a night.  Hey, at least we all got a good laugh on the way out to our cars!

One thought on “one-of-a-kind new years…”