*Disclaimer:  I wrote this post awhile ago (as in, while we were still living in the hotel) and it’s been sitting in my drafts queue just waiting for an opportunity to be published.  Well, today is that day.  I so desperately want to blog, and I NEED to write my Eat This column for the co-op, but life and school and the house have just all been so crazy that I can’t let myself get sucked into an hour-long blogging session.  So, enjoy the fruits of my previous labor and hopefully I’ll be up for air a little more by this weekend–Emily and Dan are visiting!

This was supposed to just be a “before” and “after” shot.  Except that I didn’t think to actually blog about it until it was already “after.”  I mean, who cares about my recipe binder, anyway?

Well.  There is a bit of a story here.  OK, not really a story.  And I only intended to take a picture or two, but I was getting such great shots and having so much fun (yes, recipes really DO excite me that much) that I just kept clicking away.  And I hate to waste such great photography (for a dunce with an expensive camera), so here it is.  I had thought about calling it “a primer on recipe organization,” but really, it’s just gratuitous pictures of my new recipe binders (basically, I went from one to two).  I’ll offer a few tidbits along the way. 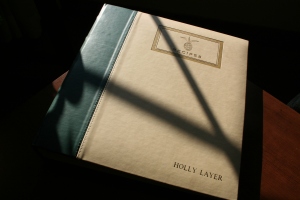 This is my new recipe binder.  My dear friend from college, Leslie, got it for me for my birthday this year.  It’s  from Williams-Sonoma and it has a pineapple and my name on it.  How perfect is that?  I brought it with me to the hotel thinking I would move all my recipes from my old binder to it in all my “free time.”  Isn’t it funny that we tend to be most productive and efficient when we have LESS time?  I had months before school started to undertake this project, yet I wait until I’m a month in.  Go figure.

Anyway, for the last couple years I’ve kept any recipe I loved or wanted to try (magazine clippings, transcribed recipes, etc…) in a binder in page protectors.  But, time and organization got away from me little by little, until it got almost too full and pages were thrown in willy-nilly.

So, now armed with TWO binders, I decided to make one my “go-to/tried-and-true” binder to hold all the recipes I’ve actually made and we loved.  The old binder became a storehouse of only those recipes still waiting to be tried.  I sorted and sorted and threw things away and was ruthless.  If we didn’t LOVE it, it went in the trash.

Here’s the NEW binder with our favorites:

Many of the recipes are magazine clippings (that’s my favorite way to have them–I love the color and pictures) and have my comments written on them.  I like to keep like items with like.  Above is a gazpacho salsa that was a huge hit at a July 4th party, as well as a tiny notepad paper with my neighbor’s salsa recipe on it.  She made it with balsamic vinegar and I thought it was very unique.

I even sometimes tear out additional info/pictures if I think it will add to the binder.  Above, a double-page spread on guac.  LOVE guac!

We have a photocopied page on how to make pretzels from Andrew’s kindergarten class.  He still uses it.

This sweet potato and scallions dish is one of Andrew’s favorites, which is stated up in the right hand corner…

I’ve typed up some recipes and added them as well.  I’m not one to keep recipes on the computer; I may be uber-organized and woman of the 21st century, but I like hard copies! 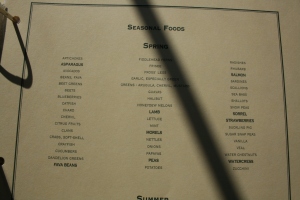 The binder Leslie got me even has neat additional pages with lists of seasonal produce, measuring equivalents and blank recipe cards on which to transcribe.  It even had a “journaling” section in case I wanted to write about what foods and wines I served at a particular gathering.

Below, the old binder:

It’s green and cute and I got it at Target awhile back.  It was bursting at the seams; now, it’s nicely filled with “to try” recipes.

Look what I found!  A 3×5 card on which I wrote a list of Andrew’s “favorites” at the time. Ina’s Chicken with 40 Garlic Cloves.  BLT pasta (which I don’t make any more because I think it’s gross.)  Mustard pork with pepper.  Veggie chicken chili.

Here’s one I want to try for next summer–guac with fruit.  Intriguing. 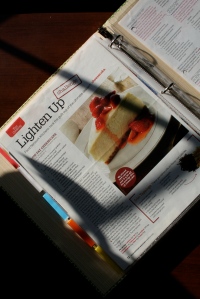 Lighten Up versions of mac and cheese and cheesecake.  I’m always game for stuff like that!  (BTW, since taking these photos, I actually tried the mac recipe on the left–TERRIBLE.)

I was hoping this dressing would be like what comes on your salad at Japanese Steakhouse places–the gingery orange dressing they have.  Let’s hope so!

I found this in a Martha Stewart Living magazine in late summer this year.  Zucchini bundt cake with candied zucchini pieces on top.  OMG.  So sad we’ve been in a hotel all summer…

And these.  It was a huge spread in Food Network years ago that featured candy bar cupcakes.  I had to keep them ALL.  (I have yet to make them, but just in case I want to, they are there.)

Cannot wait to actually USE my recipes again!

3 thoughts on “ode to my recipe binder(s)”