…pumpkin BEER that is!

Don’t judge.  What’s the difference between having it for lunch or for dinner?  Seriously.

With fall just around the corner, pumpkin beer is EVERYWHERE.  And I’m on a mission to try them ALL.  OK, well maybe not all–I am only one girl and the hubby won’t help me, which leaves me to drink a six-pack all by myself–it takes awhile.

For those who don’t know me well, I am a pumpkin-FREAK.  I love everything pumpkin and fall is my favorite season.  So, pumpkin beer is just one of the many things I get to enjoy this time of year.

Today is my free day (whoo hoo!) and perhaps the FIRST Tuesday since starting school that I haven’t also had to see houses/get an oil change/meet a friend for coffee, etc…  So, today really is free for me.

That doesn’t mean I slept in….but I did get some good studying in this morning, then hit the gym for some weights and 40 minutes of swimming.

I came home and made this:

Half a veggie/hummus/cheese sandwich with most of an apple (I gave Hadrian some) and ants on a log!  Who’s had ants on a log in the last…I don’t know, TEN years??  Anyone?  I had celery in the fridge and got inspired.  YUM.

As I said, I’m into pumpkin beer right now.  I really do want to find a go-to pumpkin beer/ale that I KNOW I like and can look forward to every fall.  I’ve tried Blue Moon’s variety and don’t really like it.  I know I like the Buffalo Bills Brewery’s version (their Orange Blossom Cream Ale is awesome, too!).  (Side note: Buffalo Bills Brewery is in CALIFORNIA.  Not sure why…can’t find anything online that explains their name.  Grrr.)  Last time we were at Wegmans, I decided to give Post Road’s brew a try, which is what I had today.  Don’t really like it so much.  It’s really “hoppy” and not pumpkin-y at all.

Next up:  Southern Tier’s Imperial Pumking. 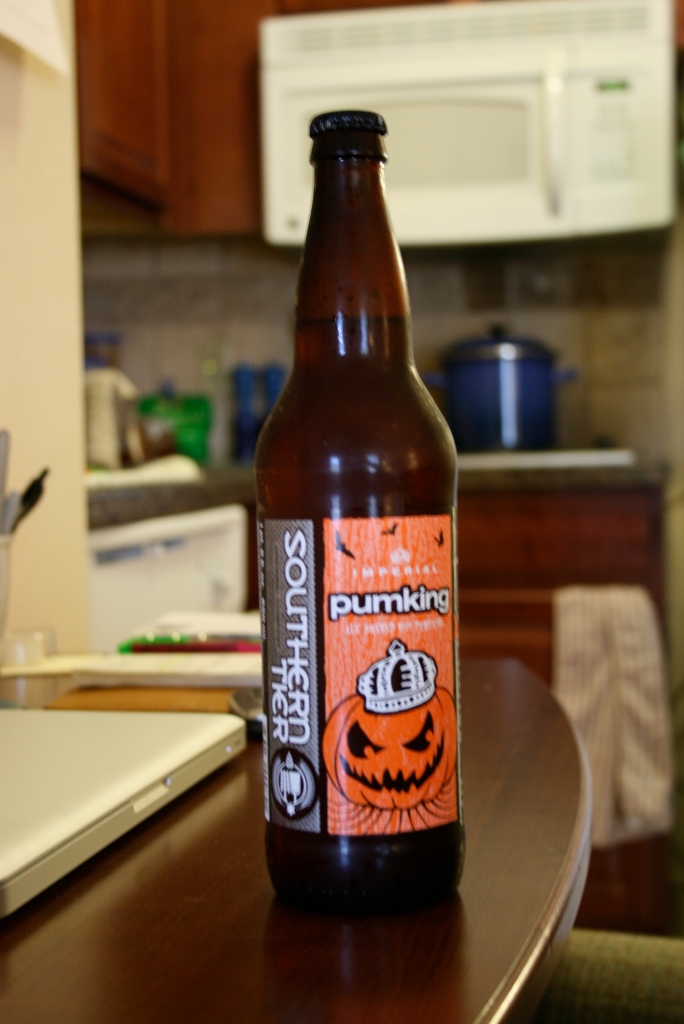 I first heard about it a week ago on Kath’s blog and was really intrigued by her positive comments.  It doesn’t hurt that Southern Tier is brewed here in New York–it’s at the very southwestern tip near Pennsylvania.  In fact, every time I see the “Souther Tier” label, it brings back fond memories of visiting Andrew while we were in college and I would drive along the Souther Tier Expressway on my trip from Philadelphia.  So anyway, I’ll be trying that in the near future, as soon as I can get through the last two Post Road bottles…

On another side note, Souther Tier has TONS of different brews and their website actually has a great page explaining them all.  You can get them all over, but our Wegmans has a “you-craft-your-own” six-pack option in which you get to choose from a bunch of loose bottles and mix and match.  They always have a bunch of Southern Tier varieties, so I’m looking forward to doing that next time to try out a couple different ones.

I think one of things I love about food is the HUNT.  As in, the hunt for my favorite beer, or favorite muffin recipe (remember when I made SIX different blueberry muffin recipes in one morning? Wish I’d been blogging then…) or favorite whatever.  I love having a go-to recipe or restaurant.  I love being a “regular.”  It’s my dream in life that Andrew and I will be “regulars” somewhere here in East Aurora, maybe a few different places.  Actually, the last time we were at Rick’s our waitress recognized us from the previous time we were there…does that count?  And I’ve made friends with the owner of Taste, so that’s a good step.

I digress, but that’s the beer talking.  Must let this pseudo-buzz pass before I start REAL work!