Literally, they did.  At exactly 11:53 p.m. last night, Heather and I sat down to enjoy the fruits (or rather, breads) of our labor.

Heather’s getting promoted to Captain this Friday (yay!) in a small ceremony here at the house in the morning, followed by brunch.  She really wanted to make Pioneer Woman’s cinnamon rolls, and since cinnamon rolls of any kind are a pretty drawn-out process, we decided to make them early and freeze them.

Thankfully, PW includes handy freezing instructions in her cookbook for busy times such as these.  Lord, help me get through this week!  And really, who has time to make cinnamon rolls, FROM SCRATCH, the morning of?  Even the most adept pastry baker (which I am NOT) has to wait for bread to rise.  And, I’m sorry, but I’ve done the whole refrigerate-overnight-and-rise-in-the-morning deal, and it’s never the same.

We didn’t get started until Maggie went to bed, and by the time we’d warmed and cooled the milk mixture, added yeast (not sure if we got the right amount…Heather forgot whether she put one scoop in or two!), flour and let it rise for an hour…it was pushing 10 p.m.   Part of this was my fault, as I’m trying to place an order for a “Scentsy” warmer and spent much of last night with my nose in about a million tiny scent pots trying to figure out what wax I want to buy!

Thankfully, I actually remembered to get the camera out.  I’m still trying to get used to “documenting” as a blogger.  All too often, I realize AFTER the fact that I should have brought my camera.  Rather, Andrew’s camera.  The one that’s really big and bulky… I’m asking for a new digital camera for my birthday–fingers crossed!

This is why I love Heather:

She makes me get a laugh out of life here and there.  (Disclaimer:  this photo is posed.  However, she really did toss the flour bowl on my head after HAND-SPRINKLING eight cups of flour into the larger bowl while I mixed.  This was a miscommunication on my part…)

Check out those arms!  (I had to…) I also love Heather because she really likes to take pictures.  This comes in handy for a blogger so that I can actually APPEAR in some of them every now and then.  Check out the silicone pastry mat, too–incredibly handy for dough, although this recipe calls for you to roll it out in such a wide rectangle that it kinda defeats the purpose…

Here we are at 11 p.m. and no cinnamon rolls have made it to the oven yet.  It’s going to be a long night.  Heather busted out the chips and dip (again)…  She is RUINING my diet!  Oh well, at least I’m having fun 🙂 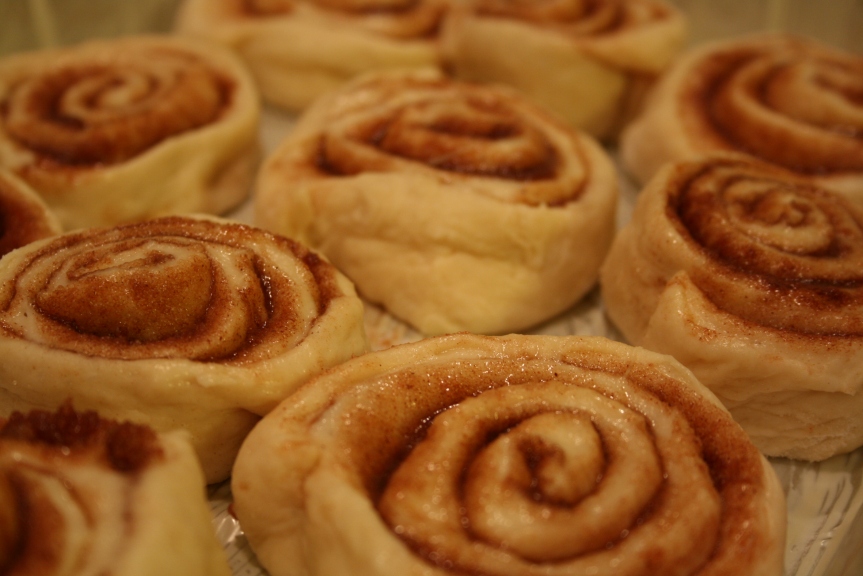 This could be called “Ooey, Gooey Goodness” by Heather A. Simone.  Such a great photo!

Frosting….yum!  I may have gone a bit heavy on the coffee and maple flavoring, but it’s still REALLY good.  I like that it’s not that bright white, sickly sweet icing that comes in those cans of cinnamon rolls you buy at the store.  PW also gives an orange variation in the book–definitely trying that next time.

At this point, we’re getting tired and goofy.  But still having fun!  I swear, in the month Heather’s been here, I think I’ve gotten the least amount of sleep in my life (including field training!), but it’s so worth it.

Loading cinnamon goodness into the oven.  Again, please take a moment to appreciate all my hard work these last few weeks. I’ve finally lost enough weight to show off the arm and shoulder muscles I earned in the pool all those years ago.  That, and my current lifting routine doesn’t hurt, either.  (Side note:  I’m planning a full “weight-loss” post once I reach my goal, which WAS only 4 pounds away but now might be more like 5 or 6 since Heather keeps pulling out the chips!)

Finally sitting down to enjoy!  Heather’s “before” face, above.  Her “after” face, below:

Now those are some well-earned calories!  I have to admit, we both thought the rolls themselves were a bit “bready.”  And we both swear the first time we had them, courtesy of Sara’s first time at house church, they were much “doughier.”  Does that make sense?  How can we make sure our bread comes out doughier next time?  Does anyone know?  Would really appreciate some help on this one…

…we spent the next few minutes giving him dirty looks (which didn’t phase him a bit) and shooing him away.  The poor guy…he’s always smelling such great stuff (he seemed really interested in all the Scentsy pots!) and he can see it but can’t quite have it.

I hated putting our freshly baked rolls directly into the freezer, but I’m SO GLAD we have them taken care of for Friday morning, and I’ll get to make a note in my cookbook about how they turned out from the freezer.

2 thoughts on “the cinnamon rolls come out at midnight”