With only weeks to go before I enter the 3rd trimester (!!!), this post is admittedly a little late.  I had no idea how much pregnancy causes time to speed up!  I can’t even fathom the thought that FIVE months have elapsed since we found out we were pregnant, and don’t even get me started on how I feel about having only about three months left before baby makes her appearance.  It gives whole new meaning to the phrase, ‘so much to do and so little time.’  Never in my life has my motivation to accomplish anything been so fickle; one minute I’m in a tizzy, ready to move dressers out of our bedroom in preparation for a wood-floor project, and the next I’m sitting on the couch having lost all interest in the endeavor.

But, despite my current 26-week status, neither the blog nor the pregnancy would be complete without at least a little bit here for posterity! END_OF_DOCUMENT_TOKEN_TO_BE_REPLACED

Yup, you read that right. And it’s not the first time I’ve made it; I got curious and used Kath’s recipe years ago and didn’t hate it.

I’ve had a can of sardines in the pantry for a little while now (our co-op sells them 2 for $4) and felt the need to break it open sooner rather than later.  While I could have simply pretending I was making tuna salad and mixed it with some celery, dill pickle, egg white and onion, I decided I’d break out some of my cookbooks to see if they had anything to say.

For Christmas, I received Run Fast. Eat Slow. from a girlfriend and it featured an ‘Omega Sardine Salad’ that sounded good. (It was slim pickins’; I’ll be honest, not many of my cookbooks have recipes that include sardines.)

So, I whipped up the salad with some homemade mayo (instead of the plain Greek yogurt) and served it in various ways: with crackers, on salad topped with crackers (below) and on a whole-wheat English muffin. 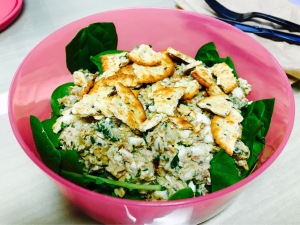 I’d like to challenge anyone who already eats canned salmon to try sardines.  The authors note in the book that sardines are sustainable and don’t have mercury (because they’re at the bottom of the food chain and don’t concentrate heavy metals). Sardines are high in protein, omega-3 fats, Vitamins B12 and D and calcium.  They only have a *slightly* more ‘pronounced’ flavor than tuna or salmon, and–in fact–I’d say it’s less fishy and more brine-y or salty.

So, give it a whirl!  I loved the mix-ins with this salad, which included mashed hardboiled eggs, parsley, celery and toasted walnuts and olives with a little bit of Dijon mustard.  It was salty and rich and paired really well with wheat crackers.