On Saturday, we walked over to Knox Farm for the first annual Borderland Music  and Arts Festival! 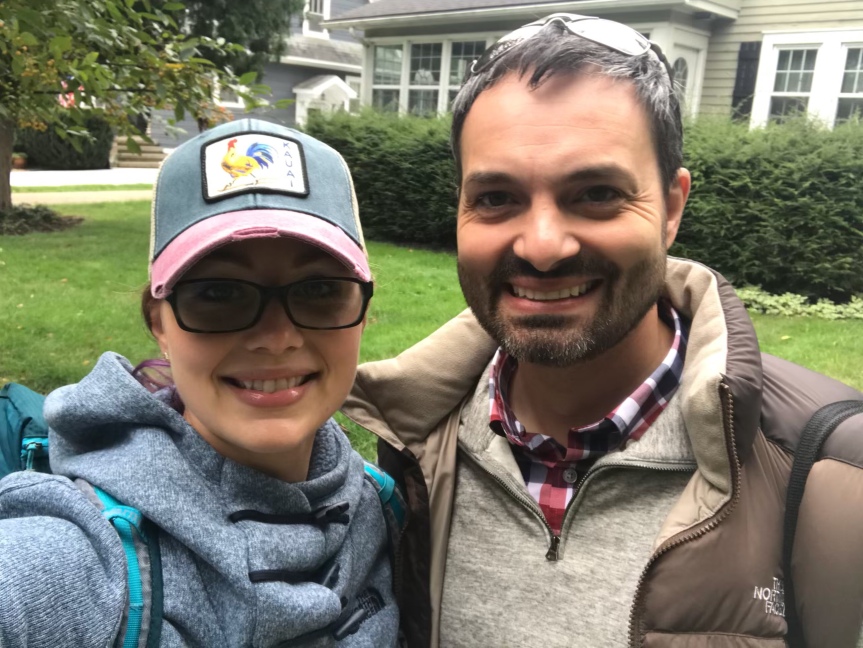 While Andrew and I aren’t really ‘music’ people, we thought the event sounded fun and that we should give it a try since it was local and the first time they were doing it.  I’m so glad we did!  It was so much fun and we’re already excited for next year.

We opted for one-day tickets, and chose Saturday because The Revivalists were headlining that night.  John Oats (of Hall and Oats) and the Good Road Band were on tap for Sunday.  I’m glad we only did one day; I one was plenty for us.

Doors opened at 11 am, and we arrived at about 12:30.  The temperature was supposed to be in the 50’s, so we dressed accordingly in layers.  We were so glad to be able to walk there–a festival in our own hometown!  I loved the entrance they set up off Knox Road. 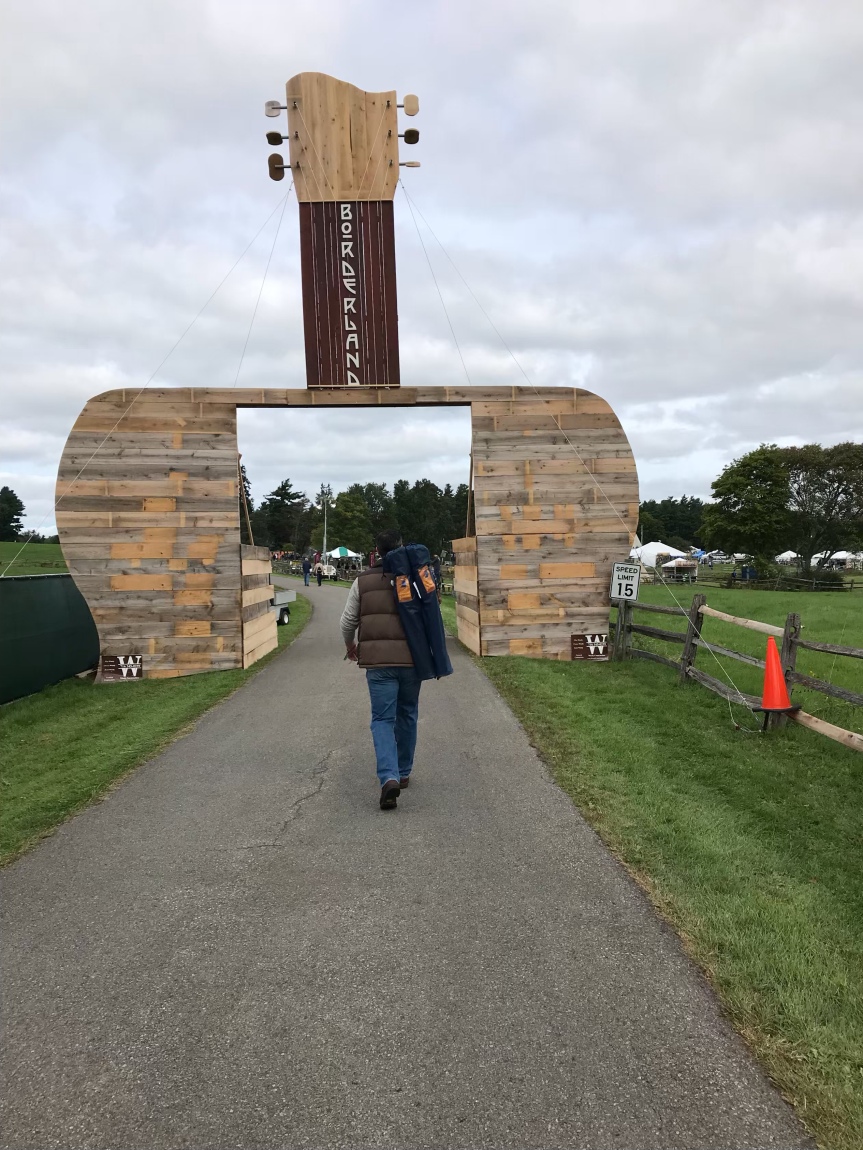 Three stages were set up, two large and one smaller one on the opposite side of the stables.  Acts were spaced about an hour apart, alternating between the stages, with bands on the half-hour on the smaller stage.  The bands were largely from New York and Canada, including Sister Sparrow and the Dirty Birds and the Sam Roberts Band. 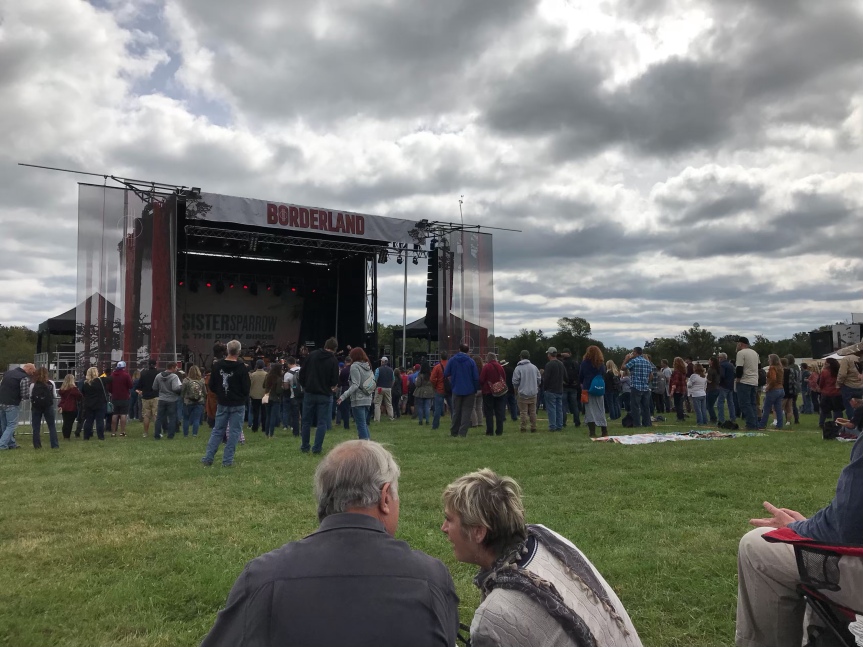 The food and craft beer could not be beat!  I got a souvenir cup (that got me $1 off beer!) and we started with BBQ pork bites topped with pickled onions and a side of homemade potato chips.  Other options included curry chicken salad, gourmet burgers and wood-fired pizza.  Beer, like the music, was all from local craft breweries, like 42 North, Ithaca Brewing Company, Big Ditch and Resurgence. I chose Big Ditch’s Cinnamon Apple Ale and it was delicious!

I loved that there was a ‘free water’ tent set up as well.  Festival goers were encouraged to bring empty water bottles to fill at the water taps, and I loved all the recycling options located at the trash cans.  The grounds were very clean the entire day. 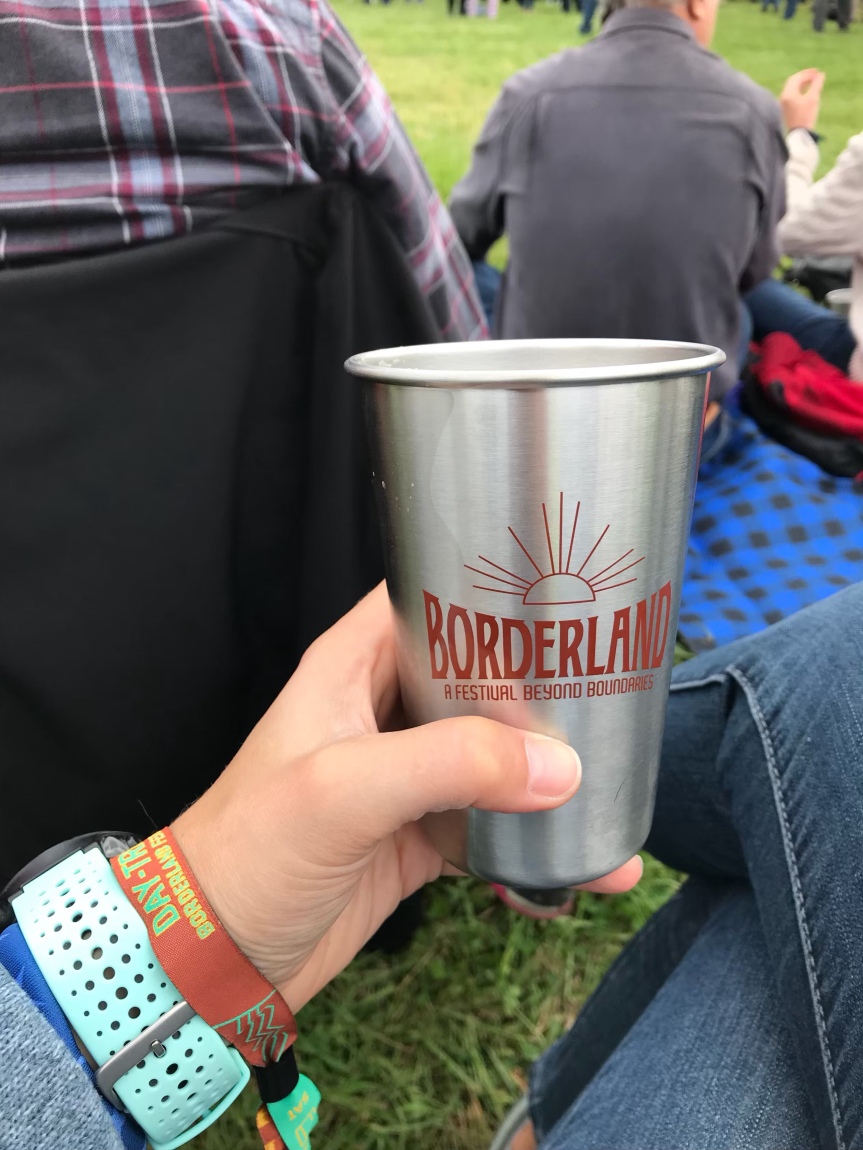 In addition to being able to catch music on each stage throughout the day, there were other things to see and do, too.  A small field housed a sheep-shearer, wooden bicycle-maker, a boat-maker, stained-glass designer and a Roycroft artisan doing some wood working.

The stables were set up with local artisans and vendors selling items like clothing and jewelry.   There were even a couple giant horses in there, too. 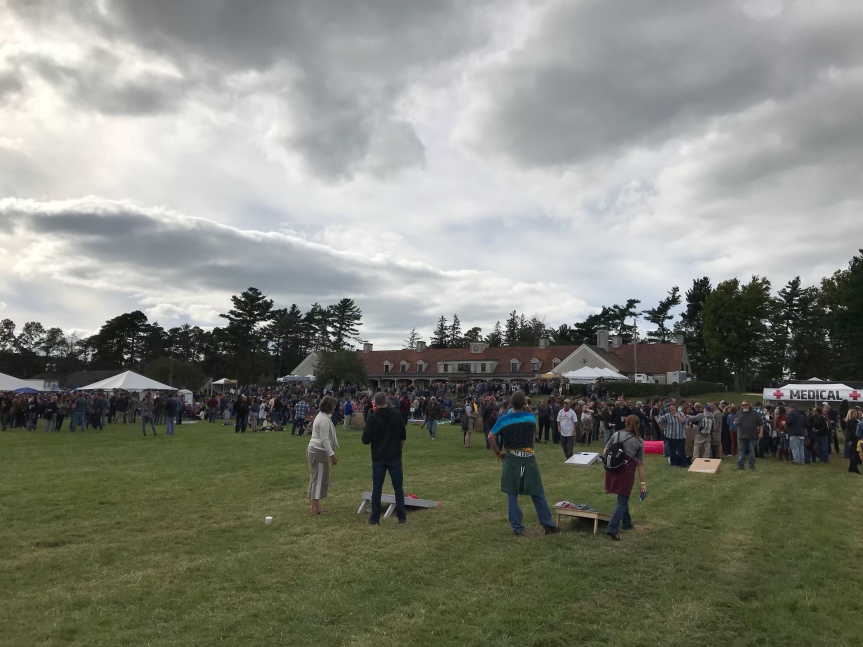 Crowds picked up as the day went on, as I’m sure not everyone wanted to be there the entire day.  I felt the porta-potty situation was satisfactory, and didn’t think the lines for food or beer were too long.  We did wait quite awhile for our wood-fired pizza, but that was our choice and so WORTH IT!

I loved that we were constantly either running into friends, or recognizing other East Aurorians.  This was such a hometown event, and I’m glad that so many people came out to support it on its inaugural weekend.

The sunset just before The Revivalists came on was stunning: 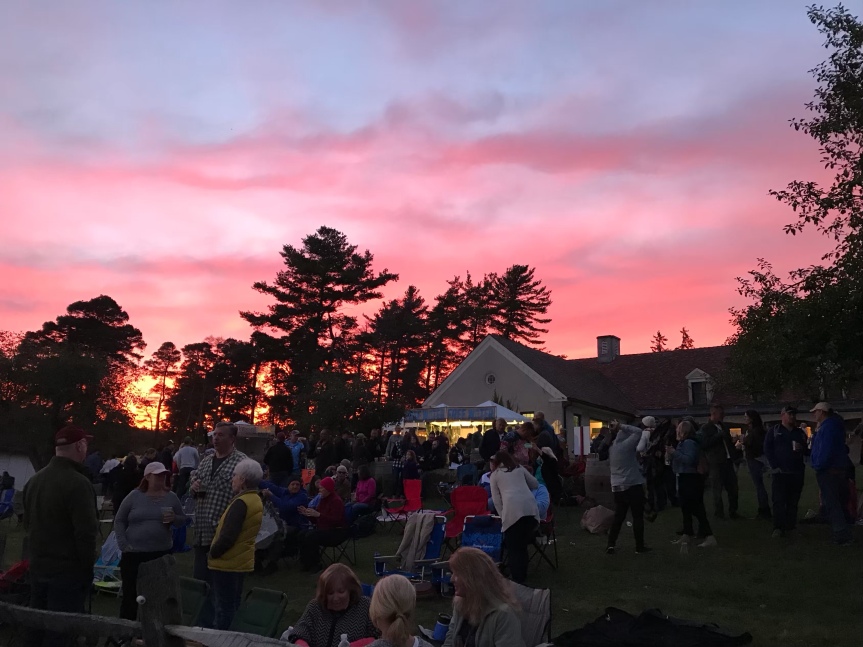 By 7:30 pm, the crowd stretched from the stage to the stables. 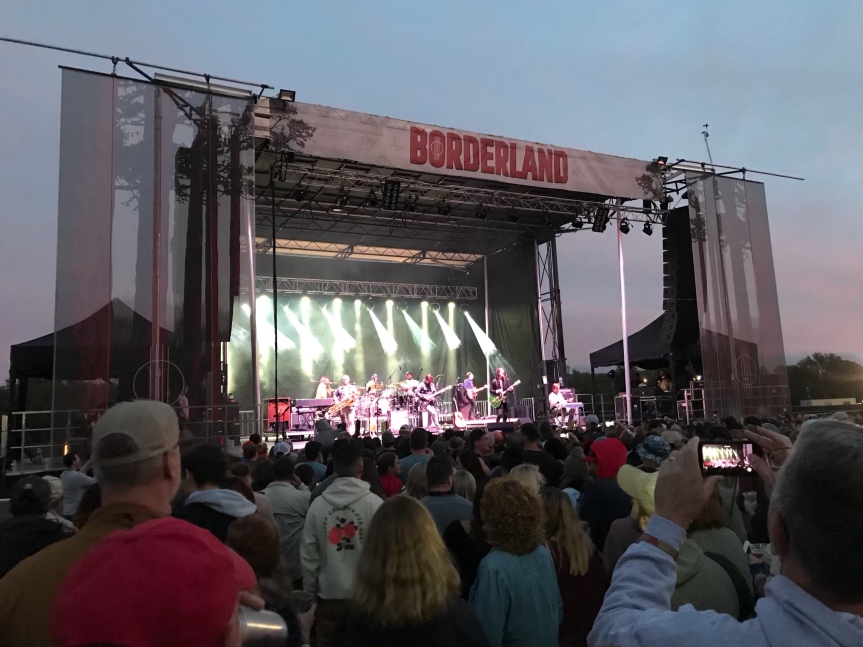 The Revivalists, famous for their song ‘Wish I Knew You When I Was Young,’ put on an excellent show.  That song always makes me smile, because it was one of the songs Stacy put on my iPod Shuffle for my marathon last year. 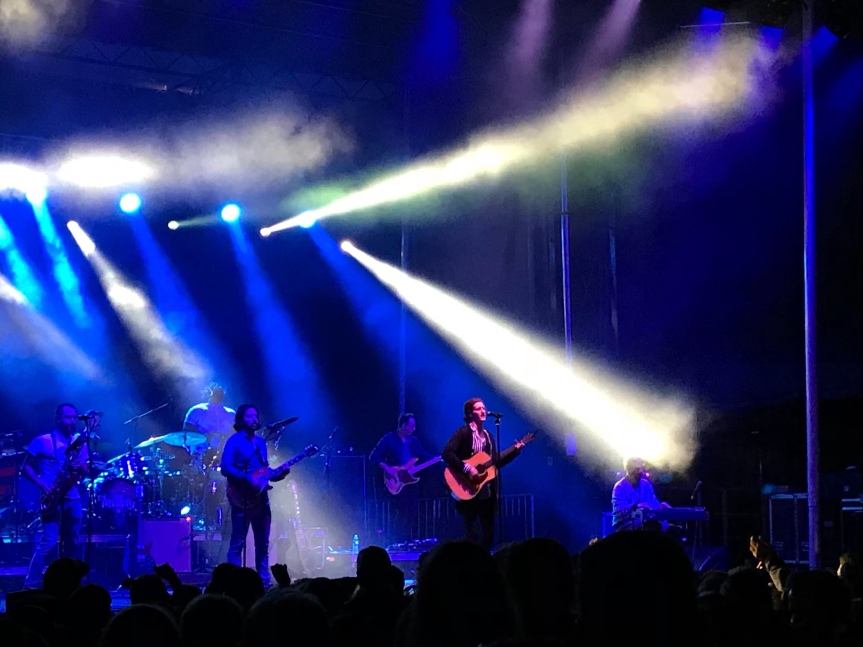 Andrew and I really enjoyed the show and were glad to be able to walk home at the end of the night, although at that point we were wishing we’d ridden our bikes over!  Can’t wait until next year!