Back in January, I accompanied my mom (a flight attendant for United) on a trip to Beijing, China.  Thankfully, I spent the 13-hour flight in First Class, where I was pampered every which way to Sunday by the other flight attendants and my mom.  Your seat folds into a bed, there is a multi-course dinner (to include an ice cream sundae), plenty of in-flight movies and even midnight snacks.  First is the way to go, people.  (But only if it’s Space A or INSANELY discounted; I don’t even want to know the price tag of a First Class ticket to China.)

The crew stays at a hotel about 45 minutes from the airport, and upon the arrival of the bus, we were all greeted by a small army of Chinese ‘businessmen and women,’ who were ready to take reservations for sightseeing excursions, hair and nail appointments, etc.  It was quite the show.

After settling into our room, we joined another crew member for the hotel’s ‘members-only’ complimentary dinner buffet and drinks.  Mom had made a hair appointment for that evening at a salon near the hotel, and I joined for a mani/pedi, during which I fell asleep!  (I hadn’t slept much on the plane, despite my comfy seat-bed!)  We stumbled back to the room in an over-tired stupor and went to bed.

And then I woke up at 5 am (5 pm US time the night before) and texted with Andrew for a bit.

The next day we hired a car to take us to the Great Wall, which is about an hour outside the city.  Unfortunately, I wasn’t visiting in the most beautiful of seasons (or weather–it was freezing!) but the view was still stunning.  I feel like I barely saw any of the wall itself, and there is just no way to truly appreciate its size.  I was surprised by how NOT LEVEL the wall is; I had anticipated steps to get UP to the wall and then a relatively even, bridge-like span for the length of it.  Oh no.  It’s up and down, up and down all over the place.  Some sets of stairs are almost vertical!  Apparently there is a marathon on the Great Wall.  No thank-you. 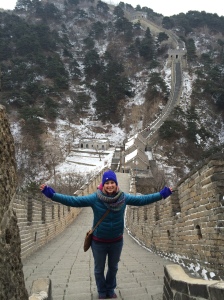 On the way back from the Great Wall, we checked out a Cloisonné shop and picked up some small ornaments as souvenirs.  We also drove by the Olympic Village (2008 Summer Games).

We had one authentic Chinese meal (mom always brings her own food to eat in her room, so this was out of the ordinary for her–it sounds crazy to bring food across the globe, but don’t you pack a lunch when you go to work, too?).  I ordered cashew chicken and a Coke at the Brown Door, which is a crew favorite hole-in-the-wall restaurant across the street from the Pearl Market.

The Pearl Market, which does sell pearls but not exclusively, is chock-full of just about every knock-off item (as well as authentic) you can imagine.  It’s kind of like an indoor flea market filled with vendors selling everything from (really good) fake purses, shoes and electronic to real furs and Chinese trinkets.  I had a great time picking out (real) pearls for myself and as gifts, as well as some other souvenirs to bring back.

Mom and I also attended a Chinese acrobatic show, which was incredible.  The venue was small and seemed to cater to tourists, but the theatrics and performers were absolutely incredible.  Check out the KID below doing a one-handed hand-stand atop all those chairs!

We spent the morning of our final day at the gym and doing some last-minute shopping and take-out Thai grabbing (for the ride home) before heading to the airport.

Perhaps the most exciting part of my trip was the way home, or my ‘almost NOT coming home’ as it almost way.  SUPER LONG STORY short: In China, Space Available travelers don’t go to the gate to wait; instead they stay at the ticket counter to receive their boarding passes.  We knew the flight was going to be pretty full, but still figured I’d get on.  I waited and waited, the ticket counter closed, I started to panic… (tears may have been welling up in my eyes) and all of a sudden I got a text from an unfamiliar number saying there was a ticket waiting for me at another counter.  Praise God!  However, I had only 30 minutes to get the ticket, race through border control AND security (where I had to flag down some employees and beg them to rush me through) and literally RUN through the terminal to get to the plane.  Let’s just say God orchestrated some minor miracles to get me on that plane, especially since that was the exact day that Washington, D.C. got hit with a snowstorm and all the flights after ours from Beijing were delayed for days.  I tell you what–I’m super blessed to be able to travel like this on my mom’s passes, but the uncertainty of it all stresses me out.  I don’t think I recovered from that adventure through the Beijing airport until we landed at Dulles…24 hours later.  (Technically we spent 12 in the air, but the time change basically has you departing China and arriving on the East coast at the same time–crazy!)