Abigail (and I, I suppose) hosted Carolyn’s lingerie shower yesterday.  Obviously (and somewhat unfortunately), I won’t be posting ALL the good photos from the par-tay since there may have been some “unmentionables” laying around…lingerie and otherwise.

(We even took a great group photo…while standing under all of Carolyn’s gifts that were currently hanging up on display.  Photo fail.)

Here’s the bride, with her sparkling strawberry spritzer and personalized sash:

If you can’t read it, it says “Future Mrs. Tatlow.”

But, the stars of the show were really these babies: 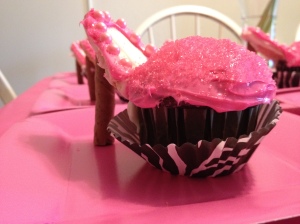 Andrew’s mom found out about them on one of her morning shows and they’re featured in this cupcake book.  Abigail and I (well, mostly me–the perfectionist in me took over, I think) made chocolate and vanilla cupcakes and assembled them for the shower.  Honestly, not all that hard to do, but getting them to stand up straight was just a bit tricky.  Totally worth the effort.

And, Abigail wanted to re-create something she found on Pinterest: 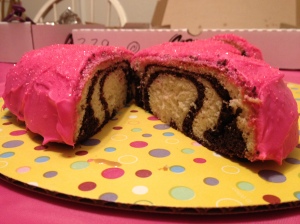 A zebra-striped cake!  She and I were both flying a bit blind the other day in my kitchen–due to a lack of directions and the extreme heat of baking on a hot day–but I’d say we succeeded.

The adorable host, doing what she does best:

And can ya tell the girl likes pink?!  Really, they both do.  We’re all already at a loss wondering what Abigail will do for her (eventual) wedding since between Carolyn as the bride and Abigail as her maid of honor, there is pink EVERYWHERE.

I wonder if Abigail has seen Steel Magnolias…(Check out the first entry under ‘Dialogue.’)

3 thoughts on “carolyn’s lingerie shower (a.k.a. the cupcake post)”

We’ve officially begun our journey to become a 46-r family! Hiked Cascade and Porter today and it was incredible…incredibly hard, incredibly beautiful, incredibly fulfilling. It may take us a decade to do them all, but it’s a worthy endeavor. I’m looking forward to spending more time together as a family here in the Adirondacks. #hiking #adks #adirondacks #cascademtn #portermtn #lakeplacid
Loading Comments...
%d bloggers like this: