I know, I’ve been slacking.

Well, maybe with the blog, but everything else just seems to find its way into my already packed schedule.  In addition to the massive amounts of chemistry studying that has been going on for the past week or so (and will continue until 10:59 Monday morning), I’ve been able to fit in a batch of yogurt, Mother’s Day cards/gifts/trips to the post office, multiple hairball clean-ups (eeewww) and some Big Bang-watching.  Thank you, Andrew, for doing my dishes and folding laundry.  I know I whine and complain and can be a bit of a perfectionist; thank you for being patient.

It will all be over after by 1 p.m. Monday–hurray!  I can already taste the margarita I’m ordering afterward…

Anyway, here’s something of a re-cap:

1. Starbucks has had half-price fraps since last Friday, and I didn’t get one until Tuesday, which I think showed great restraint.  The kicker?  I tried their new ‘mocha cookie crumble’ flavor and I was so not that impressed.  Oh well, guess that’s what I get for obsessing over it.  I even brought some of my own sweet potato tortilla chips for snacking along with the drink (I love salty with chocolate!), and they are the same kind you can BUY at Starbucks.  Ha!  Bonus: I’ve been looking for one of their ‘city/state’ mugs that either said ‘Buffalo’ or ‘New York’ that I liked–loved this green one featuring the Statue of Liberty and the NYC skyline.  Would love to find one that’s more local to Western NY, but until then, this will have to do. 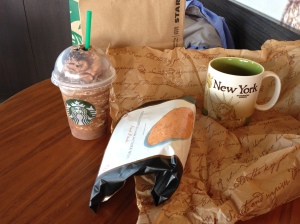 Side note: I’ve visited more coffee shops in the past week studying for the final than I care to admit.  However, I have a post going on my coffee preferences, so I suppose I could chalk them all up to research…

2. We recently received a giant box in the mail–it contained FOUR bags of Julio’s tortilla chips that Andrew mailed back from Texas. He even included a giant bottle of their seasoning blend–think he’s trying to tell me something?? 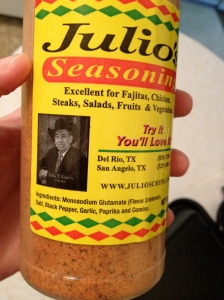 Please note the first ingredient is MSG…  Really?  Like I’m really going to feel good about shaking THAT all over my organic sweet potato fries…  I swear, you guys, it’s like I’m sleeping with the enemy, sometimes.

3.  I made Graeter’s Black Raspberry Chip ice cream from Pioneer Woman’s new cookbook awhile ago, and I still have a little in the freezer.  Here are a couple photos: 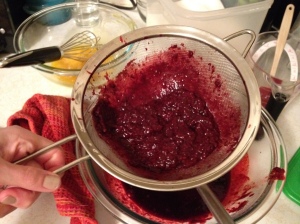 All the blackberries I used turned into this leftover pulp–what a waste!  I tried it, just out of curiosity.  Big mistake–all it needed was cobbler on top with some vanilla ice cream!  I had to stop myself after two spoonfuls. 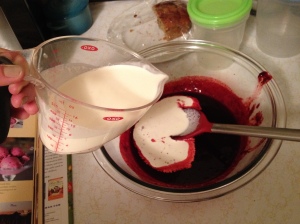 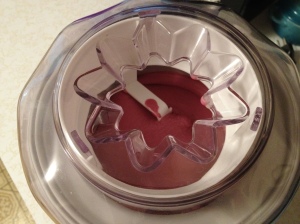 While the ice cream flavor was pretty spot-on, the chocolate I put in left something to be desired….  Instead of melting INSTANTLY in your mouth like real Graeter’s, these chunks of chocolate were crunchy and almost flavorless…almost no melting whatsoever.  At first, I thought it was the kind of chocolate I used: bittersweet vs. semi-sweet, or milk vs. dark.  However, upon further research into their methods (yes, I googled for their ingredients), I realized it’s all about the melting point and temperature…!  Duh, Holly, did you not just learn about this in Chemistry?  Basically, because ice cream is frozen, there is no way the chocolate can ‘melt in your mouth’ very quickly, unless you change the chocolate itself.  Graater’s actually adds oil to their premium chocolate to lower the melting point…  Now, all I need is their ratio of chocolate to oil…

4. So there is this long piece of carpet scrap we keep near the front door to help minimize mess on the carpet from coming in and out the door.  Obviously, it’s not nailed down or anything, so EVERY TIME Hadrian gets in one of his “zoomies” moods, he kicks it up into a wad under the dining room table.  Heck, even just normal walking moves the thing around.  THIS. MAKES. ME. INSANE.  I must bend over 900 times a day to fix the thing.  Yet another reason our forever home will not have carpet.

5. I ate sardines the other day for the first time!  Yes, I said sardines.  Honestly, they taste just like chicken.  Ha!  No, they don’t…but they do taste just like tuna.  Kath made a video of herself making a sardine salad and I was intrigued.  I bought a can of them last time we were in Ohio at Trader Joe’s and finally gave them a whirl.  Not bad at all!  Seriously, just like tuna.  I used her basic recipe and added some relish for a little more moisture.

6. Emily and I are plowing through Made to Crave and loving every moment!  We both agree that these last couple weeks have been really neat and there just seems to be so much ‘synergy’ going on with everything we’re learning.  For example, the beginning of the study focused more on simple principles of emotional eating, whereas now we’re moving into self-control (which was my first major break-through) and obedience to God.  The other night, I had a little bowl of ice cream (small, self-controlled and completely permissible for me), but afterward I realized I had eaten it ‘just because I wanted it.’  A perfect example of giving in and meeting a need–even with something permissible–when I should have been strong.

And another example: yesterday, Andrew and I ate a late lunch, so we didn’t want dinner before going to see The Avengers with the Layers.  It was about 5:45 p.m. and I’d just gotten a 100% on my final Chem quiz and was craving a walk and some fresh air, so we decided to walk to Vincenzo’s to get some water ice with our Groupon.  Anyway (I have a point here, I promise), we indulged a little in some liquid sugar (smalls!) before the movie, but passed on popcorn at the theater, which was easy since the line was long and we were already late.  However, by the time the movie ended we were both a bit hungry and Andrew suggested Kone King.  Now, I tell you what, I LOVE Kone King–their custard is just wonderful!  But you know what my first thought was:  “I’ve already had my dessert for today–I don’t need any more.”  VICTORY!!!  Despite it being 9 p.m., I felt I needed some ‘real food,’ so we opted for subs, where I chose a turkey on wheat.  VICTORY!

7.  My friend, Regina, took me to the local Yogen Fruz here at the mall.  Big mistake; it’s just another thing to crave.  At least it’s (pseudo) healthy, right? 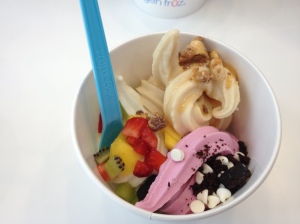 8. I’ve come to the conclusion that Hadrian and I are on some sort of weird circadian rhythm…  Nine times out of ten, I wake up–moments before my alarm–only to hear him start getting up (his collar jingling, a familiar whine/yawn and stretch from the living room, followed by the clacking of his nails on our wood bedroom floor), also moments before my alarm… As long as I can switch him from 5 a.m. to 6 a.m. while I’m on summer break, we’ll be alright.

9.  Speaking of Hadrian…  I’m the worst dog-mom EVER.  I went out on a study break tonight to grab a Starbucks and run a few errands, one of which being to buy dog food–he’s dangerously low.  Well, I was apparently more concerned with getting to Ulta before they closed on Sunday than PetSmart…  Between that preoccupation and the onset of a sudden “shopping mood”  (probably more like procrastination, in this case), needless to say, I arrived to PetSmart too late.  Reason #536 that we don’t have (real) children yet.

Guess I’m going in the morning…  (Which really just means an excuse to get Starbucks before school, but who’s asking??)

4 thoughts on “what’s new around here”