For awhile now, I’ve been hearing a lot on the radio and from other people about what a mild winter it’s been so far.  And it really has been–we’ve barely had any snow and we’ve had a few upper-40’s days–which has made me a bit sad.

Well, I am sad no more!  Pretty much since my return home from Ohio last week, it’s been pretty white around here.

I think we’re in the “constant snow” part of winter here…  It seems like almost every day the weather calls for snow, or cold enough temps to keep it around.  It’s not usually more than a couple inches, but it piles up and piles up and then we get hammered.  I’m excited, although a little anxious about Andrew’s lack of driveway-clearing motivation.  So far this year, I get the brownie points for shoveling, not him!

I also broke in my new trail running shoes I got for snowy runs.  While they do have some arch support, they aren’t as “motion-controlling” as my other shoes (Saucony Hurricanes) and I could tell right away when I started running.  Because they’re trail shoes, they have a bit more support on the balls of my feet.  For most of the run the roads were pretty clear, but there were a couple spots in which I was glad I had them on!  Also note the wool socks–they definitely make a difference in keeping my feet warm.  Thanks Nicole!  Now I just need to find somewhere to buy them that doesn’t charge $14 per pair…

I really bundled-up; I wore three layers on top and two pairs of gloves (my MO now) and a hat and was QUITE toasty, except for my legs!  I have running tights, but neither of them are very thick, so I might have to be on the lookout for a more heavy-duty pair.  Speaking of heavy-duty pants, I need some for the gym!  I’m an early bird (5:30 a.m.!) and man, is it COLD and WINDY out there sometimes!  I’ve been wearing the same pair of wind pants EVERY DAY to the gym (don’t worry; I was them weekly) and they’re from college and not that warm.  HELP! 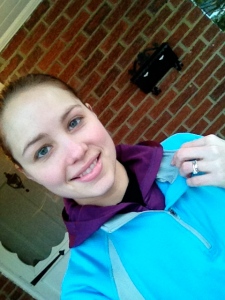 Forecast calls for more snow tonight–yippee!  Except that with our tandem driveway, I have to take the outermost vehicle to the gym in the morning, which isn’t always the Pilot.  Andrew cautioned me about driving the truck in the snow but I took it this morning anyway.  Thankfully, the roads were fine, but I wouldn’t want to be driving it while it was actually snowing.  I’m counting the days until we have a REAL driveway (and hopefully an attached garage)!