I pulled out all the stops today and made not one, but TWO new and different meals today.  For a lazy Saturday, I think that’s pretty outrageous, even for me.

Lunch was a stuffed tomato with leftover quinoa. 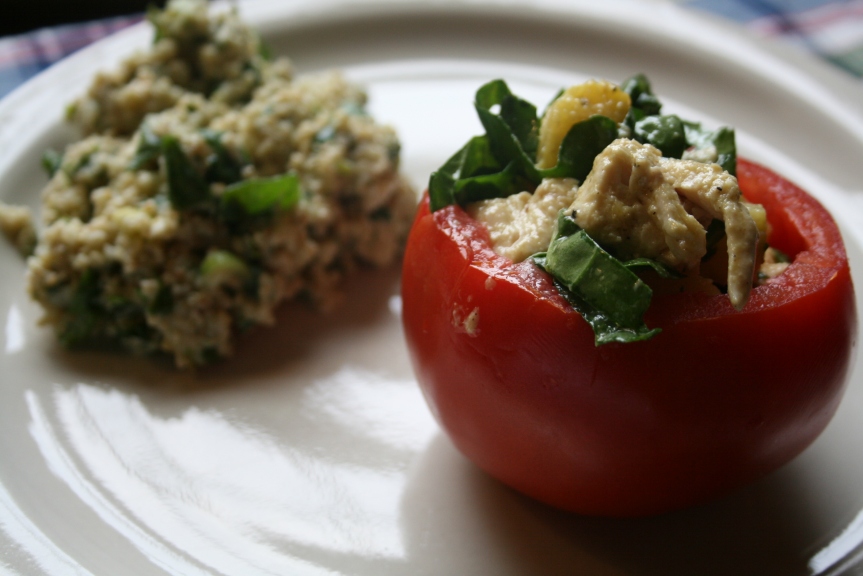 The beefsteak tomatoes cost me an arm and a leg ($3.50 for 2!), but it was worth it to hear Andrew approve.  The filling was a mix of diced, cooked chicken, pineapple and spinach, dressed with olive oil and dijon mustard.  It was a cinch to whip up and you could easily do just about anything with this…switch out the filling components and use ranch dressing or a balsamic vinaigrette, or you could always stuff a pepper.

After lunch we headed into EA; me to visit Abigail at Fowler’s and Andrew to spend some time at work prepping for a Monday telecon.  I “splurged” (not really since I ran THIRTEEN miles, but still) and got a scoop of Birthday Bash ice cream before leaving.  YUM.  It’s cake-flavored ice cream with swirls of blue icing.  Seriously amazing.

I picked up the mail at Andrew’s parents’ house and then he arrived from work and we left to run errands.  On the agenda:  buy Holly a new bathing suit.  This proved much harder than we thought it would be, seeing as it’s early August and pretty much everything that’s left is on the clearance rack.  And it’s either all tops or all bottoms.  How that happens, I don’t know…

After striking out at Target, Kohl’s, Swim City (it had a “For Lease” sign on the door…grrr) and TJ Maxx, we made a last-ditch effort and headed across the street to the mall.  SCORE!  JC Penney was loaded!  I was able to pick two different patterns to try on, and, thankfully, the one I loved from the moment I saw it totally worked.  It was meant to be.  And major bonus points to Andrew who was incredibly patient through all of this suit-shopping.

When we finally got back to the hotel, I hurriedly whipped dinner together.  Spicy Southwestern Tabbouleh, or, in this case, barley.  If you don’t know, tabbouleh is a classic Middle Eastern dish made with bulgar, parsley and mint.  I had just used up the last of my bulgar, so I substituted barley and cooked it earlier in the day.

It’s full of southwestern spices, like chili powder, paprika, cumin and allspice, and veggies akin to taco fillings: red onion, cilantro, tomatoes, yellow pepper and jalapeno.  I added avocado to mine and leftover diced chicken to Andrew’s.  It was a hit with both of us.  This is also a very versatile dish; you could use just about any grain here.  Brown rice would be a fantastic choice, and one most people have in their pantry.

I found these at Target today and thought I’d give them a try.

The coconut flavor caught my eye.  I’m obsessed with coconut-anything lately.  Not sure why…  A co-worked of mine a few years ago used to drink these all the time and I’ve been intrigued ever since.  I’m not a big mineral/sparkling water fan, but because I don’t like drinking sugary drinks, I thought these might be good.  Well…  I’m still not a sparkling water fan, and I think it’s a taste you have to get used to.  I’m also not sure coconut was the flavor to start with; they have other ones like lime or cran-raspberry, which might have gone down easier.  I am, however, willing to keep drinking them to see if I develop a taste for it.  It’s zero calories without an artificial sweetener, which is important to me.  Who knows?  I might be a convert in no time!

Tomorrow is our beach day with some of Andrew’s friends from work and Abigail!

One thought on “THREE homeruns in one day – score!”